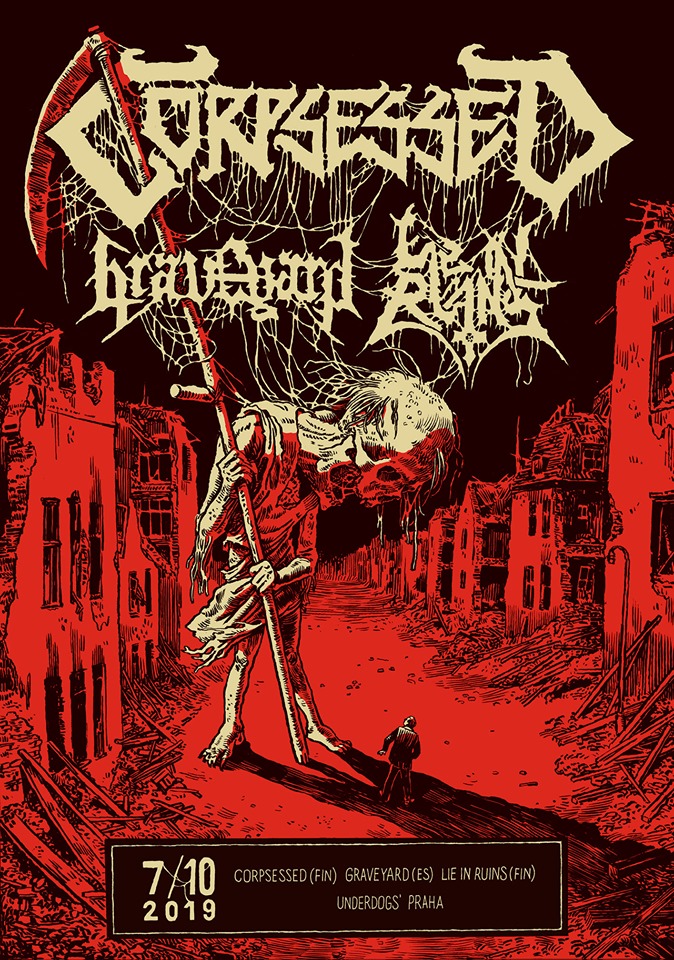 Corpsessed plays abyssal and harrowing death metal, drawing influences and combining the suffocating and crushing tones of doom metal, and the ghastly ominousness of black metal and horror movie soundtracks – weaving it all within the style of rotting and brutal early 90s oldschool death metal, especially in the Finnish style and tradition. This is what CORPSESSED are all about.

Corpsessed was spawned from putrescent slime in 2007 at the rotting houses of delta-area Ärvenpää, Finland. The 5-piece band started honing their abyssal death metal tunes and officially released their first EP titled „The Dagger & The Chalice“ on CD by Dark Descent Records (USA) and on vinyl by Me Saco Un Ojo (UK) in 2011.

Corpsessed’s debut full length album titled „Abysmal Thresholds“ was released in the beginning of 2014, and strengthened the band as one of the current torch bearers of Finnish death metal.

2018 saw the year of the bands second full-length „Impetus of Death“, an album that manages to top it its predecessors in terms of heaviness and brutality while taking their epic sound a step further.

The band is known for their dark brand of death metal that harks back to the old days of early 90s and has received high praise for their hard-hitting and suffocating live shows, appearing in such festivals as Netherlands DeathFest (NL), Tuska Open Air (Fin), Obscene Extreme Fest (CZ), SteelFest (Fin), Kill-Town DeathFest (DK), and NRW DeathFest (Ger) throughout the past 7 years.

The band has also played 2 successful European Tours with Cruciamentum (in 2015) and Undergang (in 2018).

*GRAVEYARD (us) – War Anthem Records*
https://graveyardofdoom.bandcamp.com/
https://www.facebook.com/pg/deathmetalgraveyard
http://www.graveyardofdoom.com/
Barcelona’s Graveyard currently belong to the most active bands within the Spanish scene, especially if you have a focus on the classical way of Death Metal. It’s a band that breaks the delusion that this particular style just has its monopol in the Scandinavian countries, the UK or Holland. Just take a listen to their brand new full length album entitled „Hold Back the Dawn“ released this year at War Anthem Records.

*LIE IN RUINS (fin) – Dark Descent Records*
https://www.facebook.com/lieinruins/
https://lieinruins.bandcamp.com/
http://lieinruins.deathmetal.fi/
Lie in Ruins was formed initially at the golden season of the old Death Metal in early 90’s, but was buried in the background for several years, until in 2002, dug up again from the tomb to spread the seed of evil now when the time was finally ready. After the first demo “…Monuments” was brought to light, it was time to get a new member to help with the guitar duties. This unholy trinity began working on new material. After the next demo “…Statues”, it was time to take the next step, and start spreading
the musical propaganda live. This required the recruitment of two new members and this time Lie in Ruins grew into five.

Meanwhile in 2008, the Spanish label Temple Of Darkness released an EP by Lie in Ruins called Architecture Of The Dead which was a compilation of the demos “…Monuments” & “…Statues”. Next year the split-7″ with Deathevokation, called „Allegiance in death“, was published by Imperium Productions.

In 2009 the drummer decided to leave the band before the recording of the debut album. Continuing now as four-piece, the band entered the studio and recorded ten desecrating songs for the full-length album called “Swallowed by the Void”. The album represented Lie in Ruins gloomier and darker than never before. By the release of the album the band had already managed to recruit a new drummer, enabling live attacks to continue.

The period between 2010 and 2013 consisted of playing live in Finland and also abroad, in countries such as UK, Spain and Lithuania. Slowly but steadily, the band also started crafting new material for a sophomore full-length release.

2014 saw the birth of “Towards Divine Death” which was released by the US label Dark Descent records. Lie in Ruins was also featured on the Finnish underground compilation “Metal on Metal – The IVth Crusade” by Metal Warning. While 2015 & 2016 saw the band playing some selected live gigs, new material was slowly being forged again. During 2017 Lie in Ruins once
succumbed to the depths of studio to record a new EP as well as two songs for a split release. By the end of 2017, the band shrunk back to a 4-piece form.

In 2018 Lie in Ruins resurfaced again and released the „Demise“ EP through Dark Descent Records. 2018 also saw the release of „The Legion of Desolation“, a split album with Purgaroty (GER). In late October, together with Purgatory, the bands embarked on a 5-date tour in Germany to showcase both bands deadlier than ever. With one more gig remaining in 2018, Lie in Ruins will finalize the song writing for their 3rd album and will hit the
studio once again in 2019.
HAIL DEATH!