Finnish top metal export Amorphis released their 13th studio album “Queen Of Time” on May 18th, 2018. The new album is even stronger, more varying and more mature Amorphis than ever before. A couple of days prior the release, I had an opportunity to exchange a couple of words with Amorphis’ guitarist Tomi Koivusaari, who has been in the band through its 28 years of history.

Mr. Koivusaari, hard-boiled by years of touring with Amorphis, has been recharging his batteries after the last tour and album recordings in Sweden. Proper sleep and the normal, everyday life are his means of getting the rest after getting off the tour bus and the creative process of “Queen Of Time”. After eight months of break, the band got to stretch their legs on stage in Karmøygeddon Metal Festival in Norway, on 12th of May.

Even though traveling is hard and days are long, it suits Koivusaari. “I think it would be much harder for me to lead a normal nine-to-five -life”, chuckles the guitarist.

“With every album, we set out to make the best album we have ever made”

Some bands lose their grip or start repeating themselves in the course of many years. Some break up. But Amorphis is not like those bands. Once more they have found something new and they seem to be in top-notch shape as a band.

Where does that flow and energy to grow and change come from?

Even though Amorphis has been the livelihood of its members for a long time, it is not possible to stick to the old and familiar routine. “We are ambitious about every new album we make and want to renew ourselves every time”, Koivusaari emphasizes.

“With every album, we set to make the best album we have ever made. We don’t want to just throw something on an album and then play old hits on the gigs”, says Koivusaari. “We want to give our audience bang for the buck with every album and every gig we do.”

It’s giving everything you got, but also good sort of routine

Giving everything to your fans requires a lot from the band, but also a competent and skilled crew on the road. Every gig is an ensemble of musical performance, memorable, and perfect audio mixing.

In Koivusaari’s opinion, a competent and reliable crew is a crucial wheel in the well-oiled touring machine that is Amorphis. The band is not the livelihood only for the members of the band, but also for the crew. A band that employs all these people can’t afford to stay off the road. If they would tour less, the crew would have to find other sources of income and then they might not be available when needed.

“We have told our agency to book all the gigs they can. We all do this for a living, and it requires us to really work for it too”, says Koivusaari.

Spending weeks and months on the road together is not always easy, and sometimes you might grow tired of the same faces around you. But active touring and hard work has also brought a lot of positive routines. Experience and professionality help to pull through a good gig even on a bad day.

“The sharpest edges have been softened during the years, though, and we give each other space also on the road if it’s needed. We have a good thing going on”, sums Koivusaari up in a relaxed manner. “But headphones are anyway a good thing on the road. They give some peace and time of my own if the dudes start to get on the nerves”, he laughs.

Tomi Koivusaari on stage in Nummirock 2016

Commitment to the band is one thing, that makes it successful, says Koivusaari. “Everybody has to prioritize the band. You can’t cancel the training session because you have sauna or you are going to go play kyykkä with your buddies. Otherwise, somebody is bound to have something else every time we try to play together. Everybody has to work on this 100%.”

The musical palette of Amorphis is varying and ample. The band has taken influences from many different areas of music during its history. On “Queen Of Time” the listener is surrounded by a vast sea of different elements, from massive walls of orchestrations and choirs to the basic instruments of metal music and Tomi Joutsen’s deep, vicious growls and soft, clean vocals.

“Our goal is that even after the hundredth time you listen to the album, you are still able to find new things”, Koivusaari explains.

It hasn’t always been so, though. In Amorphis’ early years the members were teenagers and their influences were strictly and absolutely restricted to death metal, that they were very much into at that time. The debut album “Karelian Isthmus” sounds much more orthodox death metal album than anything Amorphis has done ever since.

“At that time death metal was the only right thing for us. All the bands from different genres were ditched, even those we used to like a lot a year earlier”, Koivusaari reminisces.

“On the second album, “Tales From The Thousand Lakes” we decided very consciously to do our own thing, whatever people were going to think of it. It was a bit like “all or nothing” -situation for us back at that time. Our record label kept on asking if we were sure about it and knew what we were doing”, Koivusaari trails on the memory lane.

“If something makes us laugh while jamming, it’s bound to be good!”

The band has kept their own way ever since they started that path. There are no borders on trying and testing new ideas and things, all the way of it being really corny. Even though the professionality has grown through the years, creating music should not be boring.

“Well, if it’s corny enough to make our skins crawl, then it has to go. But if something makes us laugh spontaneously while jamming, it’s bound to be good”, Koivusaari says with a jest.

On “Queen Of Time” the effect of the producer Jens Bogren is also audible. For example, the choirs and the big orchestrations are originally Bogren’s ideas. Some of the original keyboards were also arranged to orchestrations to give depth and mass to the melodies.

Bogren has also had his say on the songs that were chosen for the album, and he had the final word on choosing the single- and video songs.

“The most important thing for me was, that we didn’t have to worry about if something was already recorded or some other thing already is done because Jens took care about all of that. It’s been hugely less stressful to do the recordings now that we could concentrate on playing and creating the music, and trust that everything else will be taken care of”, Koivusaari sums up the importance of a good producer.

“It feels like Jens was the seventh member of the band.”

Back to the original line-up, and then some

The line-up of the band was in almost constant turmoil for more than the first decade of its journey. The media still seems to write about Amorphis as if they would change members like socks, even though the latest newcomer before the bass player Niclas Etelävuori leaving last year and Oppu (Olli-Pekka) Laine replacing him, was Tomi Joutsen over a decade ago. 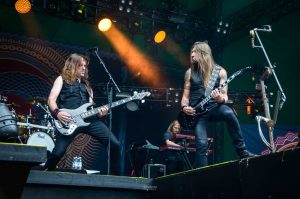 “Now that Oppu is back in the band we actually have the original line-up we started with, and a couple of extra”, Koivusaari points out.

“We didn’t have so many options when Niclas left. The Finnish metal circles are so small, and we couldn’t have gone poaching in our friends’ bands”, says Koivusaari. “I honestly don’t know what we would have done if Oppu would not have joined. A session musician wouldn’t have been an option for us in any way.”

Laine has settled back into the line as there never was 17 years in between. The difference to Etelävuori’s bass can be heard if you pay attention. “Niclas has a more straightforward style to play, where Oppu’s style is more prog”, Koivusaari muses.

There are no songs from Laine on “Queen Of Time”, however. “He had so little time before the recordings and we were on tour until we started to work on the new album. He probably had to raid his drawers for the songs, too. So, in the end, his songs didn’t fit the big picture of the album this time”, ponders Koivusaari. 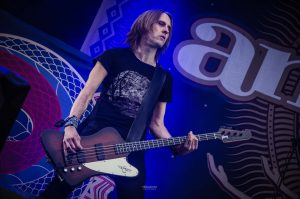 About the fashionable epic elements

Amorphis is not the only band to add bigger and more cinematic elements in their music. In metal music and especially in melodic death metal the epic orchestrations and soundtrack-like atmosphere seem to be in fashion.

“The technology has advanced so much lately, and you can buy plug-ins to make orchestrations by yourself on the album. We had a real choir and an orchestra to do those bits, though”, says Koivusaari. “Especially melodic death metal bands need to find their own thing and their own sound, because it is hard not to drown in the mass.”

On the other hand, Koivusaari has noticed an opposite reaction to the big and complex elements and fine-tuning. “I have noticed that many bands do recordings in the old school -way. Even small errors are left on the album, instead of fixing them with a clicking of a mouse.”

“We didn’t leave any flaws on “Queen Of Time” as such, but we didn’t fine tune it either. At some spots, I can hear myself, that there I played quite rough.”

Some songs from the previous album “Under The Red Cloud”, like “Death Of A King” and “Sacrifice”, were playing a lot in the radio stations, at least in Finland. Also the singles from “Queen Of Time” sound quite radio friendly. Is the radio play on your minds when you make the songs and choose them for the album?

“Well it’s always good promotion when the songs are played on the radio stations, but we don’t think about it when making the music. “The Bee” was clearly single-material from the beginning, though. It has all the elements on it, that we have on the album. And of course, there is no point in choosing the heaviest songs as radio-singles”, Koivusaari explains.

“Metal bands don’t really get that much radio play anywhere else, as they do in Finland. There are some special shows, of course. But also in Finland, we have the certain stations, like Radio Rock, that play metal, but it’s not that mainstream here either.”

“I know that some bands hire a co-writer to make a “hit song” for their album, but we wouldn’t do that. We don’t do hits, we do good songs.”

After the release of “Queen Of Time” Amorphis is hitting the stages in several rock and metal festivals, and in the autumn the tour will take them to travel the world again. On the upcoming US tour, they will be accompanied by Dark Tranquillity, Moonspell, and Omnium Gatherum.

Those who fancy Koivusaari’s whispering gurgle vocals on “Karelian Isthmus” have their opportunity on the gigs. He murmurs some vocals every now and then when Tomi Joutsen is busy with his own lines. Otherwise, his singing is not to be expected.

“I have always seen myself as a guitarist. On “Karelian Isthmus” I was the singer because I was the only one who could do that. Otherwise singing is not my piece of cake”, says Koivusaari.

Thank you for your time and words, Tomi Koivusaari, may the road be safe and full of wonders!

The original interview in Finnish on Metalliluola’s page

I am a Finnish metal music enthusiast, with a passion for photography. Combining those two I ended up shooting gigs and I love every second. I also love cats, horses and other furry creatures.