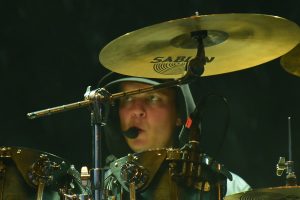 There have been quite some changes in Barren Earth lately either within the band line up or affecting the band dynamics. When there was never a doubt that Kreator would limit Sami’s [Yli-Sirniö, guitar] availability for Barren Earth the question arose how Oppu’s [Olli-Pekka Laine, bass] return to Amorphis would affect the band. And then of course already the tour with Insomnium and Wolfheart back in January 2017 brought more new faces on stage as for example due to Marko’s child being born not long before so his family had priority. So how are things right now with Barren Earth?

Meeting Marko Tarvonen was not exactly planned during Nummirock and even less the way it turned out to be in the end. But I met him along with all the other musicians and crew members from Moonsorrow, Rytmihäiriö and Barren Earth when arriving at Nummirock and saying ‘hello’ I took my opportunity to ask Marko if he would join my drummers’ series. Of course he would! When we met it took quite some time before we finally spoke of drumming. Very obviously Barren Earth matters a lot to him and he was eager to tell me about his perspective on my favourite band. I hardly spoke at all.

Without any specific question Marko says: “I don’t know what’s gonna happen to that band. We don’t want to quit it. We want to keep it alive somewhere there.” And he is happy to add that Barren Earth are invited to play at a very big US American festival in 2019. It will be the first time the band returns to the USA since the tour with three other Finnish metal bands back in 2011. “We have been a bit unlucky with tours and of course our daily schedules didn’t let us play more shows”, and he adds in a considerate and summarizing tone in his voice: “Yeah, that’s what it is.” 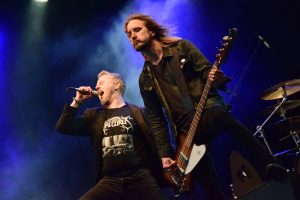 As I mention that Barren Earth is my favourite band Marko replies: “Yeah, we really like the new album very much.  Really, really succeeded in what we were looking for. A little bit different sound this time and with some new members in the band like Antti [Myylynen] on the keyboards.” I noticed earlier how much the older band members appreciate Antti in anyway. “He brought some different sound to what Kasper used to do. A bit more modern and updated keyboard sounds whereas Kasper [Mårtenson, keyboards] – he was more into these 70s sounds with Hammond organ and moods and stuff which is not a bad idea either. I love both sounds and players.”

The atmosphere between Kasper and his former band mates is apparently still very trustful and close. He attended their release gig some months back in Helsinki for the “A Complex of Cages” album. Marko speaks very highly and appreciative of Kasper and tells me about his current occupation and how much he loves this. “You have to do what you love”, he ends.

I word my somewhat floating thoughts that in my perspective it seems like Antti and Jón [Aldará, vocals] only sped up the musical evolution that was heading for the same direction anyway but slower before they entered the band. Marko confirms: “They both put a lot of effort for this band. You don’t really need to give them guidance what to do, especially Jón. He writes everything on his own. He writes his own lyrics and vocal melodies and arrangements. We don’t need to guide him whereas Mikko [Kotamäki, vocals] was pretty much ‘Here are the lyrics and the parts and sing like this.’ Then he did. He wasn’t really doing a lot stuff by his own. Anyway.” 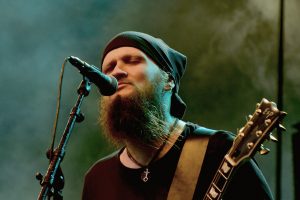 He continues: “Sometimes this whole thing with Barren earth has been a bit frustrating because nothing happens for a long, long period. Nothing happens, then an occasional show here and there. So you need to activate the whole system again, start from the beginning with the rehearsing. When like five or six years ago we were more like daily practising. But now we gave up the rehearsal place and everything. I don’t know. It’s kind of bad in a way. You don’t get easily active when you don’t have a room for rehearsals and gathering together.”

I mention that I noticed some differences between the two release shows and that they impressively well managed some technical difficulties. “I think we had three or four rehearsals before the first show, only. Yeah. I think the first show wasn’t really good. I think we had much tension and the Tampere show was more relaxed with all the fuck ups and everything. It was more the core and it came out very naturally.” 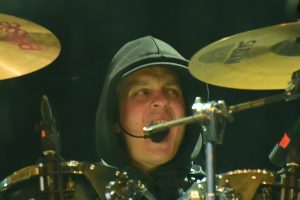 Marko just goes on: “It’s a shame, I could have done a few more shows in a row. Now when you are in that mood again and you are prepared and then all of a sudden it ended again. That’s what I mean. It’s a bit frustrating. Once you’re going into that mood and then they take it all of a sudden away from you.”

I am aware of the challenges the schedules of the many bands they’re active in mean for touring with Barren Earth. I found Kimmo [Korhonen, guitar] and Timo [Ahlström, guitar] (and Eero [Wuokko, drums], of course) very good stand-ins. “Time. But would rather do the gigs with our own line up.”

But if the question is touring or not at all? “Even Oppu told us when he joined Amorphis: ‘Look guys, you can do Barren Earth’ – even without him.”

During the January tour 2017 already I was thinking that Oppu is the one person that could not be replaced by whatever amazing stand-in and so a more than surprised “Really??? I cannot imagine Barren Earth playing without him. Not at all”, forces itself out of my mouth. Marko agrees entirely: “Yeah because he is primus motor in that band. Kind of the guy who formed the band and kept things going. And yeah he wrote the major share of the new songs. It would feel a bit weird to play without him. I wouldn’t do it that way but let’s see. We may have to do that at this American festival next year because we don’t know if Amorphis has something going on. He has to be there. He has some contract with them to do two years. He has taken that leave, yeah from his day job for two years. For two years then he is going back. He works for our government, house of Parliament as an IT assistant for parliamentary people. I am happy for him. He was yearning to play tours and music. So I am really happy. I told him: ‘Look mate, do it. Do it! Go there!” 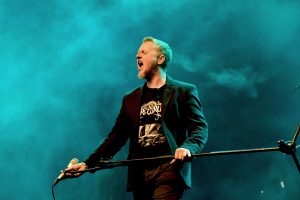 “He has nothing to lose with only pausing his day job”, I say. “Yeah now when he is still under 50 years.” I ask him not to make us feel even older than we are already with a frown. “Maybe he cannot do that anymore when you’re 55 or 60. I’ve been considering my future as metal drummer because it’s a very physical job to do especially Moonsorrow with singing a lot.”

And so we’re drifting into the actual topic of our appointment which is another story for another occasion. I had met Jón the night before attending the show of Septicflesh. He told me with a frown and a good deal of irony that they felt honoured to have such a popular warm-up gig for Barren Earth the next night: Saxon. The show Barren Earth played that very night was unique. The setting was extremely atmospheric underlining impressively the music. It was rainy and thereby quite dark considering the midsummer brightness. The wind from the lake added perfectly blowing the stage fog in thick clouds and soon off. Jón has remarkably progressed literally from show to show, never mind if I saw him with Hamferð or Barren Earth. But this Nummirock gig was the most expressive and intensive show he delivered I have ever seen of him. Yes guys, please, keep this alive!