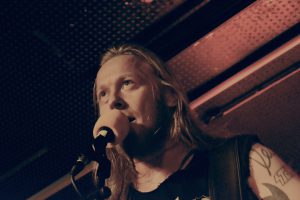 Winter is coming. Frosty air bites your face, even the tiniest drop of humidity is stinging like a needle in your skin yet growing beautiful white crusts at your beards and eyelashes and breathing burns harshly in your throat. You walk on a lonely plane in the bitter cold of an Arctic night. Below the frozen snow is crushing under your feet and above you Northern lights seem to set the sky on fire. … while Hyrde (Antti Hyyrynen) and Pexi (Pekka Olkonen) are shredding the riffs of ‚Viisi Laukausta‘ deep into your guts. Into your guts? You open your eyes to find yourself amidst a decent bunch of more metal heads banging joyfully in the flow of Kake (Tepo Velin)  hitting his drums.

The tour opening was everything but frosty. Stam1na, Skalmöld and Omnium Gatherum set the Nachtleben, a cozy club in the heart of Frankfurt/Germany on fire with a powerful show bursting  in abundance of the diversity of „Arctic“ metal, sticking to the tour name. 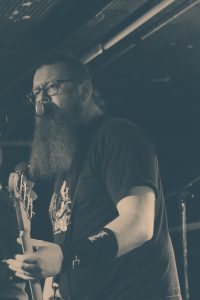 „What tells Arctic metal from the rest?“ I asked all three bands. „Maybe the extremes“, Bibbi (Snæbjörn Ragnarsson) from Skalmöd explains, „maybe it comes with the extremes. I mean you have all the snow and cold. And I said it before in other interviews, I remember so well all the times when my mother wake me up in the middle of the night saying ‚Oh look at the pink sky‘ because there was a volcano errupting.“ – „Literally next door“, his band mate Þráinn (Þráinn Arni Baldvinsson) fills in nodding to make sure I get the graveness. „And I was like, ‚Oh shit'“, Bibbi goes on. „Those extremes. And we have darkness like ten months a year, like almost constantly. And then it becomes bright in the summer. And then we have 24 hours of daylight for two months or so. And then it gets pitch black again. … All these extremes and you have to adept.“ And when I remind them that these features are very specific for Iceland Bibbi goes on, „I remember being in Lapland years ago. And I went out to  such cold as I had never been before. I mean in Iceland it obviously gets cold, too. But this was – 35 or even 40 °C or something. That is just a different version of cold. And then you experience the same thing with the Finns in their culture. This is just something you have to deal with. And I mean this is just part of the life. And it’s very exteme. And I think metal thrives kind of well in those situations. If you have to deal with something big. I mean no one is gonna play great metal if he’s just living in …“ – „…a perfect world“, Práinn fills in once more. „I mean, come one, it’s about something that shapes you. I think this is something that is specific to the arctic circle.“

And did we explore Arctic extremes? Oh we did. The finest. Speaking to Hyrde (Antti Hyyrynen, vocalist and guitarist) after show he pointed out that Stam1na first of all are honest in what they are doing. And being on stage should show all the fun they have and have had in 21 years of band history (my personal Stam1na experience started 2007 when they supported Apocalyptica on Eicca’s personal invitation touring in Germany – f* really already ten years ago?!). And here we meet the limits of the venue. The Nachtleben very much offers the intimacy of a potential rehearsal place of any of the bands we saw that night. But the venue is in the cellar and the ceiling is low and the light even lower (taking photos a bit of a challenge). If you have experienced Stam1na on another stage (perhaps back in April touring with Eläekläiset) or on a festival stage you will have faced metal passion exploding in all three dimensions, even reminding of martial arts movies, speaking in particular of Kaikka (Kai-Pekka Kangasmäki, bass player). I am happy to inform you that there were no casulties to report due to reduced space above the stage. 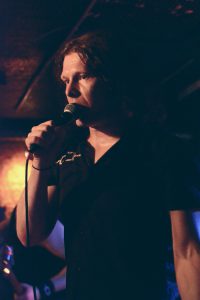 „What is metal?“ is a question that has kept my mind busy for a couple of months now. „It has to be the music. Because the music is the starting point of it all. Because without the music the other things could not exist. But in metal genre for my opinion it is really intense when it comes to the attitude and stuff like that. All the bands and the the people who come and see the bands live. So I would say it is the combination“, Jukka from Ominium Gatherum states. „I think above music it is of being true to do what you love to do“, Þráinn says. And Bibbi adds „We only wanted to play heavy metal. And that’s it.“- „It is about being true. Because too many times you see in pop music someone is doing stuff that he does not want to do“, Þráinn says. As I sum it up as an attitude that you either have in your heart or not comments Bibbi passionately:  „Absolutely. And there is no way of faking it!“ And in this point they agree fully with what Hyrde from Stam1na whose reply is the summary of both, the music as a core and the attitude of being true to what you do with all your heart and passion.

The Arctic Circle Alliance tours with the concept of one shorter special guest gig, Stam1na, warming up the stage for two full sets played in changing order Omnium Gatherum and Skalmöld.

At the opening show it was Skalmöld who played after Stam1na. Their set list was composed of mostly their more progressive songs. Long, intense tunes full of tempi breaks, fat choirs mixing  very harsh up to soft clean vocals – a composition of sounds as contrasting as the Icelandic extremes. „We want to be the best metal band in the world. We’re not. But we want to“, had Bibbi said earlier. But one thing is for sure they play with all their hearts when on stage. Really. I don’t know whom to highlight? The utterly happy smile of a child – that’s the keyborder’s smile being lost in his tunes? Or the vocalist, an introvert actually, being so deep in his thing that his passion for music outstands the introversion bearing a most charismatic frontman steering the banging crowd?

I asked all bands if they could imagine to come up with a joint project of all three bands and what it could be like. While Jukka – with passion shining in his eyes – would simply lock them all up in a studio after tour to see things happen as they will, Bibbi and Þráinn go for a movie. It is Hyrde who is set on fire by the thought. His eyes are sparkling and a I can kind of see the machinery of creativity working in his mind. Drifting a bit off, he repeatedly says „good idea. Really, good idea.“ He says he would need to think of it when actually he already does. Oh, I really love those moments when my interviewees apparently drift away in the passion for their music leaving nothing but a dreamy and utterly happy face.

When Omnium Gatherum entered stage a new, remarkably younger face appeared wielding the bass guitar. Pyry Hanski stands in for Erkki Silvenoinen who is traditionally busy with Raskasta Joulua at this time of the year. And this year is no exeption. I mention Pyry quite immediate as I am taken by the energy he delievers while yet meeting easily the technical standards of Erkki’s demanding bass lines. Pyry actually played in a (teenage) band named Casket from Lammi in Finland hardly known by anybody. But as Lauri Silvonen from Wolfheart and Bloodred Hourglass also derives from Casket, perhaps we should keep the band name in mind!

Omnium Gatherum open their set with ‚The Pit‚ from ‚Grey Heavens‘, the latest album. The highlight of their show in my impression was the live premier of the only recently released song ‚Blade Reflections‘. The powerful song is surrounded by an exquiste selection of songs from the last roughly ten years of Ominum’s musical band history covering some of their more quiet as well as faster songs. Just as always there seems to be a competition with the crowd about the unspoken question who is head banging more passionately? The people on or off stage? 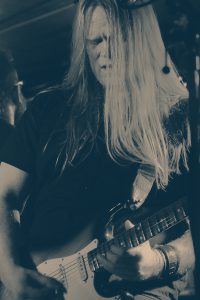 Being true to many metal bands means also being approachable. So no surprise – once Stam1na had handed the stage over to Skalmöld they were found at the merch stall, taking their time to speak with fans and joining them on photos or signing autographs. And of course, that is what Skalmöld did when Omnium Gatherum played their show, too. Meeting the musicians after show and even if only to give them a three words feedback to me is an amazing opportunity. And it is your opportunity, too.

I had, naturally, an odd question to all bands for the tour start as well. And I thought that a little more female esprit on stage could add to the great atmosphere on stage. So I wanted to know which female superhero or villain my interviewees would send the other bands as support on stage. They offered Poison Ivy, Black Widow, Rogue, Storm and She-Hulk.

As it seems, Hyrde is not much a comic fan. So my list of suggestions needed to be extended by some more names. And to make sure that Stam1na would have the best support possible on stage, he suggested first „Lara Croft“ to join them – because of her long hair, of course! As he is a generous person he granted his tour mates from Skalmöld some divine support from the range of Nordic goddesses of their own choice and „Black Widow for Omnium Gatherum, even though I do not know this superhero. She’s got a cool name“, Hyrde says. Funny enough, the role play veteran, Bibbi discussed a moment with his band mate Þráinn before they agreed to suggest Poison Ivy for Omnium Gatherum as support and  Rogue to help Stam1na. Rouge will have a tough job than as she will also have to assist Skalmöld, as Jukka suggested. He voted for She-Hulk to assist with Stam1na but would not be able to explain why, as he said with a ingenious frown.

I did a full interview with each band (Hyrde from Stam1na, Jukka from Omnium Gatherum and Bibbi and Práinn from Skalmöld) to be posted one at a time, soon. So stay tuned.

So what’s the bottom line? I wouldn’t miss a chance to see Stam1na live if only for their incredible energy on stage. Perhaps one might expect this diverse line up would musically not work for a joint tour. But then diversity is exactly the key to it. It’s the diversity in the range of bands as well as in the repertoir of each bands‘ music. While Stam1na show diversity in shades of faster metal, Omnium Gatherum are a bit more in the corner of the technically demanding and finally Skalmöld connecting with the more progressive facets. As then all bands play a carefully chosen set list in the most passionate manner the Arctic Circle Alliance is a show more than worth seeing coming to your doorstep.

Check out the tour dates