Barathrum and the origins of Finnish Black Metal

To us metal lovers from Central Europe, Finland often seem to be the promised land of heavy music, satisfying our hunger for melancholic, dark or even blackest tunes with a never ending flow of new bands. This is all the more interesting as the metal scene of our Northern neighbours is quite young – at least compared to that of England, for example. And while most of us might be aware to some extend at least about the Black Metal evolution including its, let’s say side effects, in Norway, what do we know of the origins of Finnish Black Metal the home of such traditional bands as Barathrum.

Barathrum’s mastermind, Janne “Demonos” Sova and the bass player, “Ruottokieli” Mathias Autio took one Sunday noon to meet me over a mug of coffee. Ok, yeah, you’re right. Their Finns. It was a bit more than one mug. 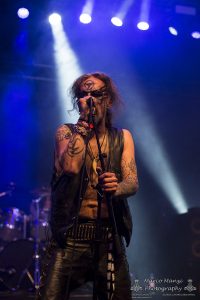 One of my favourite topics is the question of what is metal. It is something different to each of us and yet we mostly agree that we speak of phenomenon that exceeds the music which is the origin. So consequently we need to ask now what is Black Metal. And what does it tell from the rest? Do we speak of a mere subgenre of metal? Or do we need to broaden our scope as it is a subculture of its own? Could be a sort of religious movement? Or anti-religious? What defines the borders and origins of Black Metal?

Sipping our coffee, I move our conversation on my questions: “What is Black Metal? Is it music? Or is it more?” I can read “more” in Demonos’ face before he utters a low “More.”

“What more?”, I ask. “Far more. Black Metal, in my opinion” Demonos explains, “it starts from black anti Christianity and Satanism. It’s necessary for Black Metal. Otherwise it would be something else. And vice-versa thinking, I know these bands like Thy Serpent and Gloomy Grimm – fuck yeah! Not proud enough to say it that it’s Black Metal and Satanism but the dark side of human nature. For me it’s more like, I don’t know, first I was thinking I was not doing Black Metal at all. People started to call my music as Black Metal.”

“Pretty new back then?” Demonos sighs. “It was like three bands back then. Like Impaled Nazarene, Beherit and Barathrum.”

“And they’re all still there.” – “Beherit – yeah, he is alive but haven’t done …”, Demonos frowns and Ruottokieli says: “…. haven’t done music in a while. It was like seven years ago.”  But Janne opposes: “Engram was like six years ago.”

With this he goes back into the early days: “Beherit was like and Barathrum was like one bunch of guys from the Lapland. And we made it like a school project. We were all studying computer technology and electronics, me and Nuclear Holocaust Vengence (Marko Laiho) while and then we went with this school project band to some competition with other bands from other schools. They made similar projects. And we were not the best band

but we were the – how would I put it? – the most famous of them all. The winner band got a deal on a seven inch. But we were at the ending party of this competition playing on the stand because, we were like taking the audience!” Demonos laughs out loudly. “I don’t know, we were playing like Motörhead and Venom and …” he laughs again. “And then this band, which’s name was btw. Thrash Cruiser it separated in two parts: Beherit and Barathrum!”

Let’s take a short detour and explain who is behind Impaled Nazarene. Mika and Kimmo Luttinen, Mika Pääkkö, Ari Holappa and Antti Pihkala found the band in Oulu 1990. The line-up has changed very often.  For some years Wildchild/Alexi Laiho (Children of Bodom) played guitar in the band. Since 2000 the bass has been played by Mikael Arnkill who goes back to the band Abhorrence from which Tomi Koivusaari came to join his friends founding Amorphis also in 1990. 1990 again! And this brings me to another thing I had been wondering about for some time. There are so many Finnish metal bands that go like those four just mentioned here back to the years of the turn from the 1980s to the 1990s. And not few of them have always been around, provided fundamental input and inspiration for many musicians to come after that.

What was so special in the years 1988 to ’92 when so many bands started that have been around ever since and/or have become very big soon. ”You mean this turning point from ‘80s to ‘90s?” Demonos asks to make sure he got my point.

“Yeah exactly.” – “Actually it started early ‘80s already, you know?” And with ‘it’ Demonos means metal in Finland.

I do. “Often it’s missed how many metal bands there are in Finland. Here, it started like years before. I don’t mean only about Black Metal. I mean like Metal in general. I cannot speak about other kinds of music”, he says drifting into laughing again. “It started like Oz and Iron Cross and Zero Nine, Peer Gynt. Finland was like, you know, full of Rock’n’Roll and Heavy Metal before it got so big.” 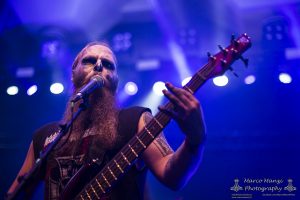 “Right, yes. And then it seems as if this was the fertile soil in which many seeds began growing after a kind of starting signal”, I go on explaining my question on a bigger picture. Demonos: “Actually I know the reason for it. It was the technology, you know, involved like to the point that we are now. Well, technology has become so easily used, you know. Everybody has now like computers at home and stuff.” Ruottokieli explains: “That’s why I got started because it is so easy to record at home. That’s how I got into music.” – “Like two decades ago you had to go to a f* expensive studio, you know”, Demonos remembers.

I point out that many studios that came up in the mid/late ‘80s are still there and some are among the most popular. “Yeah, they are. The best ones are still there”, Demonos agrees with me as we take another detour in our discussion. We make it, however, back to the original question: He further explains “Like me. I started it with like …. You know in Finland, we have this like free to use studios and stuff for the youth. It was a video works where I did my recordings from ‘90 till ‘96. Three first albums were recorded in a place like that. It’s for free use.”

“Cool”, slips my mouth while Demonos continues his story: “Now we go for this like Trumplandia where you pay for everything except if you do it by yourself.”

“But then you still have to pay the rent for the studio use naturally?” – “Of course”, comes from Ruottokieli in a split of a second. “Yeah, it was 16 (Finn) Marks that time per day.  But if you’re doing like commercial stuff it would be like 160 Marks per hour. So we were like ‘We are not commercial’!, Demonos tells me laughing once more.

I point out that in my experience none would go for commercial reasons but always to express themselves, the passion for music itself and so on. So the reason in the end is that some sort of creative energy requires channelling in this very particular style of music.” – “It is in a way”, Janne begins, “we chatted about this the other night with the other bassist, Tykkä [Nuklear Tormentörr], clean bassist.“ Janne points to Mathias. “He is lead bassist” – “Yeah”, he agrees.

Once more detouring Demonos suddenly says: “Yeah but hei, try to imagine this. If all the electricity would go away right now I would survive. I am so good. I am born in the woods”, he tells me with a superior smile in his eyes. Our conversation – even if a bit surprising – has come back to the point at which it began, with a man from Lapland. As stereotypic as it may sound, I learned that life in Lapland still strongly differs from Central European life. Naturally we don’t speak of idyllic imaginations of the Sami culture but basics of life that simply cannot work as we do know them. Life in country scarcely inhabited at all preserved – below the surface of nearly complete 4g coverage – somewhat archaic traits and attitudes. This certainly is not the reason for Finnish Black Metal originating in these landscapes. But then the rough upbringing certainly has to a very individual extend a part in it.

“You mentioned you came from Lapland.”  – Yeah, we have a reindeer farm” Janne replies.

“Which part of Lapland, by the way?” – “ It’s actually not Lapland, it’s Kuusamo. But I was born on the side of Lapland.” – “Salla, then?” – “Salla.” – “Nice spot.” Janne mentions that his family is partially still living there.

Thank you Janne and Mathias for your time. And let the other tradition, the Nummirock Metal Festival 2018 begin!