I met Björn Strid in the back stage oft he Tuska Metal Open Air Festival which is actually not the best place to take an interview. Apparently the organizers are incapable of providing a rather quiet room for interviews. So we sit more or less literally behind the stage with noisy traffic from the road beyond the festival area making it even harder to understand my interviewee. 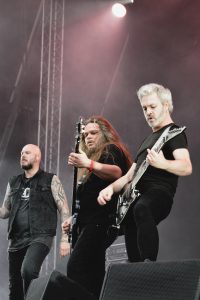 While Björn still complains on the heat of the last weekends, he spent on festivals in continental Europe I am very willing to exchange the rainy cold from Nummirock weather for one of his sweaty memories. So he considers it pleasantly fresh in Helsinki and feels great as we meet. “Oh yes we have been there when it was insane cold like 6 °C”, Björn comments his own Nummirock experience with Soilwork (2016). Then we finally come to the actual questions. I am curious to learn what it is like to tour with such large line ups consisting of four bands or if he’d prefer touring as headliner maybe on a smaller scale but with only one support gig.

Björn: “I mean it is usually a four-bands package. It’s not very often you only have two bands on a tour. And I think this was a really interesting package. I mean having Aborted opening who are one of the most brutal sounding bands I have heard.”

Björn: “It is insane, like musically and technically, it’s superior, you know, just crazy. So it was always a challenge to go on stage after them. And then having two classic bands, Kreator and Sepultura afterwards, that I have listened to, since I was 13. So I mean, that was a really cool tour. We shared a bus with Aborted. And then Kreator had their own bus, and so did Sepultura. So logistically it worked out pretty well. Nothing out of the ordinary. No. So it was a great tour with a great line up.”

“So even the chemistry was ok and all this worked out well?”

“I mean the bigger the mass of people that is travelling together the more likely it is that there are people among not getting too well along with each other. And then of course a tour is a very intense event so you cannot really avoid such a person as you might otherwise. ”

But Björn is really happy with the tour and its participants. “No it was really smooth, no fuzz. Nothing. Just great.“

“Do you think Soilwork did acquire new fans from the fan ranges of the other bands from the tour package?”

Björn: “I would think so. I mean I hope we did. And this is one of the purposes why you wanna join a tour package like this. Because all four bands have their own style and obviously Kreator ended up with the new album in the charts as well. You know. It is a great way of crossing over and getting new fans, of course. And having that challenge is very good for us. We were at our best.“

Björn: “I mean doing festivals is a love-hate-relationship. It all the flying and the early mornings and that’s really taking a toll on your body and mind. So I have a very mixed relationship. Also I mean, be there, play the show it’s always great and you meet fellow friends from other bands and so on.”

“It’s always a kind of a family meeting, isn’t it?”

Björn: “Yeah! But then I would say that I prefer to be on a tour bus. Because then you can rule over your own sleep. You can go sleep whenever you want. No lobby calls. No check ins. Cause that kills the fun as well.”

“Yeah, indeed I think so, too. But then on the other hand I’ve heard other musicians complaining that there is so much waiting time during the tour, getting a bit bored, ….“

Björn: “Yeah. Sure. It’s bit you can never really win.” – I frown and say: “Or maybe you can always win depending on the perspective?”- Björn: “Yah.”

“The last tour was quite long like roughly six weeks? – Björn: “Yeah, close to six weeks.” – 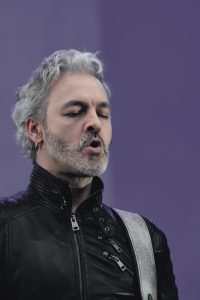 “What was the thing you missed most while you were on tour not being home?”

Björn takes a moment to think but then he says: “Hm as much as I can be a social person but it is definitely the privacy. Being able to do nothing. I mean it is hard to motivate yourself every night on stage. It’s not always fun. I mean if you do the same thing for six weeks – and I am not complaining by any means – it can be hard sometimes.”

I comprehend. We can’t have only good days. “Of course.“

Björn: “… to motivate yourself, how you are feeling and it’s all you know. To me it’s never been physically. I’ve never had any troubles like to physically cope with it. It’s more mentally. It’s all mentally.”

“So if you’re getting home from the tour is it like now I have to relax and get back to where I am or boah … now I am finally home again?” As Björn needs apparently a little more time to answer, I fill in that there are musicians having quite troublesome times to make it back into their home routines. There I can pace him as he confirms with some “yeahs” (more to himself than me) and nods during my question. Björn: “Hm, yeah you will get relieved when you come home. But there’s always a transition, it always takes me at least a week to sort of cope with being home. And everything happening, and everything being completely silent. That’s when you hear your tinnitus. Yiiiiiiiiiiihhhhhh. And then you come home and of course you do drink on tour everyday. I don’t drink as much as I used to but …” I nod and confirm. So he continues: “So that’s also a transition. It is always a little bit like a rehab when you come home although I have no troubles stopping. It’s always like ‘Yeah I don’t need to drink anymore’, you know.” I laugh as this side of the story is new to me. “But then after a week you think like ‘oh it would be good to hang out with some people’. Like non-musician people, you know. Your friends back home. What they normally do, when I come home, they ask like ‘hey, let’s party’” he laughs and I fill in: “Not yet again” with a smile. Nodding Björn says: “It is always a weird balance. It also feels good to be able to play for six weeks every night and coming home feels like an accomplishment in many ways. You feel proud as well.”

This is a perfect bridge to my next question, as I would like to know if there is still something he wants to achieve, some goal or something really big, yet achievable music-wise? Björn nods and says: “Yeah, I mean to tour with one of the good, old dinosaurs like I always wanted to have a Priest tour. That would be cool and I know that Rob Halford is a fan. So that would be maybe makeable.” 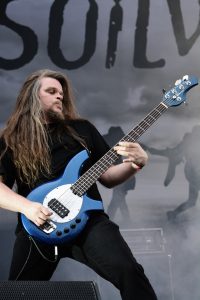 “So that would be really cool. A really cool line up.” Taking a quick look at my questions I have to smile. “Touring and playing festival easily gets you into weird situations”, I describe. “Is there one really creepy, ugly, weird, scary, or so fan gift you have ever received?” He inhales loudly and hums thinking with a frown. And than there is a simple: “No”, almost as if Björn was a bit disappointed himself on the answer. “Nothing really that creepy. Not as far as I can remember. I’ve had people who wanted to rub my head.” I have to laugh on the image I see immediately in my imagination unable to avoid this image. I find that rather creepy, I admit. But Björn continues: “ My shaved head and they started crying. I mean that’s scary as it is. But I mean it was not scary at all. But as weird as it gets. I don’t know”, he says apparently fighting some images in his mind, too, laughing at the same time. “Nothing really crazy”, he adds, “no dead rats in my mailbox or anything like that.“

I try to calm down by saying: “Sounds good then. But I have one last question that is always a bit odd.” And now that Björn has opened a bit, I go for the elephant question: “Imagine I leave and instead of me there is an elephant popping up here. I mean a real, big elephant. Not a hobbit elephant. And this elephant follows you at your heels. And there is your gig to come soon. But this elephant is not to be shaken of. How do you make sure this elephant following you on stage will not ruin your gig?” Björn tries hard to remain serious while I explain the situation. He hums confirming a couple of times. He sighs. “Wow. At least that is the weirdest question I have ever got.” He looks a bit overwhelmed. I can’t help a “I hope so” slipping my lips. Björn still is having a hard time to find a solution for the mighty problem. “I’ll send him to a…. “ But I insist: “It’s not leaving.” – “Ah, ok … it’s not leaving ah? … I think we can make it a nice affect if we can get the Royal Copenhagen to sponsor the whole show.” This is actually a really cool idea I think but cannot say as I am laughing. But it seems Björn noticed that this might take some time to arrange and remarks: “So the elephant will break all the porcelain on stage … that’s how the show’s starts.” – “No elephant music than?” I wonder. “No, but it would be amazing if he could shoot spears from his trunk.” – “Oh yeah, this sounds like a really cool affect.” A particularly cool idea, I frankly admit.

I thank Björn a lot for meeting me. I really do! And I can’t help but after this final question he seems at least bit relieved I am not coming with more weird questions. So we shake our hands good bye. And I long for a coffee before shooting the next gig, which will be Soilwork, of course!