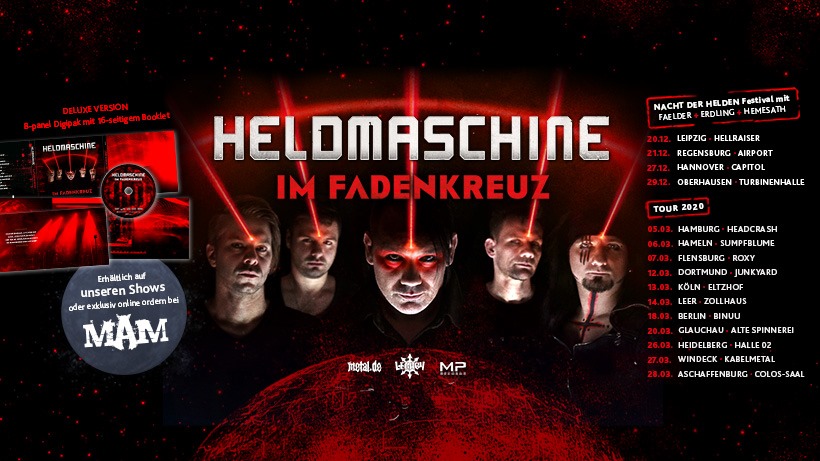 Isn’t it the Maschinist who gets an engine running, who ignites the initial spark? Heldmaschine had a support band that could not have been any better, they had their own “Maschinist”! As many of the fans have known Heldmaschine personally and followed ever since, the family reunion could begin. This being said, it was a funny side fact that the venue “Musiktheater Rex” in Bensheim is sited in former factory hall, perfect for these two Industrial bands. 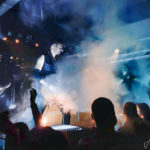 It has been quite a while ago that I watched Heldmaschine so I was very curious about the development of this remarkable band.

They shaped up in 2009 as the Rammstein-coverband Voelkerball and set the level extremely high for their competition or better colleagues of other cover bands. Only a few years later in 2011, they moved on to become an independent band with their own songs and called it Heldmaschine. Of course, their early main influence was Rammstein, but that is something you can say about most Industrial Metal Bands and those of the “Neue Deutsche Haerte”.

Anyway, they unfolded and developed their own unique sounds based on the vocals of René Anlauff, nowadays the band consists of him, Tobias Kaiser and Eugen Leonhardt on guitars, Marco Schulte on bass and Dirk Oechsle on drums, all five very highly skilled and educated professional musicians,

So what would we expect today and what would be delivered because it was also the final show of the tour supporting the brand new album “Im Fadenkreuz”? 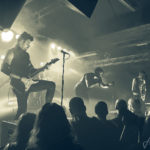 What we expected first was some-ish support band we would barely know. We received a band from Nuremburg, the town that is mainly known for a toy fair, ginger bread, the Christmas market and some sad years of German history. But I can tell you, Machinst were great! They delivered more and better than a usual support band would. So forget for the other, less important Nuremburg-associated terms. This band is the main case for the future.

After their foggy intro Maschinist played ten songs in a quite rough and authentically own industrial style, amongst them “Das Feuer”, “Kauf mich”, “Falscher Prophet” and “Dick”.

Not to forget is the first birthday song of the day! This was for singer and co-founder Stephan, even Heldmaschine joined the stage to raise the glasses and sing it along with us all.

Certainly, not the last show ever and end of the road but only the final show of the current tour, of course…

The starter after an again the foggy but also rolling and gliding arrival of the band on the stage was the first song of the new album “Leck Mich Fett”, followed by a perfect mixture of old and new songs, and it already took away the audience. 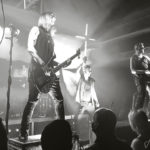 What a difference to the early years!

As already mentioned above, they just released their new and fourth studio album “Im Fadenkreuz”.

And really “just”: There was no big announcement, no video excerpts from the recording, neither big promotion, nor the usual marketing strategies but just out of the sudden; a “By the way, we made a new album, it is called “Im Fadenkreuz”, you can buy it now” which is a very refreshing way of (not over) promoting it – and guess what, it sells though!

Now they are not 100 but 120 % Heldmaschine, rougher than ever, not only focused on Industrial Metal but also more like a classical metal band with skills which would be wasted playing only one style. Lyrics and song structures have improved a lot over the years and are way ahead of mainstream music. Some songs are very society critical such as “Luxus”, or self-ironic as “Klingt Wie Rammstein” and some are just plain and straight Rock ‘n’ Roll music and entertainment at its best. 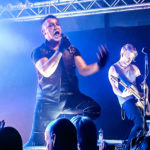 The two highlights of the show, of course, were firstly, René crowd surfing to the bar, right in the middle of the venue, only to order a freshly tapped pint of local beer (other singers have done worse here), and the secondly, the further birthday song of the day. This one was for Dirk, Heldmaschine’s drummer who turned “one year older” than vocalist René. And this time Maschinist joined the stage to celebrate it together with him, the band and the audience.

After two short and entertaining hours, Heldmaschine finished – as they said – their last show – but only of this tour, they will come back for another four shows later the year.

The Party & The Prospect – The End Of The Last Show

Heldenmaschine and Maschinist would invite the audience to meet them around the merch, not only to buy some t-shirts, CDs or other items, collect autographs and photos with the members of both bands, but also to celebrate and talk altogether, share a drink together and just enjoy the evening.

I am pretty sure, Maschinist will once be as well known as Heldmaschine are now.

I hope Heldmaschine will soon take over the pole position of the Neue Deutsche Haerte before long because it is the position they deserve. Nowadays they are 120 % true Heldmaschine, no compromises, no comparison, no fake heroes. Anyway take your chance to find out yourself – their tour is to be continued in 2020!