Harakiri For The Sky on stage in Metal Crane 2018, Helsinki
English

Harakiri For The Sky: Dark poetry from Austria

Austrian post-black metal band Harakiri For The Sky released their fourth album, “Arson” on Friday, February 16th. We had a little chat about the new album and some other topics during their short tour in Finland in January.

A two-man creative project, but like a little family on the road

The creative decisions in making music and lyrics are shared between the two men. Matthias writes the music, makes the arrangements and plays the instruments in the studio, and Jimbo is responsible for all the lyrics and vocals. The roles are clear and everybody knows them.

“Of course occasionally there are some things we are unhappy about, and then we talk about it. But usually, that is not the case”, says Matthias.

“We know each other for so long”, adds Jimbo. “I always like to tell the story of how it started, because it kind of points out what the band is all about.”

“We two were drinking at my place and listening to ‘Woods Of Desolation’. We were thinking: ‘Why don’t we do something like this, something different from what we did before with our other bands.’ And this is how it all came together”, tells Jimbo about the birth of Harakiri For The Sky.

“We are just two friends who want to make music that we both like. We don’t want to be restricted by other members. There is just me doing music and Jimbo doing lyrics, so we can both do exactly what we want”, Matthias sums up.

On Arson, the drums in the studio were played by Kerim “Krimh“ Lechner (Septicflesh, Decapitated). How did Lechner come onboard?

“He is a good friend of a friend of mine, and he was in Austria a couple of times, so I showed him the pre-productions and he was interested in hopping in. It was really nice to work with him, because he is just so professional“, tells Matthias.

Harakiri For The Sky has a stable live line-up, even though the band is always mentioned consisting only the power-duo. What are the roles of the other members?

“They are guys who play our songs live. I give them the sheets of music, and then we rehearse together”, says Matthias. “But they are also good friends of ours. It’s not like we hire them just to play with us, it’s more like we are really good friends. Otherwise, it wouldn’t work to be on tour for such a long time. We have become like a little family”, he laughs a little. 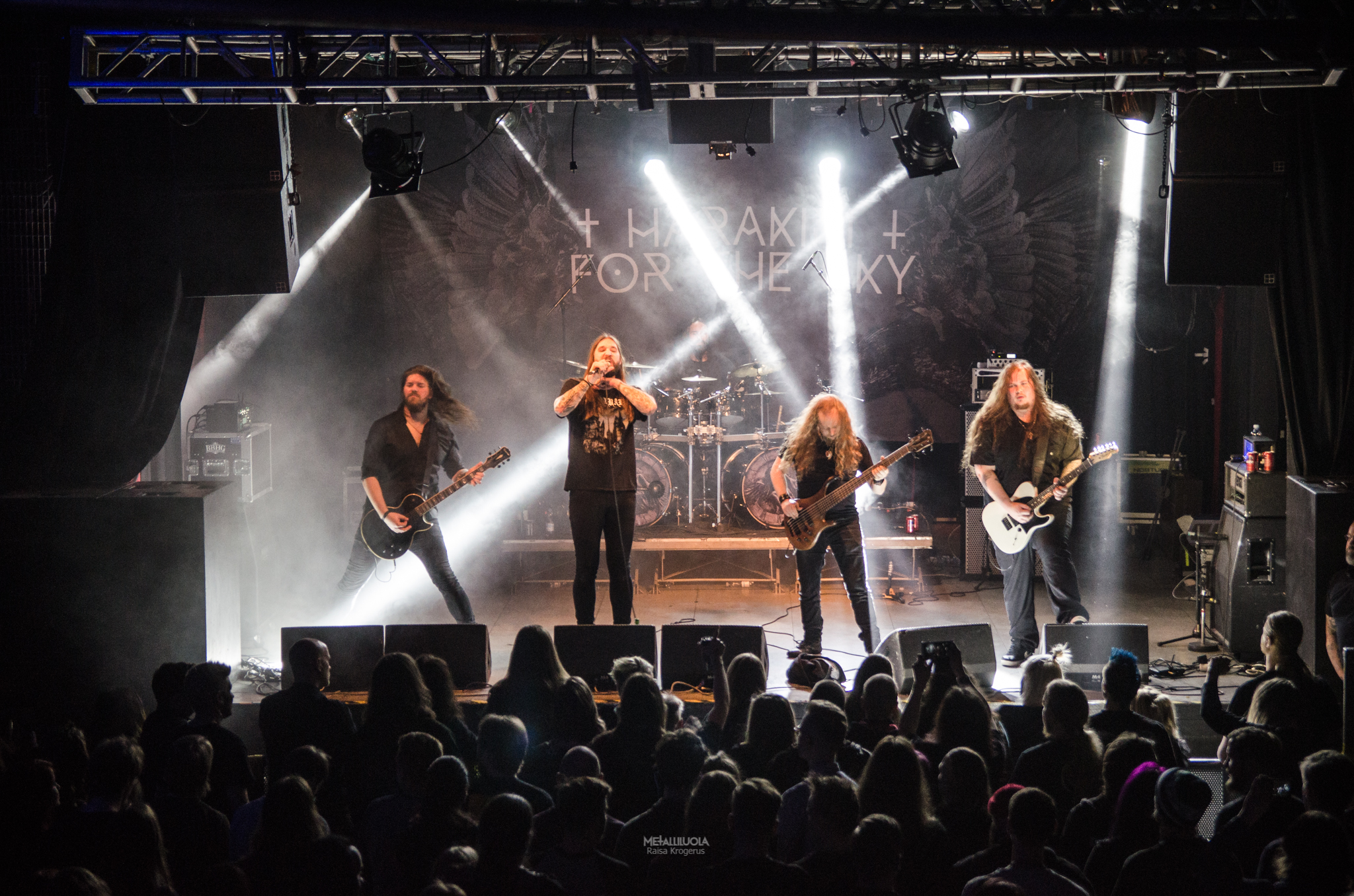 Harakiri For The Sky on stage in Metal Crane 2018, Helsinki

Harakiri For The Sky got wind under its wings quite fast after they started making music. They found a recording label, Art of Propaganda soon, and released their first album carrying the band’s name in 2012.

Two years later the band toured for example in Sweden and released their second album “Aokigahara”. The third one, “III: Trauma” was released in 2016 and Arson in February 2018. Harakiri For The Sky keeps up a nice and steady cycle in the recording. Many bands try to keep cycle like that with effort and some labels require it.

How is it with HFTS?

“It’s more like a coincidence, we haven’t planned it”, answers Matthias. “One of the many reasons we stay with our label is, that we are not forced to it.”

“We got offers from other labels too, but it’s often just business business business. It takes away the fun. They just see the dollar signs in their eyes and they will drop you if you don’t sell enough albums. I can’t work with people like that”, says the multi-instrumentalist Sollak.

Too rapid publishing schedule gets the duo’s judgement. “If you are forced do some material just because it says so in your contract, you have to just put out some shit to fulfil it. There is no sense in that”, says Matthias and Jimbo agrees heartily.

I am chatting casually with two nice and polite dudes about how they play their favourite music with their friends. The contrast between this relaxed conversation and the pure angst, depression and aggression in their lyrics and music is astounding. 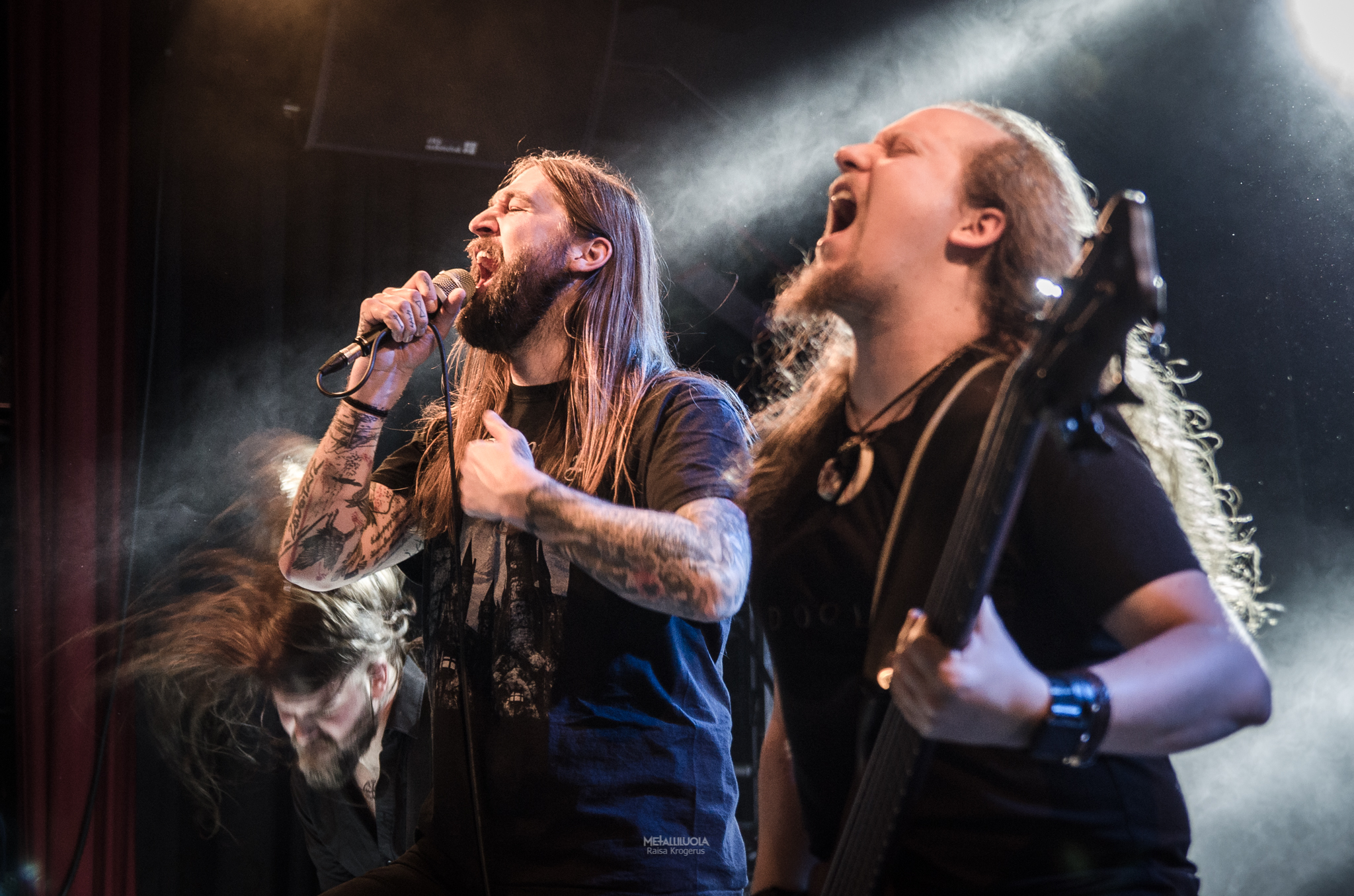 Scream like you mean it. Harakiri For The Sky on stage in Metal Crane 2018, Helsinki.

What influences the duo and where the inspiration rises?

“I’d say life on a daily basis. When I talk about the lyrics, it’s life, broken relationships, all the things that happen in the life of a young adult”, says Jimbo.

“I think everything around me influences me some way. To me, it’s also therapeutic to write music. I can express my emotions better with melodies than with words”, Matthias continues on the same line of thought.

The themes in lyrics vary from reflections of broken relationships (i.e. “Fire Walk With Me”, “You Are The Scars”), family tragedy (“Tomb Omnia”) or drugs and other substances (“Stillborn”, “Heroin Waltz”).

“‘The Graves We Dug’ is about this madness, this mayhem we live in. It’s about the life that I and most of my friends live, with all this drug-related stuff and personal struggles. The lyrics say “Now we sing and drink beside the grave we dug”, and it refers to what we are doing, we dig our own graves quicker than it should be. We would grow much older, I think, if we lived another lifestyle”, Jimbo opens the lyrics of the song.

“‘Heroin Waltz’ is for sure about drug abuse and addiction, but it’s also a metaphor for all that the heroin addicts are doing. All their life they are searching for a warm place where they are welcome, and this is what the drug does to you, you feel like being in utero, like an unborn baby in the womb of your mother. It’s a search for something, like a place called home”, Jimbo says, musing the thoughts behind the song.

“To me, home is such a vague concept, I can’t stay in one place for more than three days. It is actually part of my life, I am half of the time in trains or something. It’s not that I don’t want to be at home. I want to be there, it’s just this unrest I have, I always have to go somewhere else”, Jimbo ponders, and continues, laughing: “I also compensate that with two bands.” 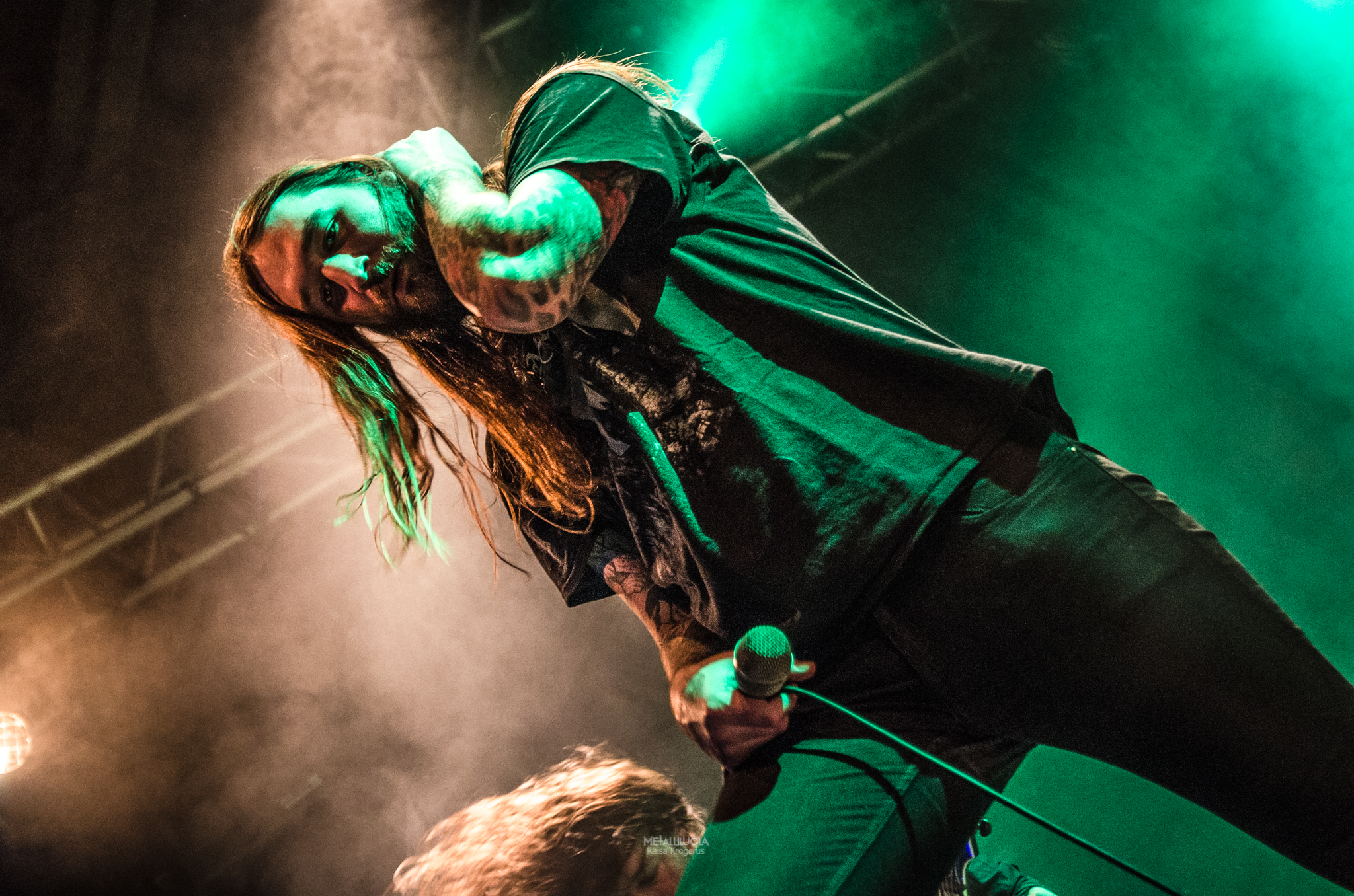 What influences were most present on Arson and how does it differ from the previous albums?

“I think it’s still very personal, but a bit less direct. Maybe the metaphors have evolved a bit”, ponders Matthias.

“It doesn’t tell a story from the beginning to the end like Trauma did. Every song on Arson is more or less its own chapter, and not as direct as on Trauma. The story on Trauma was one special occasion that happened about the time I wrote the lyrics for it. On Arson all the songs are their own stories”, Jimbo continues about the lyrics.

“I could be more creative because I didn’t have to go from the beginning of the story to the end. So I had more metaphors than I had on previous albums. The songs are written more like poems, and not like a story”, says the poet of the duo.

“It’s easier to sing along”, sums Matthias up, with just a tad of un-Austrian dry humour.

After the obligatory Finnish lesson and going through the Finnish words Matthias and Jimbo have learned (myötähäpeä, kalsarikännit, välikuolema and paskanmarjat), talking about the differences of German and Austrian mentality and the perks of British humour, we move on to talking about touring life.

“Finnish metal people are fun. First, they just sit around quietly, and four hours later they are completely drunk and very talkative. That’s quite nice”, says Matthias, describing Finnish personality quite accurately in so many words.

Where is the best audience for Harakiri For The Sky so far?

“Actually, almost everywhere except in Austria”, answers Sollak, and Wahntraum agrees. “France is going really well and so is Spain.”

“Germany. We sell a lot of albums and we have a lot of gigs there”, continues Jimbo, and Matthias quips: “Because it’s close!”

“Also because Germany has the biggest community of metal fans. I think album sales in Germany is very good in metal music”, Jimbo adds more seriously.

“But also Russia was good. We didn’t expect that much, but in the shows, the people were really crazy”, says Matthias. “And in Moscow, the show was also sold out.”

All in all, touring in Eastern Europe is a bit like an adventure.

“People are very cool there and they have a better atmosphere in the concerts. Sometimes it’s a bit complicated with the organization”, Matthias says. “It’s very rock’n’roll there. The organizers don’t speak English, and every question you have, they just bring you a bunch of beers and at the end of the night you still don’t know where you are supposed to sleep.”

“It was kind of funny five years ago when we started this, but nowadays I don’t think so funny anymore. It is a job, it isn’t just drinking with your friends”, Jimbo adds. 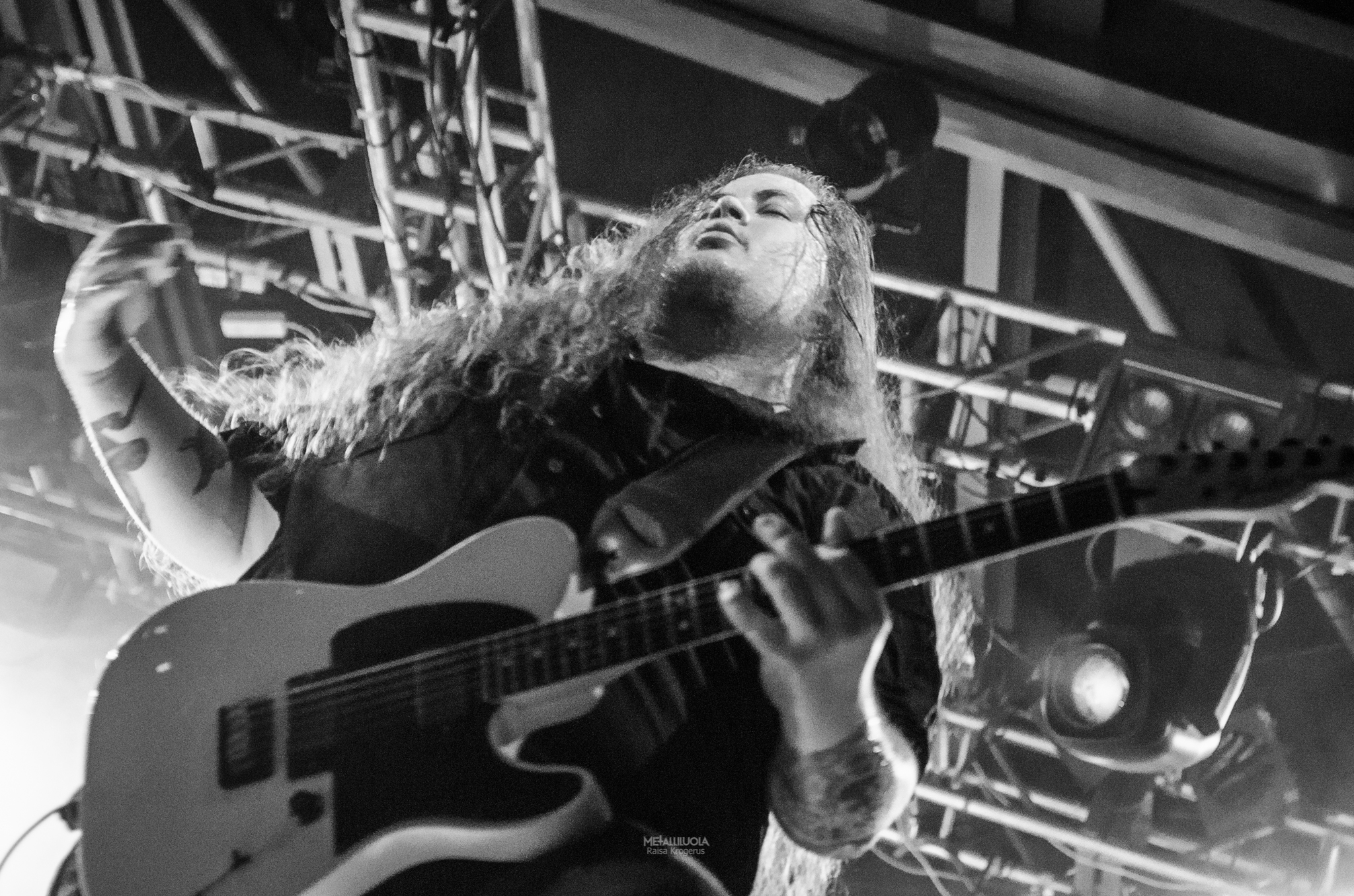 Main parts of the spring will be spent on the road around Europe and summer means some festivals. Touring continues in the autumn.

“And we’ll make the second European tour for the new album in December”, Jimbo continues.

Come say „Hi!“ and have a beer with us

Thank you for the interview! What would you like to say to our readers?

“Greetings and thank you for the support to everybody who likes our music. We love to see you in the shows”, says Matthias. “We are always up for drinks and talks, too!”

“You are!” corrects Jimbo, but I have an inkling, that he is as much available for talks and drinks as his colleague.

I am a Finnish metal music enthusiast, with a passion for photography. Combining those two I ended up shooting gigs and I love every second. I also love cats, horses and other furry creatures.