Obscuro: Congratulations on the positive reception of the new album and on the coming European tour with Omnium Gatherum and Wolfheart. You guys deserve the success. First let me ask: how does a Nothgard song get made? Is there a main songwriter in the band?

Dom: Basically I come up with all new material. So I start to write a song on the guitar, set up a basic drumtrack & add keyboards/orchestrations. At this point the lyrical theme is already in my mind. Afterwards the band gets the songs, add their ideas and Felix Indra (Drums) composes the real drums.

O: The new album “Malady X” has a very elaborate production and instrumentation, can you tell us a bit about the work that went into it?

D: First of all thank you. It was a long process or in other words an intensive process. We started working on „Malady X“ right after the European tour in 2016. This time we decided to do everything except the Master by ourselves in our studios. This gave us the option to work on every single detail – day and night. Honestly I cannot count the hours we worked on it but it was a lot and took all of my time over the last 2 years. The final master was done by Jens Borgren, who has also worked for bands like Amon Amarth, Arch Enemy, Opeth, etc.

O: You started out as a pagan metal band, so there were some black metal leanings initially. What prompted the stylistic shift and would you say that there was a break with that style or that there is continuity?

D: I would not say that there was a real break. We composed our first album very long time ago and over the years we tried to find an own sound on the one hand. On the other hand our personal influences changed and we oriented bit more into melodic death metal. Anyways there is a lot of continuity within the albums. Especially our 3 last albums. The first was bit different but it is not like we completely changed the sound. We simply use less folk instruments nowadays. But I also think that our new songs are more straight forward. Especially the lyrics mean way more to me. They are about real experiences and things that matter much to us. 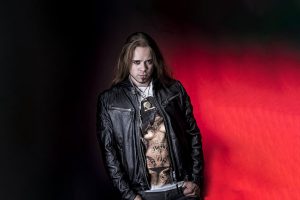 O: What song from the new album is your favorite to play live?

I think „Epitaph“ and „Fall of an Empire“ are my favorite tracks to play live.

O: You have signed a contract with Metal Blade Records. When did the label approach you and what do you think signing with them will do for the band?

It was in autumn 2017 when they asked us if we would like to sign. Of course we were really happy. Metal Blade is a renowned label with a huge distribution structure behind and as we wanted to make the band grow it was a very great step for us.

O: What festivals have you played this summer? Are there any plans for the summer of 2019 yet?

D: In 2018 we have not played many festivals as we were still working on the album. There were few – 6 or 7. For 2019 we have already booked some cool festivals and there will be more for sure. We will probably do another tour in 2019 and try to also set over to the US if possible.

O: As the guitarist of Equilibrium you must tour a lot and see many places, what are some of the remotest places that you have played in? Are there any plans for a tour with Nothgard outside the old continent?

D: Well there are really some special places. For me it is always interesting to see countries like Colombia, Mexico but also Taiwan, Japan or China. It is something different and a great experience for sure. As mentioned above we are planning to set up a tour in the US but are also working with some people in Asia to spread our music in the far east.

O: Do you have a favorite era in music that inspires you and that you always go back to?

I wouldn’t say that I have a a favorite music era. I think most fondly of the music that I was listening when I was about 14-15 and was practicing the guitar for 10 hours a day. There was „just“ school and nothing else. There was the freedom to practices and listen to every kind of music I want. It fells like this time was really easy going, hehe. In those days I listened a lot to Yngwie Malmsteen, In Flames, At the Gates and many others. But honestly I like what we are doing nowadays so there is no need to go back.

O: What are some of your favorite melo-death albums from the recent years, the ones that really stuck with you?

D: At the Gates‚ „To Drink From The Night Itself“.

O: What is your favorite melo-death album of all time? One that really “sold” the genre to you?

O: When was the last time that you felt star-struck when you met some of your favorite musicians in person?

D: I think it was on our Equilibrium tour with Dark Tranquillity when I met Chris Amott. I don’t know why but It is because I really think he is a fantastic player.

O: Thanks for your time Dom, I hope you’ll have a blast on your European tour.