“Macro” is consequentially the name of the just released album following JINJER’s recent EP “Micro”. An album considered Djent or Progressive in any way is hardly trivial enough to make a relaxing background entertainment for office work but perhaps your kickboxing workout. And yet this could not at all be an adequate approach to JINJER’s music. “Macro” demands the listener’s complete and undivided attention which is the key to open the portal into their world of multi-layered arrangements, complex and yet harmonic tunes, an abundance of deepest emotions, groovy bass lines, hardest drumming and last but certainly not least Tatiana’s amazing vocal range. Thus, the album is unmistakably JINJER’s handwriting and still new, fresh and surprising.

“Is it lonely on the top?” Tatiana asks us in the chorus of the first song that cuts the silence with a loud and energetic intro as a sharp contrast to the harmonic middle with a catchy chorus and an emotional acoustic part later on. The lyrics discuss the path to success and what it takes from us. It is a fight and even winning it, has a price. Industrial soundscapes in the intro adapt our world dominated by the everything-is-a-business attitude and greed.

Everything we do, experience or encounter has two sides – at the very least. Each story can be understood from several angles. And as thus, there is no absolute truth in this life, in this world. Truth is subjective. Always. So truth is complex, just as life is. JINJER’s music is a mirror image of this somewhat philosophical approach to our being. In that regard, JINJER’s music is a transition of my own attitude (and fate). It’s loud and screaming but carefully whispering and smooth. Heaven and hell. Following this thought, we enter the realms of a movie, the dark soundtrack of which is “Pit Of Consciousness”. It is a movie that tells in brutal plainness the truth of the hardest fight of all we can face. It’s the fight against and for ourselves, when life is challenged and what seems the light of salvation is actually your path into eternal darkness. 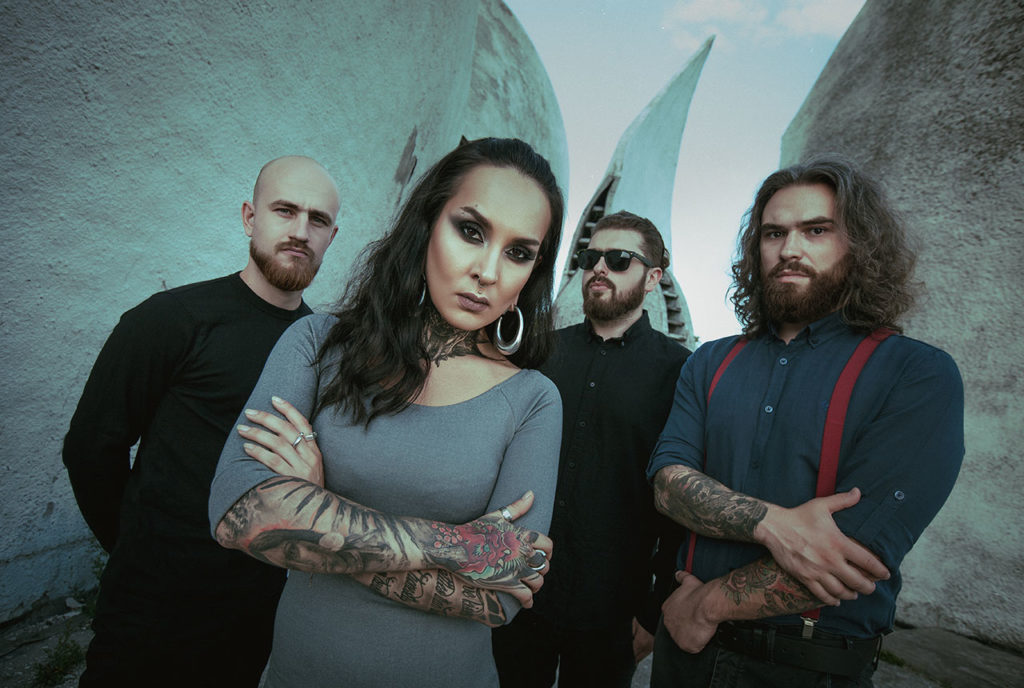 “Retrospection” begins with a passage that could be a perfect intro to a folk song as much as a sad French chanson. The first verse comes in Russian which added to the melancholic atmosphere of this part. The otherwise very aggressive and energetic song addresses homesickness and on more the philosophic side the question home coming. The torment those wishing-back-moments can mean is perfectly described by the aggressive instrumentals as much as Tatiana’s harshest growls. A hurricane of pain as a counterpart to the melancholy of the intro.

A thunder storm of Vlad’s hammering drums and Roman’s darkest guitar riffs kick the listener’s ass and turn a sunny day into a ‘Black-Metall-ish’ void. Had I ever asked for a song that explains what happens to Jazz going to Extreme Metal, “Pausing Death” made the reply. Its complex, interwoven instruments are the foundation of a very fast main theme slowing gradually down over the duration the song, and then a break, a switch and an entirely new soundscape! Some sort of innocent sweetness of a simple pop song is followed by more breaks and a then again complex tune less: brutal, clear vocals with partially acoustic instruments. A worthy musical metaphor for fighting death.

Tatiana’s vocal range of infernal harshness up to sweetest clean singing comes with new variations such as in the later parts of “Home Back”. Genius, by the way! Her capacities from all steps down-to-hell growls to ear-piercing screams in the full spectrum from creepy to threatening is most impressive and well reflected on the album. My personal wish would be to give her no less spectacular clean singing more space to come up with more surprises – on the next album!

More than two years ago, I met Eugene for the first time and we had an inspiring conversation on bridges crossing boundaries in many ways and both being sorry for the (Nu) Metal having lost its innovative power. He also said I shouldn’t be too surprised to find JINJER coming up with Hip Hop song in the future. I don’t see they have so far but what I hear is Tatiana rapping that, however, in a more classical meaning of the term. In “The Prophecy” for example her more spoken than sung clean vocals are striking hard as metal, an accusing, blaming verbal punch. And certainly there are more features from planet Hip Hop that I pass me unnoticed as these worlds are mostly foreign to me.

“Perennial” (Micro) reminds me – all the more when taking the video also in consideration – to the British TV series “Penny Dreadful”: A hushed good-night prayer as an intro to infernal horrors. As I listen to “lainnereP”, I hear a certain metallic atmosphere that has crossed my musical history at least twice. Many might take it a classical Industrial feature. But to me, it goes back to the very roots of this genre. It catches the air of 1980s New Wave in the way that it was reborn in early Nu Metal approximately 20 years later. Beyond this, the song is journey into your deepest worries and anxieties. Picking up the two-sides approach, “lainnereP” is the other side of meditation. All your thoughts and impressions, your experience and expectations, your emotions and unspoken words you pushed away to get into trance; JINJER magically channelled them into “lainnereP”! Good and bad. Dark and bright. Fearful and hopeful. Another soundtrack perhaps, but not as threatening as “Pit Of Consciousness”.

Straight and pure, JINJER play their songs without excessive synthesizers or massive orchestrations. Whatever effects they add to bass, drum, guitar and vocals come as a rare, and most precious spice accentuating discreetly – apart from “lainnereP”. And this only demonstrates that they follow no scheme besides perhaps that they have none. And still the result is an album full of songs catchy, groovy on the lighter side, aggressive, pitch dark and complex on the heavier side. Their secret recipe of creating the essentially needed harmony for a good song from so different if not opposing elements worked yet again. There are no limits. Anything can work with metal in the JINJERiverse: Reggae. Chanson. Folklore. Jazz.

Music is a translation of emotions into soundscapes. Highly individual. Subjective. I do lack the arrogance to rate this. Anyway there is no need to narrow my message down to a few figures. But I do have a bottom line: “Macro” is a master piece that takes all your consciousness to explore it and all your guts to let it touch you. If you do, you are going to enter a soul-crushing world of sounds that resemble the complexity of life itself from infernal depths to brightest easiness.

By the way, JINJER are touring North America these days and will come to shatter European stages on a widely sold-out tour very soon! 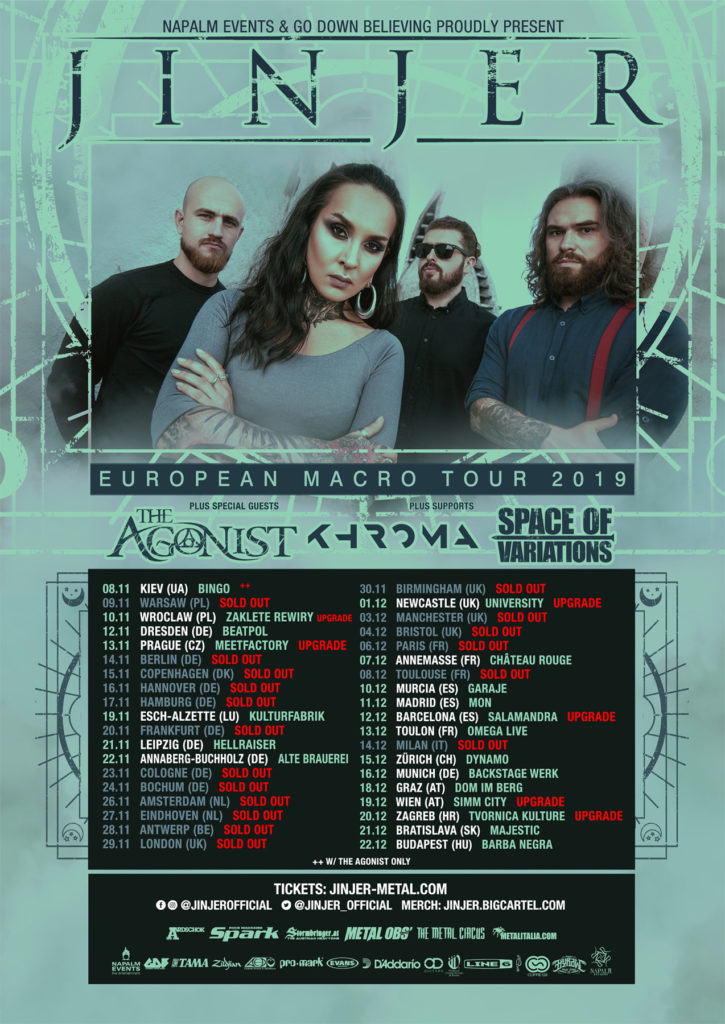