The Tuska open air festival is celebrating its 20th birthday this summer, so this might be a good opportunity to look into its history. This first festival was an indoor-winter thing. And whom do we find among those pioneers of the line up? Trio Niskalaukaus, Barathum and Impaled Nazarene, who will be playing this time, too. Amazing! Once more the metal community seems to keep its members young at heart and young enough to rock a festival stage in the first days as much as on its 20th anniversary. Yeah!

Many names have been loyal appearances on the Tuska stage, such as the three bands I mentioned and yet many others more. Some of these, such as Amorphis, Impaled Nazarene, 69 Eyes or Nightwhish are well known beyond Finland. Others have been pillars of the Finnish metal scence and yet remained mostly unknown to us abroad. One of those bands is Timo Rautiainen & Trio Niskalaukaus, who released their first EP already, back in 1997! Six full-length, one compilation and bunch of singles followed.

Timo Rautiainen is a musician I came across some years ago visiting another festival. And seeing Mr Rautiainen on stage was kind of a dejá vu. Look, Finland is a small country – in their self-perception even more than in our external perception. And as diverse as the metal community in Finland is you always meet twice – at least. So my story started back 2010, in particular with the tour start of a very traditional yet not extremely popular Finnish metal band. I met the musicians after show and asked for autographs to get a conversation started. Funny enough their guitarist was, well is very talkative. And I mean, really very talkative! It was my first time in Finland and my first contact with a Finnish musician. I met other Finns before. But most of the Finnish athletes of Nordic sports I had met before were remarkably less talkative and thereby pretty much meeting my expectations as raised by corresponding stereotype. Well, this guitarist is different. He spoke to another fan for quite some time and than changed talking to me – without even thinking of a break – and ignoring my 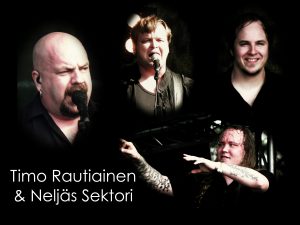 desperate approaches to let him notice my severe lack in Finnish language skills. After some more minutes, I spoke up a bit – in English, and he finally understood, being immediately touched by meeting fans coming from abroad to see this gig. … Well not really but still somehow we kind of kept in touch by FB. The point is that I noticed some names among his FB contacts that appeared more often than others. Otherwise than being confronted with those names again and again, I had certainly not been able to remember them, as I am really lousy in remembering names at all. But one of them, I am sure, was Timo Rautiainen. I never cared much who his contacts were or what their profession was. But then, it was two or three years later, I came to this festival in the guitarist’s hometown. He was around, of course. We had met due to another band he had started by then. He was talkative as before, perhaps not explicitly pleasing his wife, who was waiting next to him, by telling us all these really interesting stories in so much detail. And he spoke of so many bands we were to see that weekend. Anyway on the line up I read this name: Timo Rautiainen & Neljäs Sektori. Really, I wondered? And really: on a very sunny and particularly warm afternoon, I found my company and me in front of the stage – by the way: next to us were the members of another in Finland very well-known band, Viikate – making sure we (all) had a good view to the stage on which the face from that profile image appeared.