Returning to the Class Reunion – The Dark River Festival 2019

Reporting from the Dark River Festival (DRF) 2018 had become a very intimate, inspiring and moving matter. The crew’s welcome, attention and even care for my concerns was touching. No need to mention that the line-up, crowd and course of events was no less than great.

In a year in within that I am forced to focus on nothing but my most fragile health, it was one of the brightest moments when I learned that I would actually able to report from this very festival again! So here we go again, and return to the Dark River Festival. 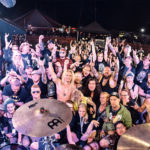 „The kymiest“, the crew promotes its festival. Kymi means dark and the river running along near the festival area is the Kymijoki. It waters into the Baltic Sea near Kotka and provides the name for the county and area likewise: Kymi Valley or in Finnish Kymenlaakso.

The darkest festival came to meet one of the heat peaks of the all-time high dry and hot summer 2018 – all over Europe. And I leaned about its secret magic – although it took a little moment to comprehend the deeper meaning of the darkest ritual performed rather at the very end of the festival. But then, when at the next morning a taxi brought me to the topmost lonely and unlikely railway station I have ever been at (and I have been travelling a lot!) it began to rain! I had nearly forgotten about the option of water simply falling from the sky. I had neither a rain cape, nor an umbrella, nor could I find any shelter, of course. And instead of a train on the rails soon a bus approached trafficking on the route to Kouvula where I had to change anyways. 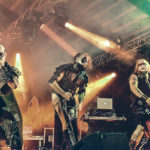 Oh, you riddle what this darkest ritual would have been like? Well, how can I begin or tell you without scaring the more sensitive souls among my appreciated readers? I can assure you that my dear Mum, an elderly lady of best upbringing, would have been deeply ashamed and had run most likely despite her rolling walker would hardly support an adequate speed on the bumpy and grassy in-field (literally). And thinking it over again, I heard a story lately (about her sophisticated ladies‘ afternoon coffee club back in my childhood days) which comes with quite an opposite taste and turns the odds as well as perhaps the direction of her run …

Um, ok. Back to the details of the performance – and be sure, there were a lot more details to be seen and proudly presented than I had expected or wished to see, at least on stage of a metal festival. In a performance of the musical Hair expectations are different, of course. I am detouring again. Sorry.

After this fulminant final of the DRF 2018 and a line-up that pulled a crowd lager than ever before, meeting this level in 2019 again has become a remarkable challenge. I remember Henri Eerola telling me happy as can be they knew about the recipe to achieve this now. Looking at the recent line-up I am certain it can work out. 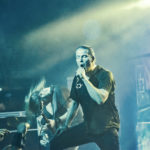 There are remarkably big fish like Ensiferum and the intermediate Iron Maiden frontman Blaze Bailey or the Iced Earth bass player Luke Appleton, and of course, Omnium Gatherum who are based in Kotka and have always been part of the DRF in one way or another. Another local appearance will be the masters of ‚kymiest‘ doom, Marianas Rest. From Helsinki the speed junkies of Brymir will play and Frosttide deliver some pagan and folk spirit from Jyväskylä. Find the complete line-up here. There will be way more cool music on stage! 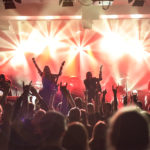 Personally, I am very curious whether the Finish big fish on Friday will pull a crowd either exceeding that of the international big sellers on Saturday or even exceed the magic four-digits number of Friday last year!

A Final Thought, A Personal One

As amazing as the bands coming to play are, most of all I am looking forward to experience the unique team spirit which is beyond words and so honestly heart-warming atmosphere again. The reason I considered coming to DRF 2018 in the first place was to finally see Kaunis Kuolematon play. What I experienced was unforgettable and I hope to find it again also a bit of distraction from my personal fight.

Text and photos by Ms Cesar Little, thanks to Raisa Krogerus for support.