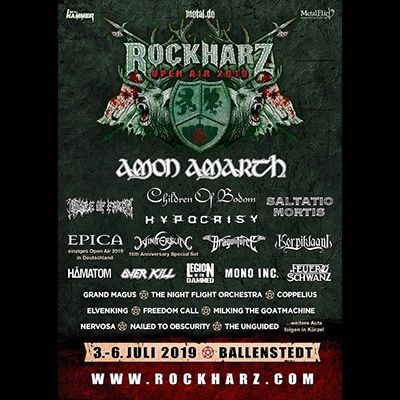 Rockharz Festival – or is it Rock Harz Open Air?

A re-/preview by Cat Maverick and Friend X

There are a lot of festivals in summer. Some are rainy. Some are sunny. Some are hot and dry, some are cold and wet. Some are located somewhere in a kind of desert-like steppe, in a park, on a racetrack, a muddy meadow and so on. Some are located in the middle of nowhere, some in a big city, nearby small towns, little villages, next to airfields and so on. However, there is only one festival embedded in such a wonderful, picturesque landscape as the Rockharz Festival in early July. But is this why thousands of metalheads make a pilgrimage into the German hinterland? Some festivals focus on mainstream rock or metal music, some on the death progressive or underground metal scene and some just want to be pure fun. Okay, we’re metalheads, so forget about fun. We have to protect our evil reputation, don’t we?
Nevertheless, there is only one festival with such a high quality and well-chosen mixture of bands and  genres as the Rockharz Festival.

The festival is located nearby the town of Ballenstedt in the Harz region of Sachsen-Anhalt/Germany. Where? Yes, that is remote – at least by German standards! And to be more accurate, it is between the airfield of the small airport of Asmussted and the „Teufelsmauer“ (which translates as the ‚Devil’s Wall‘), a majestic and characteristic rock formation. If nothing else, the Teufelsmauer is unique and makes a feature of Rock Harz! 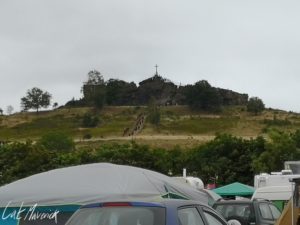 When you are on your journey to the venue, you might pass such well known mysterious places as the “Brocken” (highest summit of the Harz) and the “Hexentanzplatz” (come on Beltaine and find thousands of witches honoring the tradition of the witches summit here in early days), or the Kyffhäuser Monument, the said tomb of medieval German Emperor Friedrich Barbarossa – a story comparable with the legend of King Arthur in Dark Ages‘ England.
As long as you don’t fly in with your private Learjet you depend on minor countryside roads and that means trying your patience. And if you went to the festival in 2019 you might have been stuck in a particularly big traffic jam – no matter from which direction you approached the event site – caused by some road constructions at the worst time possible for us dedicated metalheads. Not to mention that there is (of course) no gas station, grocery shop or beer delivery service around as remote as the location is, once you passed Ballenstedt and its supermarkets. You’re simply stuck in the dry heat of the hinterlands. Nevertheless and though a lot of time passed by, the traffic jam was peaceful, actually even helped in making new friends, discussing the bands or sharing beverages (c’mon, that’s true comradeship). And then the traffic jam knows no gods, no masters. It has no privileges for anyone so that even some of the organizers got stuck in the traffic jam. They understood and worked hard to help resolve the situation (no, they did not sell beer & pizza lacking an oven and a fridge!) – or at least, as far as it was in their hands, even though the mess was like a Gordian knot. Where is Alexander the Great when you need him most?
Exactly, last in the row of the traffic jam to say so!

Anyways, once beyond the access control, everything becomes easy. Either you have a reserved campground (make use of this, really, it usually sells out fast), or you find it yourself (or else you’ll perhaps end up a days-journey off of the infield once your lost in the campsite and don’t find your tent anymore). The stewards are not interfering too much though, besides taking care, that no space is wasted and helping to direct into one or the other direction.
Setting – always a perfect opportunity to meet your neighbors – up your tents or parking your camper is easy, the ground is good, neither too soft, nor dried out – an advantage of the landscape. Make sure the next toilet (!) is neither too far away nor too close!
Keeping a little space for your latecomers (remember the traffic jam in 2019) is tricky but not impossible, of course being nice, friendly and understanding with the stewards is helpful.

Before speaking of the actual festival part, meaning the music, and due to the challenges of the journey, we need to focus on the most important topic first: food and drinks! The front part of the infield already opens up on Tuesday afternoon (coming very early might spare you the traffic dilemma and you still don’t have to starve). At least pay a short visit to the inglorious ‘Mutantenstadl’ which offers almost everything plus a lot of good fun. 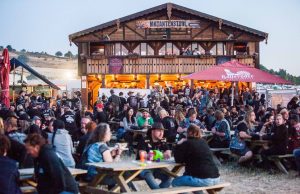 Besides, the name Mutantenstadl is a German pun of words combining the word Mutant (“mutant”) and “Musikantenstadl” (an event with lots of German folk music). Rest assured though, there will be no German folk or at least not on the stages. If there is no accordion or tuba music here and also no strange songs being sung, why else would I want to go there, you might ask? Well, this place is something very unique about the Rockharz. It’s kind of similar to a German beer garden. However, the organizer puts a lot of dedication into the design and build of it every year. There is usually a large house with a balcony on the first floor, a lot of seating space with parasols protecting from the sun as well as from occasional rain and some artfully decorated figurines. 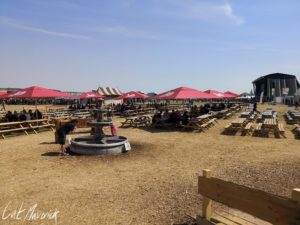 In 2019 there were, for example, a fountain and a bench, both designed to match the mutant topic and giving this specialty of the Rockharz its unique charm. There are some of the other stalls with food and beverages, too, of course, and in general, the range of quality food besides the usual fast food is good, no matter if vegan, veggie or meat, you find something for everyone for a fair, not overly expensive price. The beverages are of course dominated by only one brewery – true, it could be better stuff but that’s a general festival issue, isn’t it? And it still offers a variety of beers – besides the usual range of soft drinks.
Additionally, there is one wine stall, some cocktail stalls.

Now that our stamina for extensive banging and moshing is granted, we can shift to the program. Being early, rewards once again. Unfortunately, the running order for 2020  is still to be published. So let’s explore last year’s lineup a little to get a bit of an understanding of the typical Rockharz feeling.The bands start playing from Wednesday evening on. In 2019, we even saw some big fishes as Combichrist, J.B.O. or U.D.O. as the “opening acts”.
The program is a bit of everything. Thursday came with rather unknown but all the more precious jewels as Blood Red Hourglass; with the brasilian Thrash metal queens Nervosa, or institutions such as Cradle of Filth, Vancanto, Amon Amarth or Lordi.
Friday welcomed Dimmu Borgir, Dragonforce, Soilwork, Saltatio Mortis and many more.
The final Saturday brought Mono Inc., Burning Bitches, Epica, Children of Bodom together with another 13 well-mixed bands.

Just from this selection of names, one understands quality over quantity. The mix of genres is not polarizing but brings fans of different genres together.
The pretty cool thing is, it is generally easy to watch all or at least most of the bands. The stage well-positioned in short walking distance from another as the infield is broader than deep. The stage actually is a double stage so you can watch one band from the side while you are waiting for the next in front of their stage. There are no overlaps, so you won’t miss a band if you don’t want to! Keep in mind, that sometimes, it is also interesting to watch the next band doing their soundcheck, if it’s not done by their crew.
No big screens are blocking the view from any position, and honestly, you don’t need them, as distances are short. 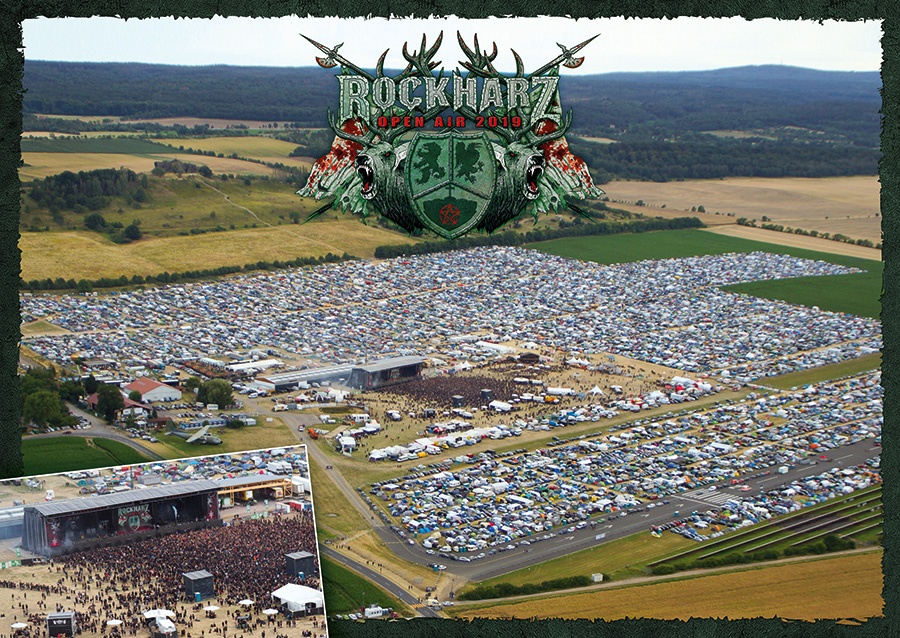 There is a spot each Rockharz visitor has to go to. Some climb up there at night to find a bit of silence. Others take a couple of beers to enjoy sunrise or sunset. And even musicians were spotted to visit the Devil’s Wall to have their true Rockharz experience. The way up is steep, very steep and maybe exhausting, even though it might just be a few 100 meters up, the party the night before certainly pays its toll here… Will we have to go there on a rainy morning or in the burning midday sun in 2020? Never mind. No Rockharz without it!

If you’ve not been to the top of the Devil’s Wall yet, did you really ever truly go to the Rockharz?

Yes, there is merch. Naturally. And yes, there is a lot! There are stalls with the official merch and naturally a bit of everything else. The festival offers some special editions of merch, so queuing up early is highly recommended if you want to get one of these gems in your size! Besides the Rockharz-related merch, you can usually buy shirts and other stuff of today’s bands and sometimes also of the previous day’s lineup. So perhaps consider stopping by there for a look more than once. It’s worth it!

Every festival ends and so does the Rockharz. Yes. Sad, but true. So apart from putting your tents together, loading your car and driving back home, there is no agenda. But is there really none? Ha-ha, there is, and it actually helps to prevent the post-Rock-Harz-blues as it ensures you confront yourself properly with the end by sort of preparing for next year already. “Putting your bin together and cleaning up your site to leave it as clean as you found it, no matter how much rubbish you put everywhere”. I’ve never seen cleaner campsites than the Rockharz after the last car left, even cleaner as the so-called “Green Campings” of so many other festivals. It is a good tradition to collect your trash and bring it to the big containers. There, as a little ‘thank you’, you receive a high-quality printed A1 aerial photo of this year’s campsite, taken the day before which makes for an excellent memorabilia!

Well, since spring might knock on the doors soon, it is time to think about the festivals this year. If you decide on going to the Rockharz 2020 on1. – 3. July, hurry up. It will certainly sell out its 18,000 tickets soon. Soon and as usual.

The latest news from the festival management is, that – despite the current health situation – they expect Rockharz 2020 to happen as planned, supposing that by then, the situation will be back to (mostly) normal. 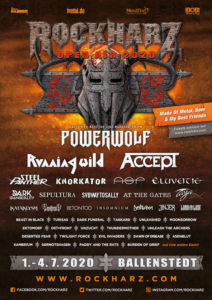