Some time before I heard of Raskasta Joulua for the first time, I ran into some amazing 80’s cover songs from a band called the Northern Kings. One thing was for sure: these guys had amazing voices but also great humor. Check out yourself: Northern Kings, ‚I Should Be So Lucky‘

So speaking with Erkka Korhonen on the Raskasta Joulua tours and albums, naturally I was curious to learn how both projects are related.

I would like to know if the beginning of Raskasta Joulua was also the moment in which the Northern Kings were born. „Ah, the Northern Kings thing started brewing in 2006 when we were doing the second album. We signed to Warner at that point and Teräsbetoni was already signed to them and they already produced their first album. And they had a major, major hit with that one. And then a A&R guy who saw us on the small tour we did in 2005, and he was the one who signed us and then, when we started working on the album, he came to me with his idea. And that he had been thinking about this. The working title was ‚Held Evil‘. I would have loved to go with this one“, Erkka says smiling brightly. „It would have been fantastic. But the bigger bosses didn’t like it, if I remember it correctly. It started from there. It’s basically a spin off. So in 2007, we started planning. Planning that right after the tour we had a meeting and we had to come up with some sort of an idea. Not just let’s do cover songs. What kind of cover songs, ok? ‚Let’s go to 80’s pop. And do mostly that.‘ And that was the thing where we started. And it was actually nice.

The first album sold gold in Finland. It was a bit difficult to create anything outside Finland because Marco was very busy at that time with Nightwish. They did release „Dark Passion Play“ just that year. He was actually on release gig before Northern Kings. We were offered to do a really, really big promotional show in Kluben in Stockholm, televised. We were not able to do this because Marco was on tour. Everybody understood this. We were like ‚ok, damn‘. You know, we knew this. We knew it was more possible to happen this way than the other way round. But anyway then some big changes happened at Warner. Basically the entire A&R and management staff changed.“

„Ok…“ – „And the attitude towards us changed totally. We were not signed by these new people, so we were not important. We were not triple or quatro platinum sellers so we were not important. The A&R basically had to sell the project again to these guys. It didn’t matter to them that we had a gold album. It was like again we needed to go to a meeting and explain what it is all about. We were like ‚What the fuck is happening?‘ You know?! And they just let the album die.

We did „Rethroned“ which in my opinion is a more coherent, better album than the first one. But they just let it die. Probably these days now that the barrierer is lower it would’ve sold gold. I think that I saw we sold around 12,000 or so in Finland. But they just let it fucking die.“ Another chapter in the book of rather unpleasant label stories told here! 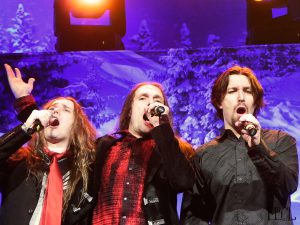 „But there are really great songs on it!“ I point out. „Oh yah. And we were supposed to have a second single, a video and all of these things but nothing happened.“ – „Really, really shitty“, I chide. „It’s the management that’s still there.“And they don’t have on single whack act. They even made Jarkko Ahola this Helmut Lotti of Finland. You can print that!“ he points out. And I stare at him. I neede to hear the recording before I understood the name. It was clear, however, that the actual comparision wasn’t a compliment. And how on earth does a Finn know about Helmut Lotti? I refuse to think on this! “ You know entertainment albums“, Erkka adds.

„And he is selling so good actually.“ – „He is selling good“, he explains, „I am actually happy for him that he is doing well. I don’t want people to get me wrong but I wouldn’t be surprised if there was something ticking in his head about: Is this really what I want to do? Would I rather be doing something else? Very important question.“ As much as I prase diversity there is an important point: being true to yourself and I am afraid that is the point Erkka hints to. But this moment I think of yet another dimension of the issue:

„Definitely“, I agree, „but sometimes as it happens you just go on with your projects and forget totally to take a step back, look back what happened and wonder whether this is really what you want.“ – „Yeah“ „You just feel like caged in a hamster wheel and you think you can’t get out of it. You feel you don’t have the time to get out of this.“ – „Yeah.“ – „When actually it was the most important thing you should to is to step out and think over what you’re doing in this very moment. It happens too often.“ – „Yeah. I have to say that as a company Warner hasn’t been too helpful towards us. Towards Raskasta Joulua because in the end Jarkko wouldn’t be a solo artist for them without Raskasta Joulua.“ – „Most likely, yeah.“ – „Because, you know it’s long story. But Jarkko was signed on a TV performance into which they choose Raskasta Joulua singers. And it was aired on a Christmas Eve. So we have a very important role in him being that one artist. So I am not really happy that they’ve chosen to turn their back on us on a couple of things.“All this adds another chapter to the book of unpleasant label stories. 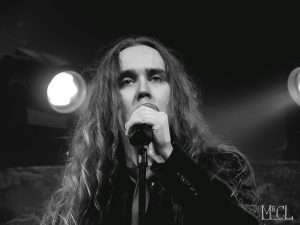 „Will he return to the live line up? I mean he still appears on the records and promotional photos?“ – „Yeah, he is on the records. And it’s always a matter of how the dates fit.“ – „Logistic matters?“ – „Dates and logistics. His own tour. He usually gets those dates not really early, which is kind of funny. When he does the church tour it’s Warner music live. And they usually keep the dates for quite a long time“ – „Ok?!“ – „Then it’s kind of difficult to do the bookings so we only have like questions marks here and there. Maybe this date. Maybe that one. Let’s see. And so we have to usually count on him rather than that he’d be there.“

„What a pity because I had actually twice the pleasure the experience the Northern Kings line up live: as Northern Kings on a festival in Kemi and in Turku with Raskasta Joulua. And it was so amazing. The chemistry on stage was so intense and their constant kind of challenge to perform even better, like a friendly competition.“ – „The guys are good friends with each other. And they push each other“ – „Those two gig range among my personal top concert experiences right next to Iron Maiden.“ – „Thank you and I imagine that the guys would be really proud of that comment. And thankful as well.“ – „So from my perspective it would be great for the audience to have more of this experience. I mean I have seen a couple of the other singers in other shows (of their bands). And they do perform passionately and can also set the audience on fire. They’re really, really amazing. But the chemistry among those four make just the difference.“ – „Actually I can’t tell you more about this but there will be some Northern Kings activity this year.“ – „That will be great.“ – „Absolutely. We’re doing one thing. I just can’t tell you what it is. I will see then.“

Once more I am confronted unexpectedly with negative sides of the show biz. I admit in the actual interview I did not understand the name which whom Erkka compared J Ahola. But his voice made clear: this is no compliment. Doing the script later, my first thought was: how on earth does a metal head Finn know about Helmut Lotti? Then I thought what might have happened to convince Jarkko to follow this path? And this is not about a lack in appreciation of diversity! It is a question of the balance between living the teenage dream of making your living from music and authencity.

I met Jarkko after each gig I attended with him being on stage performing. It always seemed really important to him to be in touch – literally often enough – with the audience. He would pateintly sign autographs, take selfies with the fans, hug and even pop up behind fans who did not expecte him to come initiating a conversation with them. I find it difficult to make sense of this and him being Helmut Lotti of Finland.

Read next: the musicians of Raskasta Joulua. In the meantime check them out here: Tony Kakko & Elize Ryd

Have you considered that maybe there is more than just that one side to this Jarkko story? And that maybe the best person to answer questions about Jarkko Ahola’s career and Jarkko Ahola’s choices and what Jarkko Ahola should or should not want to do is Jarkko Ahola himself? Perhaps, to be fair, it would even be a good idea to ask Ahola for an interview to get more than just a one-sided version of Ahola’s career?
One thing I’ve never heard Ahola do, though, is speak badly about his current or former band mates or friends.

Thank you for your words! I sent Jarkko my questions months ago and have been waiting for his reply ever since. But he is very busy. And this is no excuse. I know he really is. I am very much looking forward meeting perhaps next year in person to discuss just this. I have followed his career for a long time and I am very curious myself to learn about his perspective. The diversity of his doing is amazing. No one spoke bad of him or his person, by the way. But the music business requires taking tough choices. I… Číst vice »

Totally agree with S. I have to admit when I read this interview I was pretty amazed at the negativity of the comments about Jarkko Ahola. Very disappointed to read such words from Erkka. I has actually made me question whether I would like to attend any of the RJ gigs. I also feel J. Ahola should be interviewed to get his side of the story as I feel Jarkko has always shown integrity and authenticity. What gives Erkka the authority to judge Jarkko’s authenticity ? I also never ever have Ahola speak badly of current or former band mates… Číst vice »