During Nummirock 2017, VORNA invited me to meet them in their camp for a long and intensive interview (>>link). We spoke of their band dynamics, personalities that make the band; how they come up with new music; the role of their ‘seventh band member’ (actually their manager) and many things more. Recently we spoke again – little before their Metal Crane Festival show in the legendary Nosturi and met in a cozy venue office, the musicians snugly lying on comfy couches in an easy-going mood … 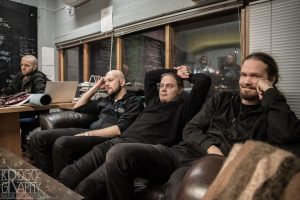 Vorna during our interview: Mikael, Henri, Niilo and Arttu

VORNA only lately finished their work on album No 3 the release date of which remains to be set, still. Anyway quite some time has passed while life has moved one. Back in summer 2017, they pointed out that VORNA as a band can work only in this very line up. It was quite some challenge back then due to living in several places and being in need to balance job and band interests. How about it now? I guess it hasn’t become any easier? – No it hasn’t, they all agree. But they have made it so far, and they are apparently very determined to go on. But how could a longer tour work with their day jobs and stuff? Vesa Salovaara (vocals) replies in a smile that reveals quite some experience in set-up situation: “Well, initially it’s never possible, but”, they all laugh out loudly. Vesa tries again, “but”, they are laughing again and so Mikael Vanninen (drums) fills in: “Everything’s gotta be arranged.” Vesa grabs the baton again: “Well, if that’s the situation we may have a solution” and then “we all figure something out”, sums Mikael up triggering some agreeing mumbles from his otherwise silent bandmates. 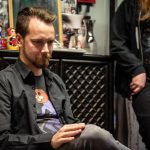 Saku, explaining how he ‚plants‘ keyboards on the songs.

We chew on how the songs were written and composed this time, how lyrics and instrumental parts find together and which role creation and live shows have. What has changed since the last album? “Iiro (Laitinen, the manager) has a dog!” I learn and we all laugh out loudly. “The basis of the songwriting was still the same”, Vesa tells me. Composing, arranging, writing lyrics or in general coming up with new music is making use of your creative energy to form something new and express yourself. You translate a share of your experience and also imaginative power into a piece of music. “Even though writing the lyrics was much more stressful than ever before I liked writing the lyrics much more than ever before”, Vesa who does all the lyrics and vocal arrangements more or less on his own explains. Saku Myyryläinen (keyboards) complements that it is his to add the keyboard passages: “For this album, I did the keys – like most of them – without those guys knowing what I was doing, and then I just gave it to them for listening.” We laugh once more. Vesa provides some more details: They had recorded the basic structures of the songs already, like guitars, bass and drums before Saku “planted those keyboards” as he puts it on top of it. Finally, Mikael and Arttu (Järvisalo, guitars) mixed the whole set up, provided the final shape of the songs according to the band’s common ground for each song. Interestingly, in order to make use of good lyrics, Vesa would rather write a new song then bend the words to make them fit to a tune that does not feel right with the particular words.

The Balance of Playing and Creating

Playing on stage means you have the opportunity to present your music. People pay to see you play. They will observe you and listen to your music. Many will take photos, perhaps even videos of your show. Friends and family might come, too. Media might publish photos and reviews of one kind or another. Most of all however, everybody out there will experience your music. Your work. Your emotions transcribed into notes and arrangements. Moreover, people will see what you feel when you play on stage. Isn’t that a damn good reason to be nervous? Perhaps you love this little thrill? And thus, we’re getting back to the question of priorities. What tips the scale? Creating or playing? “I don’t really compose. So playing live in my case”, Henri Lammintausta (guitars) says immediately. Arttu just as quickly replies that for him writing music has always been the more important part. The others take their time to make up their minds which is not easy after all. I hear from Mikael that playing shows is quick gratification compared to the long process of making a new song and then adjusting it to the opinions of the bandmates before finally producing it. Niilo Könönen (bass) has been avoiding to return my look. He is staring to the floor, but looks up as one of his bandmates speaks. I can nearly see how heavily his mind is trying to name his priority. Several times it seems, he wants to say something but he can’t.

The band still comes its original line up. None of them can imagine VORNA to work in any other than exactly this. And hei, these are the best bandmates you can have which is the point, Saku’s point! It’s vital in playing as much as creating, both are important to him, too. But doing all that in this very line up is the actual point to him! And the others agree.

These guys have been friends for so many years and more than anything that is what they want VORNA to be. Niilo has still not made up his mind. It doesn’t matter actually. Sometimes this is not a matter of priority but two complementary dimensions of making music that can only work together, right Niilo?

VORNA spend a whole weekend together. Their lives haven’t offered many opportunities of that sort lately. Playing a show at home is one thing but spending a whole weekend on sort of a mini tour with the friends has its own charms and importance. The guys established VORNA when they were still at school. Regular rehearsals were common and turned them into a bunch of close friends that is if they weren’t already. But once graduated from high school lives change and jobs demand time and effort, take energy and perhaps require to move away. Sticking to band commitments is not getting easier while pursuing a day job career that makes your living. So it seems most of all that the actual highlight of the weekend for VORNA neither is the Metal Crane Festival gig in Helsinki nor the JLK Festival gig in Jyväskylä but spending quality time with friends – like in the old days.  And as a special add-on bonus they can play two shows! 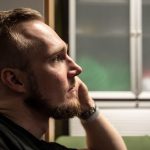 Vesa, vocalist, would love to play the new songs already.

Then of course there still the challenge, well rather a temptation, I should say. Playing shows right after they finished working on the new album which means they played the new material what felt like a thousand times, they hit the stage to play different songs. Older material. Isn’t that weird? “We have something new!” I hear immediately. “It would be great to play the new stuff”, Vesa admits. But then they don’t want to spoil the release. Arttu explains that certainly there is a temptation to play new material and see the crowd’s reaction on it. But then they decided to pick some older songs they haven’t played in a while which makes them experience the setlist sort of new and definitely different. And Vesa adds: “Actually we haven’t rehearsed the new album. Not even one time! So there is eventually many surprises ahead when we actually try to play those songs.” We laugh.

You and me, we have to wait for the new album for a while, still. I am very curious for it. For their current album, “Ei Valo Minua Seuraa”, released in December 2015, the band received amazing reviews and feedback already. Good omen?! So let’s wait and see.

All photos by Raisa Krogerus! Thank you very much!!!