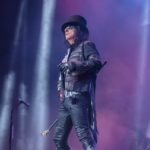 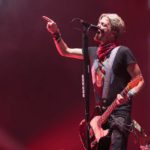 Alice Cooper and his phenomenal band opened the German leg of ‚Ol Black Eyes Is Back‚ world tour in Mannheim (SAP Arena) supported by the Black Stone Cherry (in the European tour leg, but Halestorm” in the US) on September 11th. What’s the secret of the grandmaster of shock rock’s shows while his career exceeds the life span of most bands if not that of their musicians, too by now? The EP „Breadcrumps“ and the tour make his 50-years anniversary package. Whatever, you can always be sure about two facts: Alice Cooper’s live band is a superb selection of excellent and very skilled musicians, and his support bands are the finest and best you can get.

Not only does Mannheim have a pretty 18th century chateau near by the main railway station but it is also the hometown of the well-known SAP-Arena nearby the motorway A6. It is a multifunctional arena built beginning of this century. Sadly, the venue was barely well-filled and far away from sold out. What a shame, the arena could have hosted them all even if each had brought another friend along!

At 20:00 h sharp, Black Stone Cherry started a furious journey through their Southern Rock repertoire. They played about 45 minutes and although the audience was a bit reserved at the beginning – which might come from the average age – it warmed up during the set so they got their well-deserved dacapos and applause.

Apropos audience, this was an interesting mixture of all ages, mothers, fathers, sons, daughters, grandparents with their grandchildren united to watch and listen to the one and only Alice Cooper, maybe the last surviving true entertainer of Rock ‘n’ Roll business. 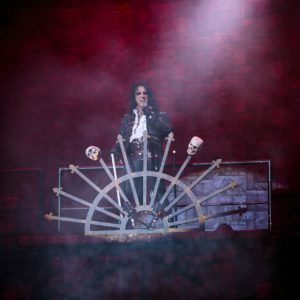 So after a break of 30 minutes, the waiting was over and the curtains fell down. Mr. Cooper – supported by Chuck Garric (bass), Ryan Roxie (guitar), Nita Strauss (guitar), Tommy Henriksen (guitar) and Glen Sobel (drums) – fed his „Frankenstein“ because he is „No More Mr. Nice Guy“ and had only a short rest in his „Bed Of Nails“ before the show continued with one gimmick after the other. 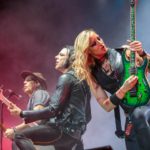 Each song was not only played on the musician’s instruments. No, it was also role-played and performed by each one of them, with Alice Cooper himself being in the frontline, giving each of his musicians the well-deserved space. May it be ‚Her Majesty, the Shredding-Queen‘ Nita Strauss from LA, or Glen Sobel with a furious and thunderstorm-like drum solo or any of the other string wielders. They all got their spotlight. This might be one of most important bricks in Alice Cooper’s wall of on-going success. His band is way more than only a selection of highly proficient instrumentalists. Each of them perfectly fits into the band as one unit on stage and as performers with musical and show talent. Most of all, Mr Cooper himself proves respect for this band’s performance. He shares the space on stage in a manner his band can to fill their roles in the theatric show at their best.

Anyway, the audience knew most of the songs and sang along, only more or less hitting the tone but that’s not the point, right? What counts, was the fun and entertainment. Of course, Alice Cooper again was „Eighteen“ and so were all the audience out of the sudden before they had to drink some „Poison“ and „Steven Escaped“ with the „Teenage Frankenstein„.

There were many more songs, all well-known! But after all came „Under The Wheel„, the  ‚School was Out‚ because „We Don’t Need No Education“ intermezzo but got an introduction of the band members which was the grand final the show after 90 minutes. 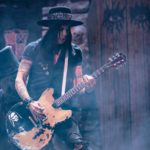 This concluding presentation of the musicians on stage – who didn’t know them anyway? – turned out to be the only utterance. No superfluous talk to lengthen the show and play less songs! Thus music and performance ruled! Still you had the notion of a constant interaction between stage and audience – far from being reduced to ‚sit and watching‘ like a boring musical or opera.

So what is the secret behind the performer Alice Cooper even after 50 years? As said above, one secret is the live band. Another one is the carefully designed theatrical setting; each song is a small a story of itself. You can have a nurse, a maniac, a guillotine, a Frankenstein’s monster, a giant baby, a medieval fortress and in between Master Alice pulling out just one more gimmick once you think he is done with it. Therefore, whenever you think ‚warhorses on stage‘, such as Rammstein or now on their End-Of-The-Road KISS are the true masters of shock rock and outstanding live shows, he, ‚grandfather‘ Alice Cooper, is  t h e i r dominating grandmaster! This being said, there was neither fireworks needed, nor flame throwers or burning guitars! Just performance, pure and honest, and a ‚Little-Shop-of-Horrors‘, Rock ‘n’ Roll theatre at its best – no more; no less. 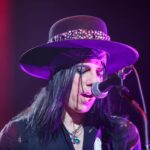 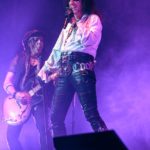 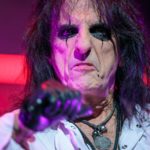 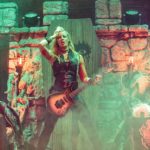 Let’s hope, we can see him many times to tour again! 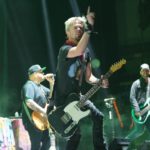 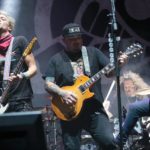 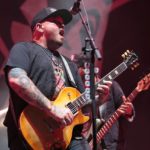 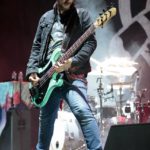