The Universal Satan greets From Hell With Love

Or A Gig Report: Beast in Black supported by Turmion Katilöt

Winter 2019. Carnival. Downtown Frankfurt turned into a huge party area. Little off the city center in the legendary Batschkapp two Finnish bands are scheduled to play their shows. Beast in Black supported by Turmion Katilöt. It is the first headlining tour for Beast in Black promoting their second album “From Hell With Love”. This tour is a risky endeavour. Two bands only and none of which has much of reputation in continental Europe. Beast in Black has toured on German stages for the first time only 14 months ago supporting Beyond the Black. Turmion Katilöt has been very popular in Finland for many years yet not been playing much abroad. And still as the show day is approaching the bands promote some venues to be sold out already! How can that be? Perhaps because both bands are exquisite show acts playing music that can pull a crowd even beyond the metal scene.

The venue is surprisingly well filled considering the facts that it is a Monday night and that the ongoing Carnival might pull any crowd elsewhere. Making my way to the bar and from there towards stage and pit I note some more Turmion-Katilöt shirts and a flood of Beast-in-Black merch in the crowd. 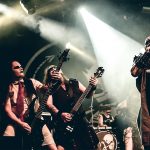 Let’s travel back in time. It was a warm summer day when a friend and I came to attend the Finnish Kuopio Rock Cock festival in July 2012 for the first time. It was a relaxed atmosphere, the large, three-stages venue filled with families, metalheads and whoever else was in for a sunny weekend with the shows of the crème de la crème of the Finnish music scene. There were numerous bands we were certain not see at home anytime soon, and even more bands, we had never heard of before. One of them was Turmion Katilöt. And their show was so good that one year later it was one of the main pros for us to come and see the festival again! 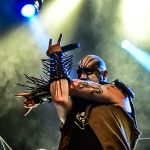 Back to winter 2019 –  The atmosphere is relaxed. A huge, encircled devil skeleton foetus looks at us from behind the stage – the logo of Turmion Katilöt. As Shag-U and Mc Raaka Pee and their instruments’ wielding band mates enter the stage, the crowd exceeds my hopes already. Their looks are grotesque, perhaps creepy even: Faces covered with scary black-and-white makeup, and dressed in ragged and queer costumes. RunQ hammers some very catchy synthesizer accords into our ears! “Grand Ball” – only a few seconds and I recall the song that I have never forgotten since I heard it in Kuopio. Grand opening of a grand festivity. A perfect kick off. The show is just as explosive as this song. Like a whip the song makes the feet move – each of DQ’s hit on his kit is a whipping though the aggression grows more from the heavy riffs shredded on Bobby Undertaker’s guitar. 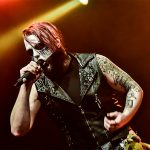 Back in late summer, Turmion Katilöt released their recent, 10th album: “Universal Satan”. The second song tonight, “Love Is Dead” from the recent album might answer the unasked question whether or not Turmion Katilöt and Beast in Black fit musically in one show? Both bands cherish the era of the rise of synthesizer sounds: The 1980’s and thus, no surprise, their synthesizer soundscapes just match perfectly. 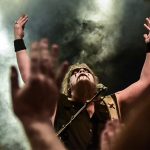 The show is purest fun and the crowd is under their spell as Turmion Katilöt make them explore their music biography with some more highlights. “Have you ever been to hell?” Mc Raaka Pee asks the crowd and “hell” echoes in creepy growls from his and Shag-U’s throats. It’s the intro to two songs from their legendary album: USCH! “Usch” and “Hades”. The intro of “Hades” might remind of an archaic computer game but the song takes you all the way down in a void full of voluminous synthesizer accords darkened by an overweight of guitar riffs leading into a dark, heavy and yet very catchy refrain.

A view over the crowd moves the corners of Master Bates’s lips upwards, revealing his satisfaction as he set the bass strings aside for a few seconds to capture the hell of a party on video. Like a conductor Shag-U directs the crowd. 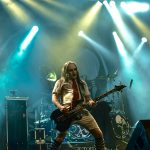 “Anything can happen”, Mc Raaka Pee once said to me describing their shows. They don’t plan anything. They seize the moment and celebrate a spooky feast on stage. Some more “Universal Satan” songs (like “Faster Than God” or “Sikiö”) keep the crowd sweating before two songs from Turmion Katilöt’s previous albums ends their sort of impro theatre-like, multi genre music show performed by kind of ghost-train figure-like looking guys. The crowd loved it.

Shag-U pops up at the merch for a brief chat and feedback. “Did they like the show?”, he asks me pointing to the crowd. He seems sceptical. True, compared to the atmosphere of a Turmion Katilöt show in a Finnish venue on Saturday night the crowd was some sort of reserved. Very much, to be honest. Hell breaks loose with Turmion Katilöt on stage at weekend night in Finland. But then it is Monday in the German capitol of banks and finances. Thus, hardly anyone is as drunk (if at all) as on a Saturday night in Helsinki or Kuopio. And still here in Frankfurt, so many have come tonight and still they banged, moshed and cheered captured by the metal disco vibes.

Beast in Black Ruling The Crowd 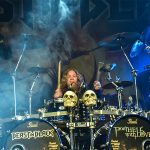 The crowd has grown even when the Beasts take over the stage. The band has toured continental Europe with Beyond The Black, Rhapsody Reunion and Nightwish since November 2017 and released their second album only one month ago: “From Hell With Love”.

When I met Anton Kabanen (guitar) for our first interview (July 2017) it took only a couple of seconds to notice that he knows exactly what is needed to lead his new band to great success and that he was capable to do so. 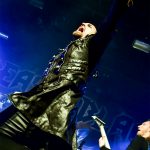 The Beast crawls on stage! Atte Palokangas (drums) is the first on enter the Beasts’ hunting ground and the crowd welcomes him enthusiastically. These Beasts need no cage, these Beasts in Black need impaled and illuminated skulls. When Mate Molnar (bass), Kasperi Heikkinen (guitar) and Anton appear, the cheers rise even more. But they go frantic when Yannis Papadopolous, the charismatic enchanter shows up. I admit that this was a very impressive welcome. Unbelievable that the band’ journey has just begun. 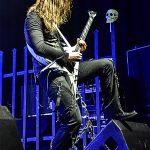 A new intro and a ferocious opening comes with songs “From Hell With Love”.  The setlist is a neat composition of the highlights of both albums woven to stout storyline. The Beasts dressed in Black can rely on their new material – no need dig out the dust covered songs from a chapter that was finished years ago (when Anton left Battle Beast). The Beasts hawk their prey, their crowd and in the well-known manner Anton unleashes the “Berrrrrserrrrrkerrrrrr”. The prey obeys as a choir chanting “Born Again”, “Beast in Black” and most of all: “Blind And Frozen”.

I have never had the slightest doubt that this band will rise. The crowd on this Monday night exceeded that of quite many bands I have attended in this venue in the past year – bands that have come a long way and can rely on a loyal and large fan base over here. And it is impressive to see at which breath-taking speed the Beasts have come to this point of success. 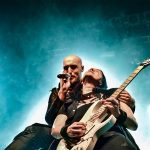 Taking my photos from the pit, I notice a teenaged girl with a pink unicorn in the first row. The catchy songs reach ears that otherwise might rather not attend metal gigs. When later I stand in the back the Beasts perform their ballad “Ghost In The Rain” I am thinking of the girl with the unicorn again. I get aware of the romantic expression in her eyes. It’s quite some time since I have seen teenagers blushing at the look of their idols on stage in the front row of metal show.

The setlist ends as it always has: “End of The World”. The crowd screams for more. They are enchanted. 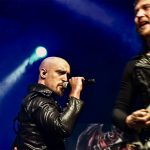 Beast in Black have worked extremely hard, focused and a hell lot to make this far in such a short time. Being amidst the cheering crowd I am glad to see: There are bands that can pull a crowd, fill a venue and make it to the point of economic success. They have toured continental Europe for the fourth time in little more than one year now, been to Japan and touring Finland several times, appeared in almost every rock/metal festival line up of Finland last summer and numerous international festivals as well. Their hard work is getting rewarded, I am happy to see. This crowd will come again, I am certain. And they will bring their friends, too.

Still I would like to see them slow down a bit. Just a little bit. Their speed and effort is murderous. The show is – absolutely no doubt about that – great, professional and entertaining! But perhaps it is a bit too much of that and not the same degree of burning hunger and passion of those I attended at the former tours. 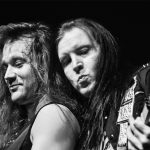 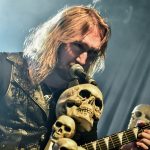 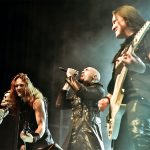 Certainly: Turmion Katilöt is one of those bands you will never forget once you experienced them live. Their shows qualify for a comparison with the old grand master of shock rock: Alice Cooper. I am most confident the Frankfurt crowd will agree.

Beast in Black is pulling crowds and delivering great shows providing thus a perfect concert experience. Their music is so catchy and their engagement on stage so capturing that I am certain to see them fill even bigger venues soon.

Both bands deliver shows at the highest levels and are worth each cent of the ticket charge, each minute of the show and each kilometre to the venue they play in. Experience how the Universal Satan send his greetings From Hell With Love! 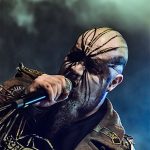 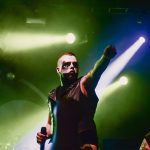 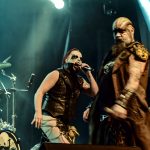