Who are the uncounted helping hands and thoughtful minds who enable our favourite musicians to play in the end? Or to record their next album? Have you ever noticed the one guy checking out each instrument and mike on stage before the show? Or have you ever spoken to the security guy at the gate to the pit? We have spoken to some of these ‘mercenaries’ of this invisible but essential army already and we will meet a lot more of them. Because in the end they are as important as the musicians themselves nowadays still no one takes notice of what they are doing. But we are changing that now!

So WTF is a booking agent and how do you manage a twin festival? I mean you cannot be in two cities at the same time, however, you should while running two festivals at the same weekend.

Iiro Laitinen gets us all the answers we need here. He is our multi-job man, in his mid-20s and working as booking agent at NEM Agency. He is also promoter of the twin festivals Metal Crane Festival (Nosturi, Helsinki) and JKL Festival (Lutakko, Jyväskylä), manager of Vorna, and owns Northern Solitude Entertainment. NEM agency (originally found in 1987) is one of Finlands leading independent booking agencies and live promoters based in Tampere (Finland) which have a wide range of Finnish (such as Barren Earth, Bloodred Hourglass, Korpiklaani, Turmion Katilöt) and international (for booking in Finland: Amaranthe, Kamelot etc.) bands in their portfolio. The same wide range are the genres of the bands which go from metal and punk rock to classical folk.

Iiro’s ‘own baby’ Northern Solitude Entertainment (founded in 2014) is a booking agency and artist management company located in Jyväskylä (Finland) and is focused on heavy and extreme metal music. Let’s just give you a short 101 about Iiro. 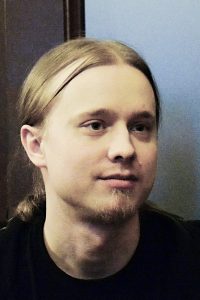 Superhero: Green Arrow  – “Ultimately, it is you and not the gadgets that make everything happen!”

Iiro  – The Analyser and Multi-Job Man

Communicating is the beginning and end of everything – either for networking and/or promotion. Each promotion needs a solid plan and no way to do this without budgeting and tons of calculations. And then the promotion needs to reach its goal: the audience! How and where would they most efficiently get the information?

Iiro and his jobs seems a lot like a marriage! We’re still not pretty sure if that’s a good thing for him or not. But he seems to be quite fine while working his ass off and one thing is for sure: Managing music requires just as much time and idealism and drive as making the music. Iiro tells me of his working day starting at 9:00 and ending at 9:00 mostly at least, sometimes later and then there is his new job which requires writing emails and stuff even after that – each day of the week. Sunday included. Eating and sleeping is not considered his first priority, he admits frowning. It’s not about the money. But he started his own agency, Northern Solitude, hoping to make a little bigger share for himself some years back. Still he entered NEM agency roughly three years ago and studied at the same time to get the theoretical background and graduate. But then he says, the four years of working in the business – in his own business as well as in the local association in Jyväskylä – provided the most useful background for his current job.

But then what’s in for the bands to have a booking agent? The major benefit would be the access to Iiro’s network of contacts to venues and other parts of the music industry. And this will also save a lot of time and effort as he will pick up the phone and call someone he knows while the band might write emails and try to call in for months and fail for months to get a reply.

Iiro, he is driven to work with the bands he likes which makes his work a personal benefit to him. Besides, of course, being strong in communication, Iiro says he is a very analytic person and good in planning, that he is able to communicate with different personalities despite being an introvert which is the main obstacle, he says. He enjoys being on his own but at least it does not feel hard or demanding to him to get in contact with or connect to (new) people as such as other introverts. “You need to be social and deal with a lot of different people whether it’s the high-class professionals at fancy galas or your sidekicks (colleagues, bands, etc.) at the darkest corner of the world. Furthermore, certain sort of stubbornness to achieve your goals is quite essential in order to succeed over a long term.“

Iiro is still very young and yet very experienced. It is amazing with which passion and effort he is working. Speaking of the biggest obstacle in his personality I am not convinced it really is his kind and degree of introversion as looking into his eyes you may easily find evidence for the uncounted hours and few breaks he takes. He is dedicated to what he is doing and perhaps it is that what enables him to run the twin festival as its promoter and booking agent many of the bands. What seems joint forces means in the same moment two jobs and keeping two perspectives in the same moment. Quite a challenge.

Iiro on Passion and Distinctiveness

So what does it take to impress Iiro? And that is quite simple: Passion and enthusiasm he found in several bands he has worked with. And then what keeps the fire burning, even through back drafts and over decades? And as always in metal: money is neither the key nor the answer. It is about doing what you want, to express yourself, but joy and experience of doing music.

Iiro highlights the essential role of approachability which nowadays equals the efficient use of social media while being approachable for example after show can be important if it is authentic. Anyway distinctiveness is a factor that he regards it very helpful on the market. But then being able to make best use of all the strengths the band members have might make all the difference. Whatever the musicians can bring on the table to reduce costs of production, such as graphic or video editing, can be a major benefit.

Promoting the winter indoor festivals in Jyväskylä and Helsinki was an additional project. Iiro established JKL one year earlier and made it a twin festival so he could offer the bands two gigs which is naturally more attractive then only one gig. Both venues attracted a comfortable crowd, and as the Nosturi has had a proficiently working team for many years, Iiro decided to spent his time and workforce on the shows in Jyväskylä, also as here it is also a bit more demanding to mine an audience of a suitable size.

But then what is a suitable figure for the audience speaking in terms of budgets and cash flow not only of festivals but also shows of individual bands. It depends on the terms a venue offers, he says. And while it is hardly possible for a band to make money from album sales nowadays, Iiro explains that shows and tours often reach the break-even. The one element that might make the difference and cover for other investments of a band would be diverse, well distributed and finally easily accessible merch items – that’s “where the money is!” And this way we are also back at the point of social media use, of course.

I got to know Iiro as person who cares. His dedication does not pause on Sundays and he will always find a quiet spot to listen to the worries of the musicians whenever that is needed. And he is the definition of efficiency. When I did an interview with the band he manages, Vorna, he managed the appointment, the slot, the frame and he sat in the camp while his band spoke of him as a kind of seventh band member. He proof-read himself and arranged the band to proof-read in almost no time.

It is also important to him to make the audience feel good, he says. And audience is a good topic because for quite some years the figures in ticket sales were declining. But they are growing again, also in heavier music, “little by little”, he describes. The format of shows makes a difference but even more, Iiro points out, it is about the promotion. If this is good – in regard of timing, reaching the people potentially interested in the shows – and those shows then present bands that are trendy in this very moment, shows tend to work out quite well. So he relies on his intuition and then signs the bands he likes.