It’s a rather cold and uncomfortable February day when people start queuing up at the entrance of the Substage in Karlsruhe and the reason is well known for spectacular high-speed guitar solos, to say so, the fastest band of the universe with an average of 200 bpm during their songs. Some people are also curious because they will present a new bass player. Anyway, let’s wait (in the cold) and see (in the warmth of the venue) …

The Substage is located in Karlsruhe Oststadt, not too far away from the motorway A5, at the Kreativpark Alter Schlachthof, an area which hosts bars, venues, workshops for artists and more (as the name says) creativity centers.
It is a mid-sized club with a capacity of about 750 and has the advantage of a little balcony and a small gallery left of the stage so even lesser tall people have a quite good sight. The bar on the right overs a broad counter and a nice selection of non-alcoholic and alcoholic beverages for a really fair price. The café in the first floor can be reached from an external entrance and offers a fine selection or dishes to feed your appetite for food. Parking is the least problem because there is more than enough parking capacity on the ground of the area for free. 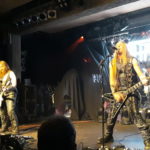 However, we are not there for food and workshops but for some really heavy and really high-speed metal music. So first band to open the concert is Athanasia, a three-piece combo from L. A. Their sound is influenced by classical, death, black and trash metal though their famous stage outfit by Ant Handcraft seems to be very inspired by the metal gods of Judas Priest. They rely a lot on power chords, which doesn’t exactly meet with their much higher musical skills. It sadly also doesn’t align with the taste of the audience. Although they spray enough sparks sadly the ignition doesn’t really work. They already had a better audience in this case so far. Maybe it is just the right band for the wrong audience this time. People are too sophisticated with too great expectations to listen to some straight, ear-shredding metal. And maybe naming the headliner “Dragonfart” – “accidently” – and meant as a joke didn’t help much either? Remember, Germans have no humor, it’s said.

Not The Iron Throne But The Frozen Crown

Second support is Milano-based Frozen Crown and surprise, surprise for those who don’t know them, they have two women in the band. One is the main singer – who also speaks some German – the other is the lead guitar player who – as the next surprise – also is left handed; two features, which still are rarely found in bands. 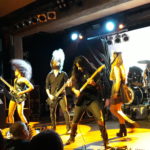 Because there must be more surprises, it turns out that the rhythm guitar player also is a pretty good singer. He catches the high tones as well as the growling.
Their sound is a wild mixture of the melodic metal genres, influenced by bands as Nightwish, Epica, even more progressive Lacuna Coil just to name a few.
Apparently their bass player lives on a strict Duracell batteries diet – remember the TV spot in the 80ies with the drumming stuffed animal rabbit? The one that played and marched much longer than any other rabbit because he used Duracell batteries? And so is he, left, right, back, front of the stage he simply is everywhere without forgetting to play his bass guitar. At all, their sound is quite catchy and reaches the audience much better than of Athanasia.

Everybody who ever played „Guitar Hero“ and failed with the one specific song will know the headliner, head banger or not. The song is “Through the Fire and Flames”, it was recognized as its most difficult song, the band of course is Dragonforce.

We will not speak much about the well-known guitar skills of Herman and Sam, the voice of Marc or the drum technique of Gee though. Let’s instead have a look at the new bass player since Fréderic left last year. There were a lot of rumours going around, a lot of auditions held and finally the bass player of a so far more local L.A. band made it. Nobody less than Alicia Vigil of Vigil Of War! And yes, she is a very good looking, young lady, but her great musical skills are undoubtable over the top. So we can be sure, she was hired due to her skills and if she was a man, she would still be the same excellent bass player chosen by Dragonforce. 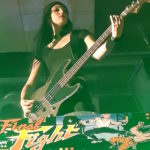 The setting resembles a big computer game, designed and handcrafted by the band itself. The two console towers to the left and right of the stage remind me a little bit of the stage of The Who’s 1975 masterpiece Tommy when Elton John plays the „Pinball Wizard“. The drums to the right, a dragon to the left, a big video screen in the back of a little gallery complete the stage. The opening ceremony exactly shows where the road of this show will lead us through nothing less than a big, dream come true and alive: a computer game! This again is reminding me of the stage parts of Tommy but as the young, modern grandchildren. First song is „Highway To Oblivion“ and indeed, we are not only on a highway but a high-speed power metal race track. Other songs follow in such an incredible speed, no one notices that most of the songs are more than 5 minutes long! In addition, there is visuality, left, right, front, back, one doesn’t know where to look first! A lot of confetti here, fog rays there and then something happening on the video screen.
At one point, only Marc and Alicia share the stage for the „Video Game Medley“. They climb the towers for an amazing guitar/bass duel – honestly not expected but when you have such outstanding guitar players in the band as Sam and Herman – but highly deserved. Anyway, it is pure fun and entertainment when you notice how much fun each member of the band apparently has during the show. I’ve hardly seen more smiling faces on stage during a metal concert. 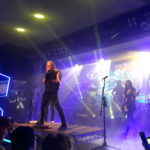 In The „Valley Of The Damned“

Another proof for it is Sam’s interpretation of a farming simulation with a Banjo on his knees, given that farming simulation is the highest selling computer game in Germany as mentioned by Marc, who – as the entire band – is a fanatic gamer. It is also the time when both guitar players of Frozen Crown join the stage, climb the towers and play the song together with Dragonforce. „We have a special guest here, his name is Vish and he flew so far from India, Bangalore and we dedicate this song to him“ – these words from Marc are amazing and indeed address a guy who is at his first-ever metal concert. I had the honour to meet and talk with him when we were waiting at the entrance. He stays in Germany for half a year and tries to catch every metal concert he can get because India is not a very big market for metal.
And we have Louis from Spain, brave enough to join Dragonforce on stage to sing along „Cry Thunder“ . So an Indian and a Spanish guy make this show in Germany quite unique, well done both of you. 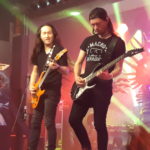 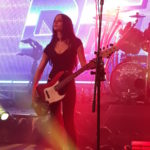 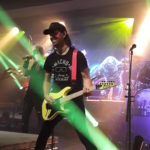 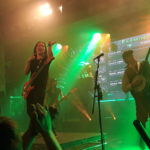 After some very short 100 minutes and the “last” song „Valley Of The Damned“ it is time to shout for some encores and we don’t have to wait for too long.
One of the encore is „My Heart Will Go On“ – a brutal cover of the Celine Dion song – and the other one, as expected, „Through The Fire And Flames“, the song everybody has been waiting for. It is a furious last song but in the middle of the song during the guitar duel apart from Gee, none still is on stage. Where are they? Is it all fake? Is it playback as Queen did it with the middle part (Galileo, Galileo, Figaro) part of „Bohemian Rhapsody“ because it was unplay- and singable for the band live on stage? No, we all failed! Remember the broad counter of the bar mentioned in the beginning? It is broad and strong enough to host two guitar players and one bass player at once. They decided to “look for a drink” and play not at but on the bar! Pure fun and an experiment how far the guitar transmitter would reach. Returning to the stage, the song soon is over and it is time to say goodbye, for tonight but not forever. After the American leg of the tour Dragonforce will return to Europe for some festivals so if you missed them this time, that’s your chance. 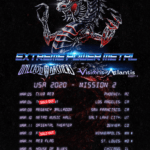 After the show, the venue slowly empties – too strong are the visual impressions as to just leave and go home. Most people are happy to have a last drink at the bar or again look at the merch tables were the members of both support bands are signing and selling their stuff and have a chat or pose for a photo. Later on Sam also pops up here to share some beers with those still around.

The Lady on The Bass Guitar 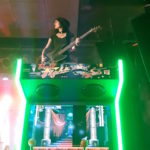 In addition, one can find Alicia amongst some of her friends and fans who came to the show especially for her. Of course, other people fall in to ask for a photo or just to express how well she did. Interesting side fact, she speaks German quite well, she learned it at school, because the mainstream people chose Spanish. She really is an outstanding personality and certainly to recruit her is a win-win situation for both, Dragonforce and Alicia. It is amazing to see how fast Alicia caught up with the rest of the band, given that four days before in Antwerp they played together for the first time at all. She is doing brilliant, as a real part of the band and proves to be the perfect match for Dragonforce. Have a look and a listen at her own band Vigil Of War, not quite the same genre of metal but very catchy, very rough; and you will find out, Alicia not only is a gifted bass player but also a very good singer and songwriter. You never know, maybe we have seen the new Joan Jett???

The Better Photos Of The Show…

And now, finally some really cool pics of the show, taken by Maryline Crucifier, enjoy!!! 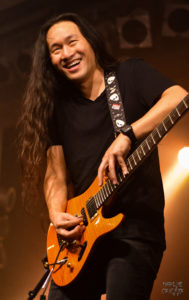 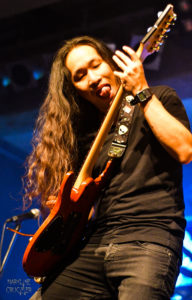 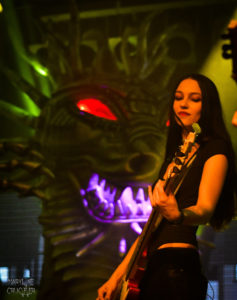 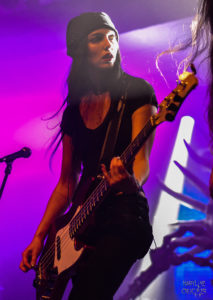 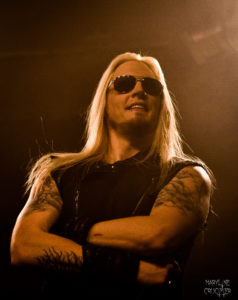 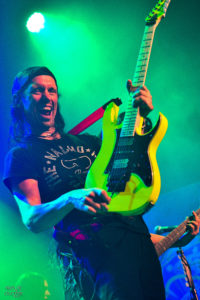 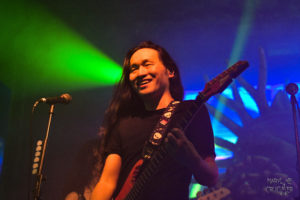 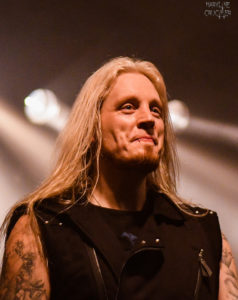 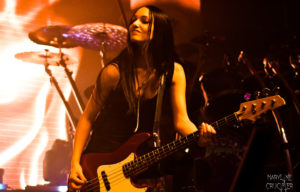 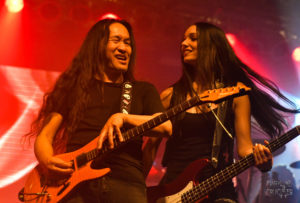 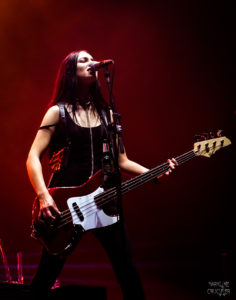 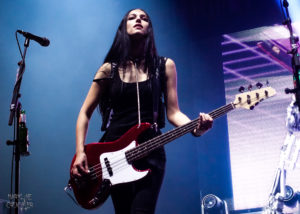 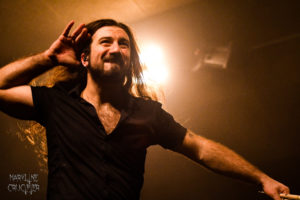 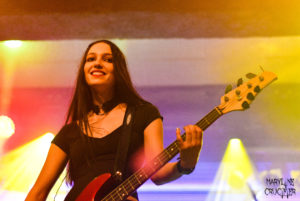 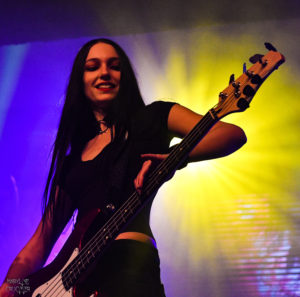