From a ‚heart‘-drive to FLAT EARTH – the complete exclusive interview

A couple of songs on Niclas‘ hard drive (or ‚heart‘-drive speaking in Anttoni’s words) were the seed from which FLAT EARTH has grown. Are they newcomers? A superband? Veterans? Or hilarious geniuses? Former ‚Heartagram‚ (HIM) instrumentalists Gas Lipstick (Mika Karppinen) and Linde (Mikko Lindström) joined the former Amorphis bass player Niclas (Niklas Etelävuori) and found in the Polanski singer Anthony (Anttoni Pikkarainen) their perfect match, conneting these grownups in his emotion club. Their first single, „Blame“ will be out any moment. You might just have enough time to read how they met, how the success of their crowd funding and growing number of street teams has overwhelmed them and finally explore their incredible band chemistry and personalities. Their humble, humorous, honest, heart-warming, hard-working and a lot more. I am afraid there is no way not to love them! (This is the complete interview. >> short version)

“How are you?” – NIKLAS: “Well, now it’s pretty calm. We’re waiting for the mix to be ready. So we can’t really do anything except wait.”

“You’re not yet at the point of sending the mix round, commenting, forwarding and so on?”– NIKLAS: “That’s gonna happen before it’s finished but still… everything is recorded what we had to record so we don’t have to worry about that. And now it’s just mixing that needs to be done and so that’s that.”

“But you did record the whole album already?” – NIKLAS: “Yeah. Well, there might be one guitar melody missing. But that’s coming.” ANTTONI: “There is?”  NIKLAS: “Yeah. There was some problem with the connection.“ ANTTONI: „With the connection?“ NIKLAS: „With the cable all sorts of stuff. We didn’t find the right cable to the interface. Well, we have to do again.” ANTTONI: “Very technical.” NIKLAS: “That’s technical but …”

“Sounds a bit like stage problems to me?” – „Yeah, could happen“, NIKLAS says with a frown, “ well, it can happen in the studio anyway.“ We both laugh, and ANTTONI says: “Well the studio, it’s like show for us!“ Now also laughing, NIKLAS: “Yeah, yeah. If you go to show you always need to have the right connectors and cables with you.” ANTTONI: „Yeah, thank God, we got people doing their jobs.“

“So you’re hot on playing live? It seems like it.” – „Oh yeah!“ and NIKLAS‘ voice is quiet but the passion for shows leaks out in the melody of his sentence: „I haven’t played live in over a year now.“

Ok, time to admit, I really have a hard time in general to control my enthusiasm and let my interviewees end their thoughts not interrupting. But at this point the conversations grows emotional in the best of senses and we all tend to speak a bit earlier. First me. Then ANTTONI, too. And then even NIKLAS. Well, music is an emotional thing, right? And it happened again and again.

“That’s quite a long time for you considering your earlier schedules.” ANTTONI: „And all together, we have never done it, so …!“ NIKLAS: „Yeah. Next summer is our first show. Qstock.” – Me: “Yeah, I read. A good one.” – NIKLAS: “It’s a good one and there are a couple of others coming. But we’ll announce them a bit later so now …“, his voice fades slightly. “Everything at a time…” NIKLAS: “Yeah. But this is nice. I mean, QStock it’s been one of my favourite festivals in Finland anyway. So it’s nice to start there.” – Which makes me wonder, “Hm, good question, which is actually your favourite festival?” I ask looking to ANTTONI: „I would have to say, it’s Provinssi because it’s the only one I have ever been to.“ NIKLAS: „QStock is nice because it is located close to the city so you can go there and go back, and go there again and you don’t have hazzles with bus transportations. It’s compact.“ ANTTONI: „And the way Niklas sees festivals like is the systematic point of view. He’s gone to play them all.“ I smile and NIKLAS frowns slightly uncomfy, thereby underlining his understatement. ANTTONI: „So he can actually have a saying what works and what doesn’t.“ NIKLAS: „But I never played on this stage before!“ He takes a second and adds: „I think.“  ANTTONI: „Something new“ in a bit pitchy voice. I am laughing. „Oh, really, some kind of premiere left?“

Just this morning I had watched the video from their chat session which has lots of background noise so that it is hard to understand all details and I wonder if I got it really correct that they all met at the military service. ANTTONI laughs. NIKLAS: „No, actually I met Gas. When I was a soldier, Gas was a soldier but he left earlier than I did. And then when I got out of the military, we met in some bar in their band was looking for bass player which was Kyyria“ – „Kyyria“ we say nearly at the same moment. „So I ended up there because their bass player went to the army. And he is now with us. Kimmo. He is our …“ and before NIKLAS can finish his statement an overexcited and loud „Whaaat?“ echoes from ANTTONI. I am laughing. „Awesome. – So what about Linde’s army background?“ ANTTONI asks. NIKLAS: „I don’t think he did it. I am not sure.“ – „Me neither, because I am Swedish. Because when I turned 18 nothing happened. All my friends went to the army. Then I made a phone call asking like ‚I didn’t get that letter!‚ And they were like ‚Who are you?‘ Then I am like this and that. And they’re like ‚Nope! There is no record of you. Go to the police station.‚ They told me like to go to the police station to ask who am I! And they’re like ‚You’re Swedish.‚ I am like ‚Op. Äh. Yeah. Sure.‚ No army for me then.“ NIKLAS has tried several times by now to say something. „You didn’t miss much“, he says half loud. ANTTONI: „I ….“ NIKLAS: „But anyway it was a funny coincidence. Actually I met him quite before but when I met him there and after the army was over we ended up in the same band.“

„What did it take you to get them all in in end? I heard a lot in the chat but then what did buy them in finally?“ NIKLAS: „Oh, I had the songs. When I called Linde, I wasn’t sure if he would like what I had done. You know he has his own things going on and so. But then he came over and the next time he knew all the songs already“, NIKLAS explains in a rather technical voice. „That was the starting point. And that’s how it should start, that you don’t like what you do there is no point in starting it“, he continues more relaxed.

So it’s all inspired by the music? ANTTONI: „Absolutely!“ NIKLAS [at the same time]: „Yeah, I mean like everybody who came has his own input to it now. So we are open. And I am sure Linde plays better guitar than I do.“ Niklas takes his drink and sips while uttering some confirming hums as ANTTONI explains „And me getting in, I did have a full day of 24 hours of thinking before meeting you. I was trying to figuring out if I would have some problems with approaching the idea that you had music.“ He turns to Niklas: „And meeting you guys, it was obvious that it  i s  a great club! Let’s be a part of that and then hearing the music it was like: ‚Oh fuck. That makes sense. Let’s make this music.“ 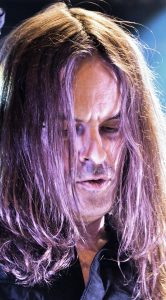 I nod and ask – just to be sure: „So they granted you a full day to decide?“ ANTTONI: „They gave me 24 hours“ And NIKLAS half loud says „Hm, yeah.“ – „Who needs thinking?“ I ask. NIKLAS: “And that was generous“ ANTTONI laughs out loudly „Generous?“ While I point out, also laughing: „Extremely generous!“ NIKLAS points out: „…. he should have been like in charge then! He had to take the deal now!“ ANTTONI: „A friend said: ‚Can you meet us tonight?‚ And I ‚no. Can’t do this.“ – „So you had to discuss them into granting you those 24 hours?“ ANTTONI nearly singing. „I guess sooooo.“ I can’t help laughing. „I guess so“, he repeats, „like pawns on a chess table!“