From a ‚heart‘-drive to FLAT EARTH – the complete exclusive interview

Forming a Band Around Your Just Sketches

„Ok, got the point“, I say trying to swallow more laughter and getting back to my questions. „So how important is idealism to start over? I mean, don’t get me wrong“, looking at Niklas, „we’re the same age and if I’d consider starting over, this is a big step!“  NIKLAS: „It really is. But I mean I was at some point thinking maybe I start doing something else. But then I knew I had these songs on my hard drive still and nothing was done with them. And I just wanted to get rid of them [starting a new band only to get rid of some songs … interesting idea, I think]and see what happens. But then it kind of took over and I started to focus more on that.“ I am laughing again. Now this dedication in its purest form! „And then I forgot all about everything else I thought of doing.“ Shaking my head in awe, „Now that’s passionate“ slips my tongue half loud but he hears it anyway. NIKLAS: „Yeah. Originally I think I had twelve ideas and I listened to them for a while and ‚fuck, that’s crap‘ and ‚yeah, that’s good. I keep that.’ And when Linde came first, I think there were about six structures or something like that.“ There is a meaningful sort of silence in the air when ANTTONI begins: „And to be able as grown up“, he says slowly and with momentum, „and doing music and being capable of forming a band around your just sketches, your ideas, is unbelievable! I would say“, and he looks more to NIKLAS again, „nobody has this privilege of being where you are and just doing music, and creating all of a sudden a band out of your own ideas.“ The heavy emotions of ANTTONI’s words still linger when NIKLAS’ understatement crashes strikingly into it: „Yeah, it is fun“ he says humbly. „I mean, I go like I’ve been playing music most of my life. 25 years in bands and stuff like that.“ ANTTONI comments the emotional shift with some half loud laughing. „So I go, what else should I do? I’ve been doing this all the time. Why don’t continue?“ I laugh half loud too, and NIKLAS pauses for a second. „I mean now I can have more input than in and it is good company to be in …“ I look at ANTTONI and say.

The Most Chemical Chat Ever

„It seems so because the chemistry I noticed in the chat video it is amazing.“  NIKLAS: „Yeah, it was. It was the most chemical chat ever!“ ANTTONI bursts out in a fat laughter and pull me into it. I fight some tears. Niklas continues in a pretty much on the subject voice: „But nothing like that has ever happened before.“ – „Sorry„, I am still laughing and ANTTONI takes three or so attempts to begin his statement: „I just want emphasize the fact that kids doing music, they can’t have these privileges“, he finally explains calmly, „kind of freedom of doing music.“ NIKLAS hums in that he agrees several times. They have to do so much ground work that you have already done, Linde has. I kind of have maybe. I don’t know if I have done my share. But to be able to form a band when you’re past your teenage years, is“, he pauses, „I think it’s phenomenal!“ – „Hm, yeah“, NIKLAS says as if it was nothing to him, „people form bands still. And as old musicians, what else can you do?“ ANTTONI is really excited now: „Yeah, but forming bands!“ NIKLAS: „When I was the first time playing with Gas, there was only the two of us and had not played … ok, Kyyria finished in ’98 and then we did 2005 or something like that was the last time we played together. And I had not played standing up for like eight months.” He laughs shortly. “And I was like ‘fuck what you do?’ and then in the end it was like what we used to do.”  ANTTONI: “But Bands! You know. Grownups and bands usually mean that you have players, friends, mutual connections coming in playing on your records. It’s not about the same system that we had like as teenagers forming a club.” NIKLAS: “Yeah, yeah.” ANTTONI: “Which is just what we’re having. And that’s just something that you can’t buy with money nor the input that we have already put to music.” NIKLAS keeps supporting ANTTONI’s explanations with some hmmms.

I wonder if there was some kind of attitude casting while forming the band to make sure the group works in the end. “Yeah”, NIKLAS says before I can end, “Linde was my first like choice but I was a bit, you know, or thought that he would probably have other things to do.” Anttoni is laughing on Niklas’ understatement once more. “I didn’t ask first but then a friend encouraged me: ‘hei, you should call him’ and then I called him and then he came. I mean at that point it took quite a while, maybe a month or something. And I didn’t hear anything from him and then when he came over … well, when I didn’t hear from him in a while I thought I would call somebody else but then he came over and then the next day he came with his guitar and then we recorded all things and that was perfect. A lot of things I have done if that would have happened a year ago that wouldn’t maybe have materialized because it’s all about timing. People have to do things …” ANTTONI: “Sure is, then…” NIKLAS: “A year ago if I had asked the same thing maybe he would have said no. But then we were lucky.” And he adds after a second: “Blessed.” ANTTONI repeats: “Absolutely. Blessed.” NIKLAS: “Yeah.” ANTTONI: “Well said.”

There Is No Point to Try To Quit

Absolutely, I agree. “Do you guys have some kind of benchmark you want to hit? I mean this in more than an economical sense, of course.” NIKLAS: “Yeah, I mean, our new benchmarks come as you go. Our first benchmark is just to get this single done and then see what happens. But of course, it goes on and then we have to get new challenges and things we have to deal with. I have played in so many places that I don’t do it because of being famous or anything, it has to be fun. And as long as I feel we have something to give I guess it will be fun. But then if you run out of ideas then it’s maybe better to take a break.” This is one of the moments the music in the background sounding in from the actual bar adds perfectly to the atmosphere. Some relaxed reggae highlighting the fun that live and music should be. We laugh acknowledging. „My benchmarks are always very personal and social. I am just interested in you”, ANTTONI looks at Niklas, “in Linde, in Gas. And I wanna see, what we have for each other and just try to become a better man. Basically. The music is a very … hm, sort of a by-product.” At some point in this statement NIKLAS utters a half loud “Thanks.” Afterwards he says: “Music unites, it is connecting people.” ANTTONI: “Absolutely. I think it’s a good form for well-being.” NIKLAS: “It’s very hard to give up, so a long time ago I was down, I mean when Kyyria went down. I was like ‘Fuck this up!’ I will do something else and then I played for almost twenty years. I know there is no point to try to quit because you can’t if it is in you then it is in you. I might have a break for some weeks. But after that I need to touch something that makes some sound”, NIKLAS explains frowning. 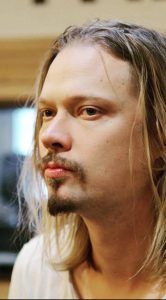 “Art is a matter of must, someone else said in an interview. It forces its way out.” NIKLAS: “Yeah, it is like that. Even if we’d never release this, I would have anyway done.” ANTTONI: “… in a way or another.” NIKLAS: “I had this stuff on my hard drive, and I knew I had to do something with it before I die.” ANTTONI forms a heart with his hands and repeats silently “heart drive”. I wonder if Niklas is able to cancel material he has. “No, what I mean, I do that all the time. Sometimes I maybe thrash stuff, that I shouldn’t”, he says smiling in an excusing manner. “So that sort of happened. But suddenly I saw the light. And that’s a process I mean. It starts sometimes you have like 50 ideas. And one year later, you throw 30 of them away. And you have 20 of what you think, ‘ok’. And then not anymore but in the end you have ten songs.”