OK, I missed Radio Rock, Finlands number one radio program for the harder music, playing “Blame” by Flat Earth for the very first time. F*! But then the internet is not really forgetting anything and thus, soon I got my opportunity. The teaser had been promising already. Anttoni’s voice sounds different on the teaser than I knew from Polanski and it does even more considering the now digitally available, complete song. But let’s get started from the beginning. 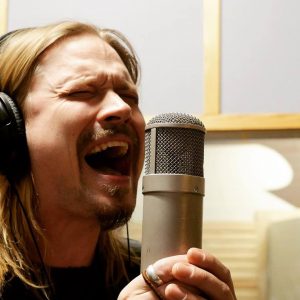 The intro has a keyboard passage – it immediately reminded me of a song I had known for a long time, a very long time. Which was it? I search my collection and: ‘ah, yes, there it is’. “When Love and Death Embrace”. And despite the grungy, actually more subnote than note, there is more spirit from His Infernal Majesty in the song. It is the seductive sweetness in Anttoni’s voice that makes me think of for example of good, old “Beautiful”. But then Anttoni sings actually even sweeter. Softer.

I asked him if there is a particular story he relates with the song (from the writing or recording) and there is. Guess what, it is about the softness of his vocals: “That was actually the first song I recorded vocals to. So we were getting into the right mood with our beloved producer Hiili and there definitely was a strong scent of excitement in the air. We had no idea how this was gonna take off and since everybody else recorded their parts so quickly I was in that record-breaking mood, ready to track stuff in double speed. It quickly became obvious that my approach was too manly for this song. So Hiili was forced to repeatedly tell me to soft my act up. You know „Softer. Softer. Really soft now. Get really close to the mic and do it really soooft.“ I was laughing between the takes ‘cause I thought I was so doing it really soft already! I had no other option but to go ‚all in‘ soft on the track. And then a couple of days later he has the nerves of telling me that we might have to go back to that song! Well, luckily we didn’t.” I just wish that next time I can be the fly on the wall of the Finnvox Studios and experience it all live.

“Blame” comes with a strong cynicism. First there is the bloody setting of the lyrics. I find it somewhat difficult to relate such violent and emotionally heavy lyrics with the wild optimism I faced when meeting Anttoni and Niklas. But then they said (in the interview) that writing music and lyrics is about digesting what pulls you down. Such as the perfect setting for writing lyrics would be a horrible day, the moment of coming up with these lines surely was a most horrible one, I think while picturing the violent, blood-dripping setting in my mind. So “Blame” is like bittersweet, dark chocolate: Sweet tunes, bitter words. While the instrumentals flow often like a peaceful current, steady, yet very catchy, and carry even a bit of easy-going mood in Gas’ drumming here and there, the lyrics get rough and bloody. Dive into them. Taste the chocolate. Imagine the setting. Smell the adrenalin. Enjoy the bitterness. I like such sarcastic compounds. 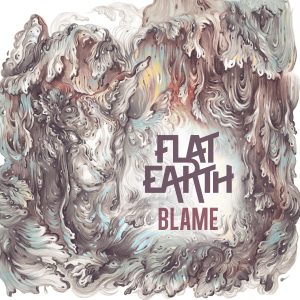 The arrangements provide some depth and the perspective to enjoy the song on long run a lot more than a mere earworm. What I like in particular here is that the welcome breaks in the course of the instrumentals are perfectly matched by the vocal tunes. Interesting, perhaps even unexpected turns in the instrumental lines are spiced with a bit of Linde’s classical guitar shredding and cloaked by the warmth, well-known from many Amorphis songs, of Niklas’ bass play. Familiarity combined with the esprit of a young band kicking off, their burning passion and the accumulation of musical skill and talent – that’s what makes Flat Earth’s first single “Blame”.

One week has passed by since presenting the single to the public. “So what was the first feedback like, Anttoni?” – “Over-the-top-whelming comments have filled all my inboxes. I’m so excited and happy that there’s people who like the song, couldn’t be asking for more.” And how about you? Let’s know how you like the song!

PS: The single is digitally available on many, many portals. Check out Flat Earth’s website!