„I am The Computer“ – Meeting Tuomo Latvala (Omnium Gatherum)

The Dark River Festival is a perfect setting for accidental interviews. The relaxed atmosphere invites to forget about schedules and duties in a conversation that simply happens as a mutually interesting topic meets an occasion. This pretty much explains how I met Tuomo Latvala, drummer of Omnium Gatherum and why it took him several attempts to pack his gear. 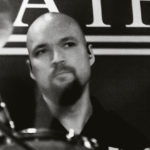 Omnium Gatherum just ended their gig when, I come backstage and take a break of my own watching them packing their gear. One after another, the musicians take a moment of rest and a drink themselves, chat and then resolve packing. Playing in Kotka at their home base is always special and it feels a bit like home even for Jukka Pelkonen (from Helsinki), he replies to my question. The drummer’s job on stage is a full-body workout, even a little more than to the rest of the band. Therefore, Tuomo lingers a little longer. His shirt is sweaty and his blood filled to the brim with endorphins. He smiles and appears content with his own life, the world and the universe. Does he have a minute? He has. 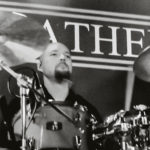 As we are waiting for Tuomo’s drums being ready to get packed, I wonder whether he is setting his kit up himself? Setting up a drum kit takes quite some time and certainly more time than any other instrument. Thus, it is not surprising at all that so many drummers ‚techies‘ (often friends and drummers themselves) to help here if not to set up the kit completely. However, Tuomo points out that he sets up his kit himself. Alone.

Tuomo plays a rather big kit with double bass, several toms, hi-hats, cymbals and so on. Yet while touring or playing on festivals drummers often (have to) use provided kits, either endorsed, shared, or rented. So, Tuomo travels without gear? Not exactly. As for such occasions, he usually still brings along his pedals, cymbals and drumsticks, he tells me.

Setting up the kit gets even more a challenge as you can never know with which gear you end up. However much is provided, the whole kit has to fit Tuomo’s individual and thus unique requirements. Which part of the kit is for Tuomo the most critical and with which he begins usually? He says, he usually begins with the stool. Its position and height are essential for Tuomo’s own sitting position. It determines how he sits, how well he reaches to his pedals and single drums and how comfy he is while playing. Then all the rest falls into place or more precisely can find its position.

„I am The Computer“ 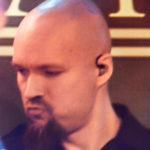 Tuomo is about to leave in order to begin packing his valuable gear. The first item I can think of as very valuable and invitingly easily to be stolen is the laptop you will usually find on stage. But „I am the computer„, Tuomo says! He stays to tell me that Omnium Gatherum do neither use in-ear monitors nor click-track on stage. Although I spoke with Jukka about this and the ongoing discussions about this topic already years back, I am still somewhat surprised again. Tuomo’s drum parts are fairly fast and technically demanding in the no less demanding and complex setting of Omnium Gatherum’s songs. Such a situation easily tips the balance pro click track. „Omnium Gatherum are old-school guys„, he says with a smile that reveals how happy he is about it. Sticking to this traditional role of the drummer ‚to keep the band together‘ is important to them, he tells me. Moreover, here, we enter the realms of the philosophy of Omnium Gatherum. They love playing shows and they do play quite plenty of them annually. They enjoy varying, feel and respond to the atmosphere of each show, the venue, the audience, their own moods and sensations, and make a whole from all of this. Tuomo goes on that thereby no show is like any other before or after. In addition, this old-school way of playing without all this fancy stuff is a key feature of the setting. It needs a trace more interaction and minding carefully what the band mates play, but the openness to connects with all the external influences that make each show a new one. With some enthusiasm in his facial expression, Tuomo highlights that this authenticity possesses a high priority to the band.

„Fast Enough For This Band“

Then again they do use click track, of course, when recording in the studio, Tuomo emphasizes. In the studio, he says, it is all about the precision that is essentially needed for the recording. While on stage the complex of all the individual factors of this very moment merge into the bigger picture making the priority, while in the studio all the tiny details need to add to perfection. Personally, I understand Tuomo as a fast and precise drummer (well probably I should mention that I am not too much a fan of songs beyond mid tempo). He takes it as a compliment and smiles, mumbling, „fast enough for this band.“ We both laugh on his understatement. In his own point of view, he rates his skills apparently lower. Thus, Tuomo mentions the ‚younger‘ bands and drummers, speed-driven perfectionists with whom we would rather not compare only to sum up that his skills and speed match with Omnium Gatherum’s demands.

How passionate is Tuomo when it comes to playing his instrument? Is it still the one thing that means the world to him, I ask. Naturally it is. It is very loud in this moment so I cannot exactly hear what he says. Then again, the shine in his eyes says everything and far more than words could possibly say anyway. The point I am up to is that post-recording computer-based editing in the studio has become somewhat overly important in my understanding. I remember speaking with Aksu Hanttu (drummer of S-Tool and Entwine, for example; and recording engineer) who explained me how much empathy and sensitivity beyond all technical proficiency is needed on the side of the producer to hit the thin line that tells required adjustments from alienating. The drummer’s groove, in Aksu’s view, has indisputably to be kept and favoured over plain, but soul free technical perfection. 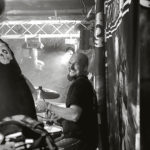 Which role do those play when Tuomo is in the studio? Of course, some minor corrections are needed and acceptable here and there, Tuomo explains, as it is very difficult to play one song without any mistake. Sometimes the first take turns out to be the best and still has a few mistakes for example, when he was not entirely precise. For the recording, precision is but the top priority and consequently corrections not fully avoidable. But those have to remain in the scale of  m i n o r  adjustments, Tuomo emphasizes; otherwise for what would he be needed at all? The drums can be completely programmed instead of played and recorded, he says. And many do, we all know. Alternatively, they could completely quantify digitally the drumming, Tuomo illustrates. But then it is not a drummer’s work, he concludes.

Writing these lines, once more my very first interview with Tuomo’s band-mate Jukka Pelkonen echoes in my mind. We spoke of how to identify the perfect match for Omnium Gatherum when a position is vacant. The bottom line was and is that matching personally with the band dynamics exceeds the role of instrumental perfection in the very end. This is far more than getting along in the tour bus on a six or seven weeks lasting tour. It is not limited to the personalities, fitting the band dynamics or finding one’s niche in the non-musical processes such as the creative or management tasks. It needs to include joint or at least similar attitude in fields that are critical for the band’s philosophy such as this, let us call it ‚old-school‘ spirit on stage and in the studio. So here we are back at shared values such as authenticity and honesty as to be experienced in their shows but just as much in the way they produce their music. 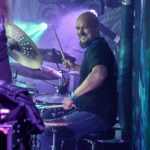 Back then, Tuomo was the band’s newbie. Practically, the recent album „The Burning Cold“ is the first album in the creative processes of which Tuomo has been active completely. Speaking of the older songs, how much of his own style does Tuomo put into them on stage? How much of the Jarmo Pikka’s style does he keep? And anyway what tips his balance, playing live or the creative/recording parts?
He loves both, he says, and both needs to have a sound balance. It comes as no surprise that Tuomo loves to play on stage when half a minute later, however, he is all in illustrating how enormously important it was for him to participate in composing and arranging the „The Burning Cold“ album. He is a doer, he says who got a kick out of contributing to „his baby“ and his face could hardly show more pride. Obviously, for Tuomo it is only natural to compose and arrange, contribute his share to the output on stage as much as in coming up with music. One natural question results from this point. And this is how does Tuomo deal with older songs on stage? There are so many ‚old‘ songs and only one album with Tuomo’s drumming. There is a range from sticking to the recorded version and drumming closely to Jarmo’s style, to making them Tuomo’s songs with his own groove. This point is crucial to him, I can sense easily. I haven’t met a musician yet who would love to be a copycat. But then it is a matter of respect for the other musician’s achievement and Tuomo shows his respect for Jarmo’s work. And yet he does not cover the original style. Tuomo’s maxim is defining his individual mix from sticking to the original style but adding a bit of his own, too. 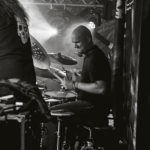 The third farewell hug marks his successful attempt to go back on stage in order to pack his gear. He excuses as his shirt is still wet from his most devoted activities during the show. I leave, too, take a drink and watch the busy work. I love those journeys into the depth of band dynamics and processes from an angle that often is outside the focus of our perception such as the drummer’s. Moreover, I do appreciate the trustful atmosphere I found once more!
Thank you so much, Tuomo, for this accidental sort of interview. By the way, Omnium Gatherum are touring all over Europe again!