Interview with Viper (ABOVE THE STARS)

I found their music only recently, now I´m wondering how it is possible that I didn´t hear about them earlier- Russian band Above the Stars. 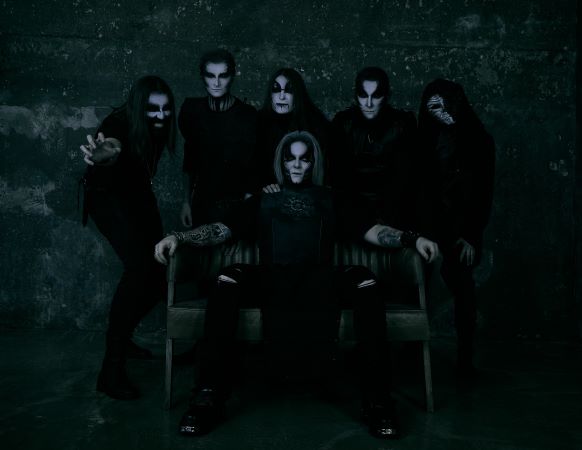 Hello from Obscuro! ABOVE THE STARS was formed in 2018. Who were the founding members and what inspired you to start your own band?

Viper: Greetings from Moscow and Happy New Year to you and all the Obscuro readers. Actually the founding member and the only one person left from the original line up is me. And ATS is not the first band neither for me nor for the other guys. To make a long story short I’d say that this band is the quintessence of the things we enjoyed in metal music cause the whole thing was inspired by our heroes from the teenage years – you can find very strong Iron Maiden, Cradle of Filth, Moonspell, Dark Tranquillity, Children of Bodom, Amorphis, Tiamat influences in our music. Yeah we have had a lot of heroes but our main goal was to make music INFLUENCED by these guys but not copied if you get what I mean. We have never wanted to become I don’t know… some kind of “Russian Moonspell” or “Russian whoever else” except Above the Stars. And I suppose that we are fine with this. At least at the moment.

I have recently come across your cover version of the song ´In the Field of Blood´ by LORD OF THE LOST and I was really impressed as it sounds even better than the original. Are you currently working on any other cover versions?

Viper: Oh thank you very much. Such comments and feedback are really very nice. I don’t know if our version is better than the original one but I have to admit that it’s good enough 😉 Yes we are currently working on some new cover versions and even planning to release a cover-album later this year. Of course we are not a cover band and this record will be released only after our second album. On this cover thing there will be some good old stuff like Crematory, Moonspell, The 69 Eyes and some more. But also there will be some covers of the Russian metal bands such as Catharsis, Epidemia and more.

Your growl is very powerful, in other songs you sound more like a gothic metal band- your work is full of surprises including the instrumental parts. How would you define your style and who influenced you most?

Viper: And thank you once again. To be honest I cannot say anything except ‘metal’. We have some gothic features especially on our debut album but also there were some black metal elements and melodic death and even doom metal. So with our debut work we preferred to call our genre dark metal – cause it doesn’t have strict borders. I mean you can say that Cradle of Filth on their late albums are dark metal. And Moonspell. Or Agathodaimon. But all these bands are pretty different – they sound different and they look different as well. The next thing I say won’t be very modest, but… We are very unique in some ways. Let me explain. Normally band has one main genre and some features from the others. And not only musical genre but also the visual. But Above the Stars is very different – we don’t put any genres at the head of the table. The main thing for us is the backstory of the album. So if we are doing a story based on Lovecraft books we are using very dark image close to black or gothic metal along with the darker genres of metal. But if we decide to do a story based on sci-fi – the image of the band on such record will fit the topic and the music would have more I don’t know… Industrial and electronic elements. But the only thing that is common for all our records is that the core of our music is based on good melodies, and mix of extreme and clean vocal parts. And now imagine what will be if we decide to write an album based on fantasy =)

Your songs are interesting both musically and visually- the video to the song ´Cats of Ulthar´ has a great atmosphere. I suppose that it was inspired by H.P. Lovecraft. Who comes up with the ideas for your videos?

Viper: Yeah you’re absolutely right. The song and the whole ‘Dreamland Conquest’ album were inspired by Lovecraft. And most part of our music videos are made by me – from the script to the final editing and color correction. I’m learning some new things, gaining new experience and making these things better and better. I think you can notice this if you compare ‘Cats…’ to ‘Eat me, Drink me, Follow me’ for example.

In 2020 you released the above-mentioned album Dreamland Conquest. How long did you work on it? Who is the author of lyrics and what is the main concept of the album?

Viper: Oh well… As far as I remember it took us about three months to do the whole record but due to some line up changes and personal problems the whole thing was done in a year. All the lyrics were written by me, the backstory concept was also mine BUT the story based on this concept was written by Glympse – our bass player. He’s a great writer and did a lot of work. What I love the most in his story is that it was really in the style of Lovecraft. And to make the things clear – I’m not the only working man in the band. Yes I’m standing behind the concepts, I’m doing the lyrics and vocals, I’m making music videos. But most part of the music is done by our guitar players Arilan and Maxx – these guys are extremely talented. The stories are made by Glympse as I’ve said before. And all the things are discussed within the line up. So Above the Stars are not the band of one man and satellite musicians. 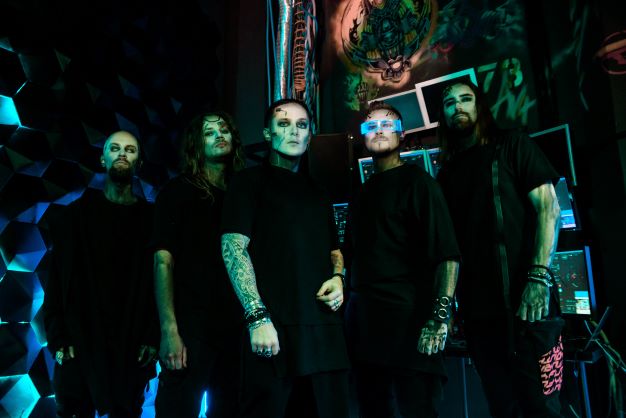 If you had to choose one song that best represents your music, which one would it be?

Viper: A tough question cause as I’ve said we are changing the music depending on the story. So I will just tell you what song is my favourite at the moment. It’s ‘Eat me, Drink me, Follow me’. This song was recorded featuring Ryoji Shinomoto of Japanese band Gyze. He did some ethnic instrument parts and some vocal parts and this song sounds very powerful – a mix of melodic death with some ethnic Japanese melodies, electronic parts, clean and extreme vocals. I love this song very much. And I also like experiments. We have used some Egyptian ethnic melodies on ‘The Ritual’, then we came to Japanese aesthetics. What will be next? Who knows. But we will continue with these experiments for sure.

I have seen your mascot Levi on your fb profile and as I am a cat lover I like it a lot. What does it symbolize?

Viper: Believe me Levi is not what he seems =) Our original idea was to represent one of the Ulthar’s cats as a mascot. But when we started the work on his image, our artist came up with this three-tailed and three-eyed thing and we decided that Levi deserves to be more than just one cat of Ulthar. He’s neither good nor evil, he has his own goals and he’s definitely not just an animal. Maybe someday we will decide to tell his own story on an album – who knows. But he has a lot of skeletons in his closet haha.
And why we decided to make such a mascot… Me and Arilan are true cat-lovers. And the other guys are animal lovers too. I have two cats (one was adopted from a shelter, the other one was found on the street) and Ari has one – also taken from the street. We also take part in different charity activities for the animals and animal shelters (not as musicians of course – we are not that big. So we are just helping some shelters with animal food and money and reposts on social media). So in this case we can say that Levi symbolizes our love to animals and nature. And please notice – he’s not a mascot like Eddie, or Vic Rattlehead. He’s not in the centre of everyone’s attention. He has a lot of cat’s nature so you can find him almost on every cover artwork starting from the ‘Hellbound’ single… But sometimes it will be not that easy. So our fan club enjoys this ‘Let’s find a cat’ game every time.

You have cooperated with some renowned musicians such as Steve ´Skinny´ Felton, Lindsay Schoolcraft, Bazie 69 or Daniel Finch. Which cooperation did you enjoy most?

Viper: Each and every of them. These guys are extremely talented, they are brilliant musicians and songwriters, and it was a great honour and a privilege to work on some of our songs with them. To say more – some of them are my good friends and we usually have some good time when they come to Moscow.

Is there anyone else you would like to cooperate with in the future?

Viper: Another tough question. I have a lot of ideas and dreams lol. It would be great to do a song with such amazing guys as Chris Harms or Fernando Ribeiro. But the biggest dream personally for me (and let’s be honest – I’m almost sure it will never come true) is to have Bruce Dickinson on a record.

What are you guys currently working on? Do you already have any new ideas for your next album?

Viper: Not just ideas. We have the whole record done… Almost. We are currently finalizing the work on the sound and if everything goes as it’s planned, we will release ‘Dawn of the new Day’ in February – March. This album has a fantastic backstory inspired by Philip K. Dick books, the Matrix and Event Horizon movies, Cyberpunk 2077 video game and even has some easter eggs. I really can’t wait to release this record cause in my opinion it is awesome.

The pandemic of coronavirus has had many negative consequences also for musicians and their fans. How has it influenced your life? Are you planning any concerts for this year or maybe some online events instead?

Viper: Yeah this pandemic has broken a lot of plans – we have had to postpone and later to cancel our Asian/Australian tour planned for 2020 and it has turned out to a weird situation that Above the Stars have played only TWO live shows – we supported Norwegian black metal legends Mayhem in Moscow and St. Petersburg in January 2020. The scheduled Moscow show with Emperor was postponed for three times already and the whole situation doesn’t seem to get better at all. So we have decided to focus on new material and music videos… And yes we are planning to do a free online show this spring – in the end the new album has to be presented to public.

Do you have a final message for our readers?

Viper: Once again – Happy new Year to you guys! Wish you all the best and hope that this new 2022 year will be better than the previous one. Stay safe!

Viper: Thank you for having me.