Hi, please, introduce us with Grimner and your role in the band. When was the band established? Where are you from exactly? How is your pathway and which releases have you already published?

Hi! My name is Ted, lead guitarist and vocalist. The others in the band are Marcus (rhythm guitars and vocals), David (bass), Koff (keyboards), Johan (flutes, mandola and bagpipes) and Henry (drums). Although, for the upcoming shows in the Czech Republic, we will have a stand-in flute player with us called Kristofer, instead of Johan.
Grimner started out in 2008 in Motala, Sweden. Henry and I started it pretty much directly after our previous band, which played some kind of melodic death metal. The two of us felt that we wanted to play something different, which wasn’t popular with the other guys in the band at the time, so we split up. We then recruited some other musicians, and after a few line-up changes we now have a really strong group. We have released three EPs and two full-length albums since then: A Call For Battle (EP 2010), Färd (EP 2012), Blodshymner (2014), De Kom Från Norr (Acoustic EP 2015) and Frost Mot Eld (2016).

What is your style? How do their shows look like, what can Czech fans expect from you?

We usually say that we play folk metal, of the Norse/viking variety. You can always expect an energetic and engaging show from us, that’s for certain. We always give 110% on stage, and the upcoming tour will be no different. 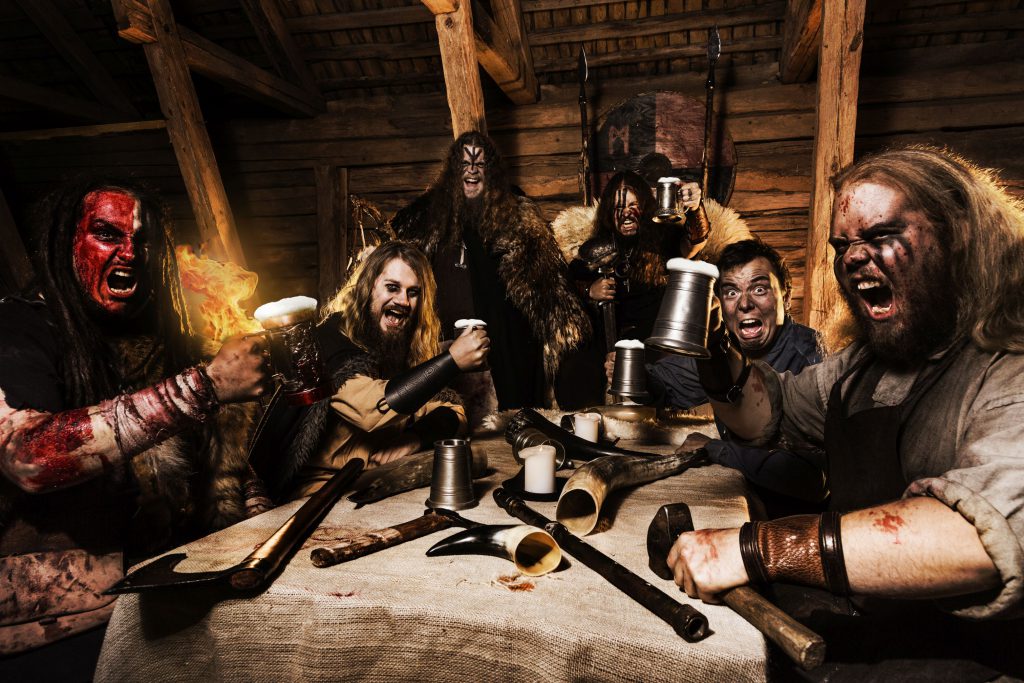 You are playing outside Sweden quite often. Was it hard to find your way behind the borders of your land? What helped you in that?

It was difficult to begin with, yes. The trickiest thing was that in the beginning, we didn’t have much live footage to show, so it was hard to show that we are worth booking. Also, we have grown very much as both stage performers and musicians, so the general quality of the band has improved immensely since our early years. We have gotten awesome responses from audiences and great reviews on our shows as well, and our record label Despotz Records have also been of great help, so it’s a whole bunch of things that have made it easier for us to play internationally.

Can you compare other European concerts and festivals with Swedish ones? Which are the biggest differences (of any kind), what is similar?

The biggest difference may be that there seems to be more festivals that support our style of music in the rest of Europe. Sure, we have a lot of metal and rock festivals in Sweden, but people still have not really warmed up to the idea of combining metal and folk music. It is much more appreciated when we go further south from here. Other than that, I don’t think there are too many differences.

Do you like touring across Europe, going these long ways?

Oh yes, we love being on the road. It’s hard work and it takes a toll, but it’s all worth it to play the music we love in front of both new and old fans. We are always working towards being able to do progressively longer tours.
Which your concert made the biggest impression on you and how?

Personally, I think that was Hörnerfest 2016 in Germany, so far. We played pretty early on the second day of the festival, and didn’t expect too much since it was so early in the day. However, when we had finished our soundcheck we noticed that the place was pretty much packed with people who had come to watch us play. So we did the show, and it was absolutely crazy and awesome, people in the front even sang along even though our songs are in Swedish. That’s when we really realized how far we’ve come since the start.

Do you have some funny stories from your journeys? Can you share the best one with us? 🙂

Not sure what would be the funniest, but during the Frost Mot Eld tour last year we had our friends in Vanaheim as support act, and we conveniently stayed at their guitarists place. We also had Stáilinn Drakk as support band, and this has to do with their keyboardist, who is dressed as a wizard, with a robe and pointy hat covered in stars and moons. So anyway, we’re driving back after one of the shows, and we get a call from the other bands saying they are having problems with the van, so they will be a little late getting back. So since we can’t get in without them, we stand around outside the guitarist’s home waiting for them. We were expecting them to take, like, half an hour or so, but suddenly we hear sounds of someone vomiting in the bushes behind us. We turn around, and there stands a fully robed and drunk wizard, bent over the bushes. “Hey dudes!”, to which we say, “You alright there, Merlin?”. “Yeeeaahh!”, or something to that effect. We just never thought we would see a wise sorcerer puking in a driveway, but he proved us wrong. I’m sure he won’t mind me telling this, he’s happily told incredible stories about himself.

Do you know anything about Czech metal scene? Some bands? Do you have some friends here? Is there something, what you are looking forward to seeing in Czechia?

I personally don’t know too much, unfortunately. David introduced us to Malignant Tumour from Ostrava though, and I think they’re pretty great.
We are actually planning to take a detour and check out the bone church in Sedlec, which we’re looking forward to. We also of course look forward to visit some pubs in Prague if we have the time, since the beer culture in Czechia is almost legendary. But most of all we look forward to playing our shows and meeting people.

What is your ambition and dream? Your target as Grimner?

Our goal is to take the band as far as it can go, hopefully doing it full time one day so that we can do really long tours and play all over the world. This is what we love to do, so it would be a dream to have as few limitations as possible regarding touring.

Thank you for the interview. Anything you still want to say to the Czech fans? 🙂

Thank you too, a pleasure! We just want to say that we can’t wait to see you all in a couple of weeks and give you everything we’ve got on stage, and drink throughout the night. Prepare for battle!