An Early Ticket Can Be A Blessing!

My odd question runs deep once more or actually the replies to it. Dorian Grey once more. We’re discussing the story to get into the actual story again. “Could you destroy it? And if so at which time could be strong enough to resist and destroy it?” He frowns and thinks. “I never really think about life in that way.”

“The more interesting it is”, I point out. “At this point I am living every moment with the thought I’m never gonna get the chance to do it again. So everything is lived up to the upmost positive point way. Because you only get one chance.”

“Which means the end defines the chance.” – “Yeah, you gotta be aware of that everything comes to an end. I’ve been saying it every night. Every day above ground is a good day. I mean that’s the bottom line. That’s tomorrow … I mean life can take a left turn in a split second and it’s: you done!” 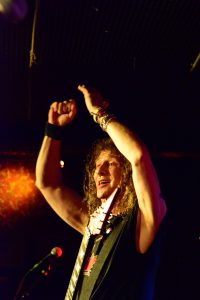 “Definitely.” – “You know people get sick. People get heart attacks. People get cancer. We’re vulnerable! We don’t realize it. You don’t realize it when you’re in your 20s. That’s something that comes later. That’s why older people have wisdom. It’s not necessarily wisdom. They become aware of their mortality. And when you become aware of your mortality THEN you get the wisdom ‘I better be happy with every moment because they’re running out.

“Definitely. They do. Yeah.” – “When you start realizing that you’re really on a clock, you honour … you really honour ….”

I sigh. In a way I wish it was this way. But then learning it earlier – as hard as it then (usually coming along with heavy darkness) – might enable you to live it really up. We speak of such teaching moments in live. “It doesn’t matter when it happens. But be sure one thing: It’s gonna happen.”

“Yeah.” – “And that’s it. You know can look at things in a lot of different ways. I was, of course, when my father passed away, he didn’t pass away at a young age. He passed away at 83. But he was in top physical condition. And of fluke kind of death. You know something happened to him that one in a million times happen. It took him out quick.” He snips his fingers. “And as time went on other things happened within the family and you go on he is lucky he is dead.”

I nod as I can easily think of what he might mean. “You know there are things about you get an early ticket. But sometimes that early ticket is more of a blessing than it was a curse.”  – “Can be.” – “Life is really weird that way. You know. Sometimes the curse is living long, too.” – “It is.”— “Because in living long you see things you didn’t want to see.” – “Yeah.” – “You know I could talk about it in a sense that my mother lived long enough to see my older brother die. Right. My dad didn’t. So in a certain sense, my dad got lucky.” – Agreed. “Because what my mother had to live through to see that happen. I don’t know if my dad would have been able to handle that. That would have killed him! Never mind other things that happened that both of them missed. That my older brother also missed.”

The Loneliness of a Long Life

I agree. “You know what, it’s ok, man because you didn’t see that. That’s all ok. But some of the stuff that my mother had to live through really made me think. She lived to 93 and someone in their 90s you got to know how lonely this is. Yeah I got the long life and everybody things that a long life is such a wonderful thing. You realize the loneliness. I sit here and I think of it all my friends are dead. My younger sister is dead. You know what’s that like to live with? And my mother asked me these questions. And you know what you never think about that. You don’t think about that. So is an early ticket a bad thing? No. Not necessarily.”

“No.” – “It’s what I’m saying in every day that you got enjoy to the fullest, live your life to the fullest. That’s ultimately what we all have to do. No matter when your number is up just make sure you live every moment the happiest and the fullest that you can. It’s all about this. For everybody.”

„I am so grateful and it literally was my honour meeting you“, I say but humble Lips, he just laughs in a hiding manner. 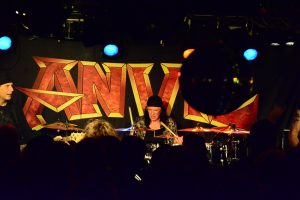 The support bands did a good job and the crowd was plenty. But when Lips, Rob and Chris entered stage the real party began. The first song, an instrumental – it was celebrated like a ceremony. A ceremony taking place amidst the audience, as after a few seconds Lips would take his guitar all the way into the beating heart of the crowd. Inaccessible he said metal is. But, Steve “Lips” Kudlow is quite the opposite. What I liked most is that the crowd was well mixed. Yes, there were quite many fans from the early years. But there was also a remarkable share of young metal heads, even teenagers in rather new thrash vests honouring the legendary Anvil with excessive head-banging and defending their front row spots passionately. The spirit of metal is very alive and the old school styles – straight and honest – they rise to make a counterweight to the highly technical, orchestrated and complex styles that have dominated lately.

There’s no way to deny that I’ve met quite numerous, very interesting personalities among my interviewees so far. But no one exceeds Lips’ super optimistic ability to view his own life from every thinkable and yet take for the judgement only the most positive into account. This rather small and slender man, with his dear and ever laughing eyes, he is a great one. He is a legend. 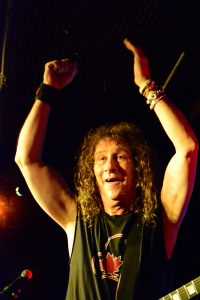