Back in summer I met a cool new band full of energy, passion and ambition. Post Pulse had just released their first album – great, straightaway and honest to the bone, groovy stuff – and where full of plans. 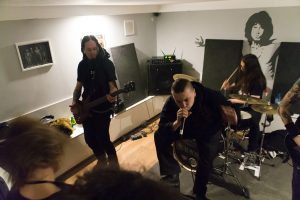 They had played a couple of shows in autumn and winter before they started off for their first tour abroad in Czech Republic, Slovakia, and Poland. Only one or two days before they set sail I heard Sam, their most charismatic bass player felt severely ill. Just returned from the hospital they started touring, including Sam, of course. Now that they have returned home I was curious as hell to hear about their tour experience! I met Sam online in our lunch break (now that is the cool side of being in actual contact with the musicians …)

„Now that you’re back, what is your bottom line of the first ever Post Pulse tour abroad?“ – “At first I was really disappointed in myself because I ended up in the hospital only a week prior to the tour starting with an infection on the nerve between my ear and the equilibrium. This cause some pretty bad vertigo and only 4 days before the tour I was still unable to stand. So my performance for the first few shows wasn’t what I practiced for. By the end of the tour I was jumping off the stage and playing bass in the mosh pit, so I think I healed quite well. Metal can be great physical therapy you know?! Other than myself, the guys played great on the gigs and it was clear the audience responded well to our music. No one knew who we were coming in to these cities and by the end of our sets we had new friends and fans.  I think it was a really successful tour.”

„First of all I am happy to hear it went out that well because I noticed you were starting off ill and … yeah. But as you said, it ended great. Making friends on tour is something I think really cool and that is – I think – more likely as long as you’re not that popular. Would you agree?“ – “Making friends on the road is absolutely the best part about touring.  Meeting the people in each city who come out to throw down with us and then tell us all kinds of interesting things about their lives and their city … it’s just amazing how people open up to you after you share some beautiful music together! I think it’s quite easy to make friends with other metal heads on the road if that’s something you want to do as a band, and for Post Pulse, we love being social.” 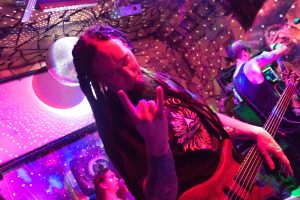 ‚I know‘, I think with a frown. „Indeed. I mean I think I got in touch with first bands because of a metal head met has 20 years plus connections to Finnish bands.“ “Well you are a perfect example of what I’m talking about.  We met through metal, and we keep in touch because of metal, and here we are talking more about metal!  Isn’t metal an amazing thing that brings people from all walks of life together on common ground?  It’s pretty awesome!” – “Oh it is. I love the community for its open minds and hearts!”

„I really loved and enjoyed when we met in summer the great atmosphere among you guys. But then touring can be challenging as you stick together so closely and have several kinds of pressure to deal with. Are you all in for the next tour?“ – “Post Pulse as a band learned a lot on this tour.  It was 11 days long and we didn’t get annoyed with each other even for one second.  We are a group of guys with the same sense of humor and similar work ethic.  We all work hard and take our roles and responsibilities seriously at the gigs.  I think we also have a serious amount of respect for each other and for the art we are showcasing on the stage.  That equality in the work and mutual respect for the craft make touring very easy… and when you can laugh at the same stuff it makes the touring really fun.

There are some really hard parts about touring and I think we did well not only as Post Pulse, but as the Death Pulse Tour with Death Design. Post Pulse is only 4 guys, we toured with a total of 9. There was a huge potential for cultural disaster. It was great that every person in the car got along so well, even when our psychotic Slovakian driver (I should call him brother now) put on Taylor Swift … We didn’t kill him!” – „You guys are so peaceful and merciful … suffering from such torture without revenge“ 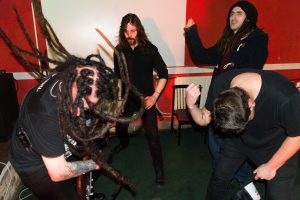 „How did you like the venues? You might remmber that I love the small clubs with a bit of rehearsal room feeling. Did you meet your audience eye to eye – literally spoken? And what was the support at the venues like? Like in the old storie of drunken sound guys and so?“ – “Most of the venues were exactly the right size for a band like Post Pulse, intimate settings but with the right amount of audience to fit the rooms. There were some adventures along the way of course, but I think the weirdest venue we played was also one of the best shows of the tour.  We played in a coffee shop in Gliwice, Poland that we were not looking forward to at all after seeing the pictures online.  We figured we would just go in there, tear the place apart, drink a latte and get the fuck out. When we arrived we learned there was no sound guy at all and we were all thinking, „okay, here we go.“ But what actually ended up happening is we did our own sound, the small audience threw down super hard, and the owner of the venue treated us so well, that the whole thing felt like an awesome party.  We ended up hanging out there for many hours just because we liked the place and our new friends so much.  It goes to show you that you shouldn’t judge a book by it’s cover… or a venue by it’s caffeinated menu options…”

„Oh dear. You are so brutal guys. I mean, hell, what have you guys done to the poor little stereotypes people adore. A metal head is considered to get hit on the venue and you even go touring as a recovery journey! Then metal heads are meant to be drinking, fighting and partying lazy and all you tell me is that you had fun working, a hell of a good time with new people from foreign countries and even took their attempts to torture you all with a smile?!“ – “I think it was a great time all around. We need to perform live metal. This is what Post Pulse does best. We live for the stage. So taking that show on the road, even as small as we are, was positive from the work it took to do it, the pain we went through in the process, and the results of that effort.

„Did you come upon new inspiration perhaps due the close contact with Death … ? Death Design, sorry.“ – “I think we will remain friends with the DD guys for a long time.  We’ve now had an adventure together and it was the first tour for both bands so it’s something that will stay with us… part of the legacy of both groups.” 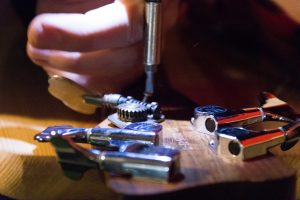 “What was the most critical (meaning important) lesson you learned on this tour?“ – “The most critical lesson I learned on tour is that I need to bring a lot of extra gear with me because I broke so much of my bass equipment I almost couldn’t play shows.  The strap lock broke in half and I had to use duct tape to hold the strap on the bass for the last three shows.  The tuning machine broke when I fell down in the mosh pit (shattered my thumb nail in the process) and luckily the owner of the venue in the next place had a bass I could rip some parts out of to fix it.  There were a lot of painful moments for the gear and we weren’t really prepared to fix anything easily.  That’s probably the biggest learning for me on this trip.”

„Ooh… Sounds tough and explains all the extra gear on the venues… How about the new album (coming to an end slowly)? I remember you said in summer already you could start quite immediately. Don’t you drown in songs now? Or will you try do play more shows before recording again? Plans for the summer?“ – “There are some things in the works that we can’t talk about officially just yet but I can let you know there will be some new material available pretty soon! You’re right we have been drowning in new material and we’re still really inspired to do more. As a smaller band it can be difficult to get some recordings done when you write as much material as we do, but we’re doing our best to get some new stuff to blast out to the world!”

„So I am very much looking forward for the new material and even more for some shows soon 🙂 Thank you for taking the time :-)“ – “Thank you Katja!  Your support for Post Pulse is very much appreciated and we’re so grateful that you take the time and energy to talk about us. And thanks to obscuro.cz for supporting underground bands like Post Pulse. It goes a long way for bands like us!”

Personally, to me there is no category called underground in terms of commercial or media value of a band. If there is such thing as underground in music, it is about a more independent music style and the freedom to be more experimental. There is pressure from commercial interests of media (selling by adverts) and the labels (needing to make cash flow, of course). But I am free of this.

„Any message or greetings to your friends back at the tour, perhaps in Czech Republic in particular?“ – “For our new friends in CZ, I would especially like to you guys who threw down hard with Post Pulse in Prague, Aś and Ostrava. You beautiful metal heads made us feel really special and we can’t thank you enough for the great time we had. We will definitely be back as soon as possible!”

Sam kindly to provide some photos from the tour! Thank you again, Sam Roon, Post Pulse!