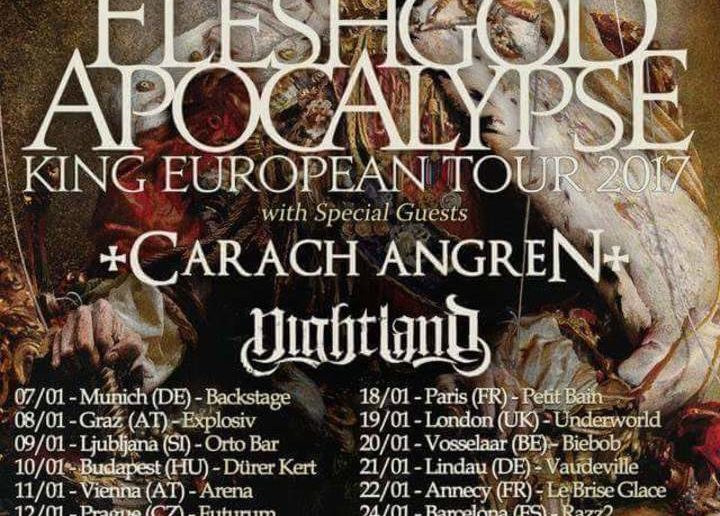 The Evening of January 12th full of symphonic metal started after 7 p.m. in Rock Cafe in the center of Prague.
The line-up included three bands – Nightland, Carach Angren and the headliner Fleshgod Apocalypse.
I must admit I was looking forward to this occasion for more than a month. The evening was finally here and I arrived in Rock Café. It was the first time I was there and I was quite suprised. The relatively small music hall was comfortable with pleasant environment.

The thankless role of the first band belonged to the symphonic death metal band called Nightland who took their difficult role proudly. As soon as I heard first tones of their first song I was completely sure that these impressive guys will find special place in my heart. Relentless guitar riffs mixed together with orchestral elements and vocals of all guitarists provided great music experience. Not just for me, but I‘m sure also for the whole audience. I had known only a few songs from their latest album „Obsession“ before the concert, but seeing them live was much better. Especially „Alfa Et Omega“ or „Icarus“ sounded in its full glory. The whole appereance was even better with their impressive costumes. The choreography wasn´t exaggerated and they reached maximum with only minimalistic gestures. Also the sound was very good and every single element of their music sounded exactly as it was supposed to. The whole performance was in dark and mystic atmosphere. However, it‘s a shame that club wasn´t full yet. Undoubtly, this band definitely deserved more fans attention. I wish them good luck in the future and I look forward to hearing them again soon.

The second performance belonged to the only black metal band of the night, Carach Angren. My feeling of that part of the concert might be different from the rest of audience because I am not very keen on black metal. They didn´t impress me much and seemed too much theatrical to me. The music hall had been already full of people who enjoyed their music a lot. Musically, there was nothing to criticize. The music wasn´t bad at all and I didn‘t find other negatives.

Then, Fleshgod Apocalypse finally came. To the great success, I got into the front row and I saw the whole backround including a table with a book and bottle of wine. There was a piano with candles in the corner. The club was almost full and we were eagerly waiting while the „Little Night Music“ played. Baroque classical death metal parade could begin. I was expecting a lot but it was even better. After the intro „Marche Royale“, Fleshgod Apocalypse plunged into the stage with power which could destroy whole army and they started to play „In Aeternum“. It was almost unbeliveable what they could do on such a small stage. Their music absorbed me and didn’t release me till the end. There wasn´t enough space for mosh pit, but, don´t ask me how, it was for wall of death.
Mostly, the setlist included songs from their latest album „King“ which had been released in the beginning of last year. Their oldest stuff also hadn´t been forgotten, they played their greatest hits like „Pathfinder“ or „The Violation“. The Italians didn´t spare anybody and they gave their all. I praise the sound masters again, they did great work except one really short part, when the vocals got lost. But in my opinion, making good sound for FA must be really challenging. When the last song ended, I was standing for a while, speechless, and I tried to absorb this whole thing.

To sum it up, it was the best club concert I’ve recently been to. Great atmosphere, great sound and even better music, it was all there. So I left with immersive experience.