Inconspicuously creative, that might be the characterization of the third album of Austrian Ashes of Moon which was released in March of this year. Ashes of Moon turned to melodic calmness and it was an excellent choice. The calm EP ‘Melting Away’ is one of those albums that gets under your skin and stays in your discography as the stable element you play in the evening.

The four-men band was founded in 2009 in Styrian Bruck an der Mur. It was inspired by classic rock mixed with admiration of the Scandinavian melodic metal. This admiration has shown from the very beginning. The first full-length album ‘Ashes of Moon’ was based on classical melodeath sound and thus didn’t differ much from other beginning melodeath bands. Nevertheless, the band wasn’t uninteresting for the talent seekers. There was this something.

Of course, one can hear a lot of influences on the first album. For me, the most significant, hearable influences were Omnium Gatherum and Insomnium but… there was this hard-to-define added value which provides such projects with hope to find their own face. Ashes of Moon were strong in guitar riffs and they were drawn to slowness and ease in almost funeral doom style of vocalist Matthias ‘Hias’ Fibrich. I thought this band would play great doom metal. However, Ashes of Moon chose a different path. 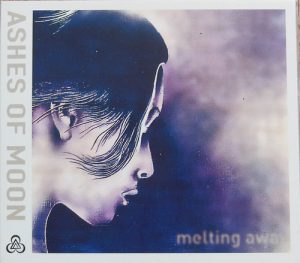 In 2014, the band released the new album ‘The Darkness Where the Past Lay Sleeping’ and showed how much a band can move in style. The Austrians found their strength and based their music on this strong element. The second album featured a lot of acoustic guitars, distinctive growl and parts which didn’t sound like typical melodeath. The second album was a level higher than the first one and Ashes of Moon got a distinctive music character.

I’m listening to the last album, EP ‘Melting Away’ now and I feel quite happy about it, for it’s really nice to hear something this excellent with the feeling of satisfaction of the talent seeker who didn’t wave an unknown band resembling of many other bands aside. That something has grown in the sound of Ashes of Moon.

So, what has always been the most distinctive feature of the band? I suppose it would be the stillness, which suited the band well. Ashes of Moon is not a formation of predators, who would elbow their way to the front, they don’t scream their pain and anger. Deep inside there is an absolute harmony in this music. While I thought they might choose the doom way, they found themselves a path of post-rock and ambient metal. They found the exact line between the passion for melodeath and showing their tendencies to emotional harmony. They shifted their instrumentation to the past and let it sound like old rock tape. The vocals are less dominant now, which makes the music even more well-balanced.

Mario ‘Luis’ Schreiber is a guitar mage, conjuring small musical miracles and I must admit, he bewitched me. He is another piece in my collection of guitarists who performs excellent riffs without showing up. I would like to write that the album is Luis’ big solo but I’m afraid that the rest of the band would declare a war on me. Still, this musician of black metal origins has my admiration especially for those minimalistic parts requiring a close and careful listening.

I shouldn’t omit the rhythmical guitar, which gives Luis the space to shine. Michael ‘Mich’ Sägmüller is a very precise in rhythms and the sound he creates is a very pleasant one. Both Ashes of Moon’s guitarists are doing their job with perfection and joy. And not mentioning a drummer Daniel ‘Haunz’ Haberl would be almost a sin. He is one of the drummers who stays in shadows, doesn’t need any personal fan club and respects the others.

Ashes of Moon has grown and became an excellent, mature band. ‘Melting Away’ is an album, which got really high on my personal scale. It’s an excellent music performed by the lads from the neighbourhood. Austria is not far from the Czech Republic, so you can easily get to one of their concerts. I hope, I’ll hear their live show soon. I have only one critical comment but a pretty sharp one. Four tracks? Why only four? Why not ten? Now I have to play it over and over again…