Review: Warbringer – Voe to the Vanquished

The Californian band called Warbringer is a band that is slowly getting known by the metal fans. Throughout the time their style has been formed and changed. On their first album they had tried too much to be like the old thrash legends, which does not really suit me. But in the last few years they have found their own way to combine the old school thrash with the modern one, and that aroused my interest. Moreover, as the title of the band is telling us, their music is military themed which makes them more identifying. And we can definitely savor that on the new album “Woe To The Vanquished” 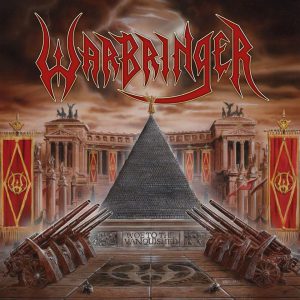 The album is opened by the song named “Silhouettes”, where we can hear the wind as it’s howling across the bare fields, where nothing is left but shadows and silhouettes, with John’s screaming that underlines the hopelessness of the whole scenery. The title “Woe To The Vanquished” is a massive song standing on a mighty bass and a central guitar riff proclaiming a clear message – Woe to the vanquished. After the typical thrash, a tense song comes “Remain Violent” with dancing rhythm, regular screams and a catchy refrain, you’re gonna sing along right after the second hearing. And here comes the single “Shellfire”, which we already had the chance to hear few months ago. Warbringer themselves said that this is an attempt at the fastest song they have. Which it really is – harsh fire of riffs, which pulls you onto the battlefield, into a shootout between machine gun drums and guitar-tommy gun.  On top of it we can hear John’s voice oscillate between mighty scream and high pitched yelling which almost raises anxiety. “Descending Blade” drags you in at the beginning and throws you out at the very end, while you will not have a chance to take a breath. Typical thrash figures, guitar solos and with that goes hand in hand melodic line of the frontman. “Spectral Asylum” is a complete surprise for me. Slow whopper that extends itself in disgusting darkness, between the worlds of the living and the dead, so it graduates to a harsher interlude, but still keeps the atmosphere of the tangibility of the death, which is hanging over the battlefield. “Divinity of Flesh” is a little bit deathmetal-ish. Quick drums, yelling guitars and extremely high pitched voice of the singer are gonna give your ears a massage. And here comes the last eleven minutes long song “When The Guns Fell Silent”. The song that is telling the story but not just by the words but especially by the music.

To sum it up, the new Warbringer album is a really nice surprise for me. Not just because of the music, which is technically very good, but also because of the whole atmosphere that makes you dive into it and enjoy it as a whole thing. It’s very likely that one day I’m gonna find songs that I’m gonna like and songs that I’m gonna skip, but for now the “Voe To The Vanquished” is something I have to listen to from the first song to the last one.