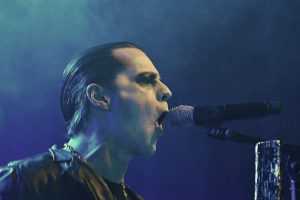 The crowd on metal concerts has changed. And even with Black Metal icons SATYRICON on stage you will find lots of guys and girls in regular jeans and shirts, simply hairdos and just like that make ups. Even Black Metal has left the sole shores of underground and arrived in the middle among us.

The stage set up is simple and leaves plenty of space for the musicians to fill with their energy, passion and moves. In the background a huge screen showing the Edvard Munch‘s sketch „The Kiss of Death“ (1899) that Satyricon made their cover art of „Deep Calleth upon Deep“ dominates the stage set up in its simplicity. But then it is only waiting patiently to unleash its magic during the show later.

The tension rises and the crowd reveals being loyal fans by heart of the masters of darkest moods from the North – despite their burgeois outfits. The opening intro is full of speed and energy as are many of the intros throughout the near two-hours show. Slower or even ultra slow passages follow, a contrast that seems harsh and disharmonic by nature. But just like the contrast of darkness and light this makes the atmosphere and harmony. It is combined with chorals and massive riffs and soundwalls and, of course, the most charismatic voice of Satyr. While earlier his vocals tend to be much harsher tonight he chose to show the slightly cleaner range of his spectrum. With his bariton leaking through more he massively adds to a even to some extend spiritual atmosphere. The sound is superb tonight, as long-time fans I meet, confirm. 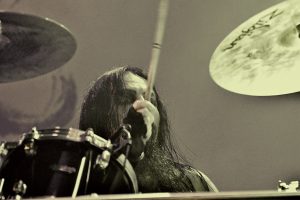 But let’s get back to the visual side of this neatly arranged show. A simple biker leather jacket closed to the neck and dark pants, hair combed back and eyes not too much shaded – that’s all Satyr takes as a outfit fitting perfectly in the simplicity of the stage set up. Among the classical metal-head styled instrumentalists around him, he has a bit of a stranger in his own band (of live musicians). It is the light on Munch’s masterpiece that makes the creepy, magical effect. With the changing light in colour, angle and intensity the facial expression of the portrait changes. Creepy enough to know the actual image does not, once in a while the beautiful face looks sad, aggressive, slightly smiling or serious, a bit depressive or blank.

There is more magic working. It’s the composition of dark and heavy keyboard passages with lots of sounds from industrial noise plus the early Dave-Gahan-like outfit that add to a memory to early 80s New Wave times packed in a coat of Black Metal guitars and drums. While the instrumentalists bang with all their passion, Satyr underlines the slower parts of the music with few but neatly set, hardly metal rites fitting moves, even adding some mechanistic elements which add to the Industrial and New Wave motives. 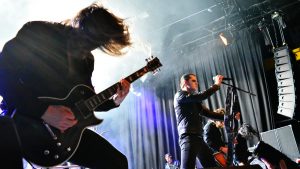 „I wished they had played more recent songs“, I hear. And this one goes on: „It might be weird, mostly fans wish it the other way round. But they had maybe three or four from the recent album and all the rest seems to be the same set up I heard, I think it might be about eight years back by now.“ I see the point in this. But then the crowd loves classics such as „K.I.N.G.„. „The benefit from an all-time low in life is that you can write great music“, Satyr explains in his charismatic even somehow disturbing voice introducing „Now, Diabolical“.
Personally, I do very much like their project with the Norwegian National Opera Chorus. And I can sense the spirit of this project still tonight in a many of their songs. It’s finest art, a complex network of speed and abrupt breaks into slow, from heavy to lighter emotions but always filled with meaning precisely delievered to the crowd. „They did it right – everything“, another tells me between two songs and just before drifting back into the rhythm of darkness.

The show lasts about two hours and exceeds the by far nowadays too wide spread standard format of 75 minutes remarkably. Still I hear complaints that earlier sets were even longer. I am happy to see that Satyricon fight their corner doing shows deviating from the set-rules.

In the final period of the show the band aligns at stage before playing some last songs. Frost – his looks meet far more classical Black Maetal standards – leaves his kit and joins the line. His haggard shape, his black hair and beard supported by the bright yet black shaded eyes make up to a threat. Never underestimate the power and strength of a person, I think while his right foot hammers on the stage floor fuelling the cheering crowd. And the crowd obeys the master. His hits resemble a wave of thunders echoing through the hall. A creepy moment. Intense. And goosebumpy. Magic thundering from a single foot hammering on the stage floor.

The final good bye is just as understating as the stage set up and as the screen in the back not missing to hit the heart of the crowd. Once they bow. Otherwise the band stands and waits. Cheers. Stares. And leaves. Good night.

Speaking of it with the aforementioned fans again, one says: „Yeah, I have always liked these Dark Wave elements in their music“, while another one points out: „It has a an aura of Gentleman Black Metal.“ And this sums up perfectly and in every detail the elegance of the show shifting the focus on the highly diverse yet dark as hell music.
(Show: Frankfurt, Germany, March 13th, 2018, photos: Ms Cesar Little) 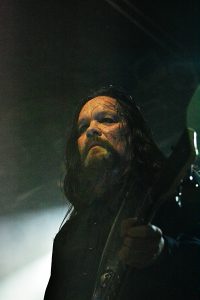 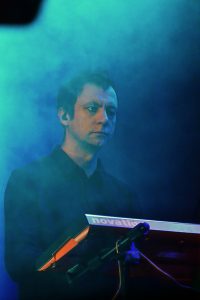 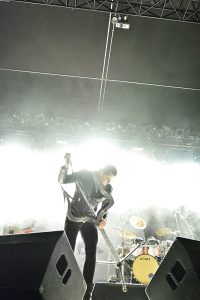 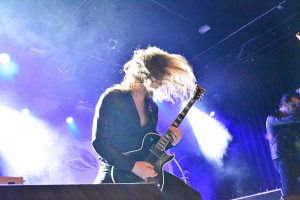 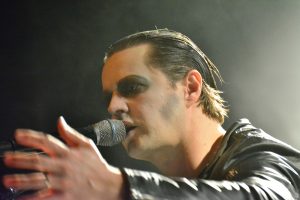