The magical Beast in Black unleashed

The sounds of Judas Priest’s „Night Crawler“ introduce a roar exploding from the throats of Mate Molnar (bass) and Anton Kabanen (guitar) „Berserkerrrrrr“ unleashes the Beasts in Black! The Greek master bard Yannis Papadopoulos hushes only little later the obvious: „the Beast is back“!

But lets go back in time by perhaps by an hour or two because my personal Beast in Black concert experience started with an remarkable encounter or less pathetic a cup of coffee and a decent conversation with Anton (Kabanen). „When could we make the interview?“ – „Now?“ he asks carefully.

Most appreciatively, he suggests to leave the noisy back stage so we end up in a rather quiet spot at the nearby Moroccan bar. He grabbed a coffee (yeah, true Finn) and me a traditional mint tea (amazing, don’t miss to try yourself!). No, I’m not going into details here, but after roughly 40 minutes when he was about to leave he dropped the info that tonight’s show was sold out. Wow! Second show on the tour and already sold out.

Later at the venue: When I hear the familiar guitars scream, I am still in the hallway and start hurrying towards the point of interest: the stage with five Beasts in Black proving their passion for their music. Yannis Papadopoulos (Mr Dangerous Eyes – and he makes excessive use of them) yells the „Beast in Black“ alive and Anton, Kasperi (Heikkinen) and Mate (Molnar) elicit their (bass) guitars the vibes synthi-ish, most powerful metal. 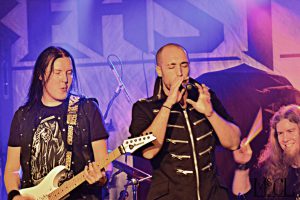 Most likely most of the audience had not heard of the Beast in Black before. But as the crowd entered the Beast’s natural habitat and hunting grounds, be sure: they won’t forget about them! They are enchanted by Yannis‘ expressive and most capturing show. He who orchestras the crowd like a wizard through the „Eternal Fire“, and makes „The Fifth Angel“ steal their sanity. The stage clearly is the band’s paradise. And as the club (Colos-Saal in Aschaffenburg) is cosy, it is simply perfect for intimate shows – you are kind of among the Beasts on stage.

The Beast in Black roars and the crowd follows its lead cheering, banging and willingly. „Born Again“ from the hot, loud and fiery riff machinery the Beast’s heartbeat comes from the incredible Atte Palokangas. You never know if his everlasting stage smiles is a window leading to his deepest passion for his drums or is the genius’s insanity lurking out attracted from the presence of the other four Beasts.

I can’t hide my enthusiasm for Yannis. The eyes. The voice. The show. Apparently the Beast-Master has turned me into a loyal servant already. He is the perfect front man. And while the crowd is rubbing eyes in disbelief of the female voice on stage when all they see is Yannis mesmerizing us all in „Blind and Frozen“ Beast-in-Black disciples. 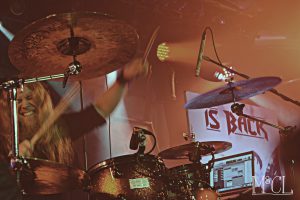 Far too soon the „End of the World“ announces the end of their show. But the Beast’s catchy tunes and slightly choreographed, yet still natural show will haunt our dreams and eardrums for weeks. The final song is once more bursting with energy and passion leaving the audience incapable to avoid the spell of the rhythm. It has sneaked its way into the metal heads‘ hearts already and will do just alike in the shows to come.

No offense to Kobra and the Lotus or Beyond the Black – but the opening gig was the night’s highlight.