The rumour says, alcohol is very expensive in the North of Europe. And yes it is. As music festivals are considered several days lasting parties – and Nummirock is the most traditional example for this rather than an exception – the supplies as well as the accessibility of alcohol in each situation of the festival is an essential matter to be carefully considered and if possible improved. I frankly admit when asking the band for festival gadgets my first idea was some stage equipment, but that of course, would be quickly discussed and could not provide sufficient space for innovation and creativity. The one and only true kings followed a kind of holistic approach to improve. 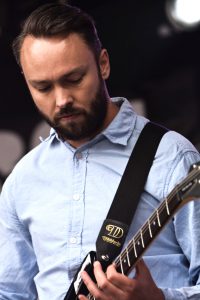 So I can come up with a more music-related question – or at least I think so – suggesting that such hipsters will be equipped with the best and latest only. “Which is the gadget one needs to have during the festival season this year?” –“Booze!” is the instant reaction. “Flame throwery is a new invention”, the vocal king says, “no, booze is kind of old. I think this festival something with fire.” — “You know actually, since the festivals in Finland at least have limits what you can do with alcohol and so forth, just widow I guess which is just a few years old, I can’t remember the name of the stuff. It was sort of suit which has a zone into the linen sewed space for a bag of wine. Two litres of wine. And it connects to your cell phone through a tube so you can look like you’re actually talking to someone on the phone.” Up to this moment the vocal king has left me thinking he was focussing on stage gadgets, but … “True, yeah. Right, right!”

Now let me give you an introduction into Finnish festival venues. You have the camping zone(s), of course and you may bring your food and drinks there from your own supplies. Many camps are perfectly equipped with cooling devices (restricted to lake-side camps this might be fueled by natural lake-water-cold, very ecological approach!), sofas and of course cooking devices as coffee is nearly as essential as alcohol.

On the venue you have several zones some of which will be named „k-18“, meaning: no access for under-age audience and alcohol is restricted to these very zones. You can buy it in there, however, you cannot take it away from there. So drinking in front of the stage while your favourite band plays might only work out, if the stage in question has a k-18 area. Otherwise, have a coke or look from somewhere behind the trees and further away. At Nummirock we have the situation that only one out of three stages has a k-18 zone. So the accessibility of alcohol to keep your level while moshing or to refill is either limited or part of a work-out program. That fuels imagination, inventiveness and the ambition to outsmart the security! Obviously.

So Mr Aminoff explains a further advantage of the gadget just discussed: “And it has a pen, so you can look smart as you can take that pen from your pocket and chewing on the pen.” – “I was starting to think of a wet suit which isn’t a wet suit like totally. It has a layer of liquid in it. A wet suit in a skin colour.” They’re starting to get a bit more excited about developing and improving these essential inventions. “A prosthetic dick?” is proposed but fails to attract the attention of the engineers-in-spirit. “Well the Finns aren’t always so smart”, Mr Aminoff describes his fellows, “but when it comes to smuggling booze into a festival, they’re geniuses. People are really, really great inventors when it is about smuggling booze!” The prosthetic idea becomes advanced: “What about a prosthestic hand filled with booze?” Thinking of how to improve human physical features seems to be an approach that requires further consideration: “Yeah I was thinking if you somehow could put under your skin? You could fill your head. There is a lot of empty space in the head”, the vocal king explains and before I can intervene, from behind I hear “especially in our heads!” I am not fully convinced of the practicability: “But then you’ve drank it before!”, I point out and “you can’t drink it anymore.” I feel smart for perhaps one second or until the band points out, that of course it was not meant to be in the blood system by then but only in some kind of stock. The VIP lounge tent has turned into a lab-like place full of inventive energy – extracted from the Chilean red, most likely. “Just between the skin and the bone and the skin and the flesh in silicon pockets, implanted.” I hear an excited “Yeah!!!” “Fill those with booze and makes you look like really muscular!” Mr Aminoff comments. We’re getting deeper into improving physical add-ons for the festival audience.

Before reading on, make sure, any under-age reader is put out of sight. It might spoil the spiritual virginity or bring parents into need of explaining adult behaviour. – Hm, thinking of it, it appears not too unlikely that this need has shown up already anyway.

“Or then your friend having a prosthetic, giant penis which would actually be the friend with the smallest penis, he would have a huge prosthetic penis filled with booze then you could just … well, I don’t know if it is forbidden, to suck dick in public” – no need to mention the rest is not making it without laughing out loudly – “then you could just, when you’re watching Hatesphere, for instance, you could just say ‘Ahhh, I need to suck some dick.’ And some people will ‘Ahhh, that’s disgusting!’ But you would actually be the winner. … “ – “because free booze for that one!”

I feel the need to point out here that, of course political correctness is still highly valued and only temporarily put aside for focussing on the goal to achieve the maximum accessibility of booze on the whole venue.

There are more ideas to come: “You could be the retarded hunchback of Notre Dame. The hunch is actually a prosthetic one and you’re not retarded but …” Mr Aminoff is truly inspired and getting passionate on the idea: “Yesssss, and how about two? Is that …?” — “A camel bag of Notre Dame” While the band still is excited on the core idea, I highlight the positive side effect that as a disabled person you can watch the show from the best spots! “This brings us to what you can do with a wheel chair!” And the vocal king introduces: “Here is our retarded buddy Frank” illustrating this imaginative figure with weird sounds. “And also if your friend doesn’t have this prosthetic penis filled with booze but you still want to kneel down, I think it is still ok“ Mr Langenskiöld ensures me.

We add a geographical level to our creative process: “Or you could actually go to a German festival where you can buy your beer wherever you want to buy your beer.” I suggest the Slovenian Metal Days as there the beer will very cheap. But apparently that’s not the point: “Its not about the cost of the beer. It’s about the accessibility of the beer!” I learn and add, “the Slovenian beer is good and, oh, they have wonderful wine.” — “That’s true”, the king of borga-guitars supports my rating of the Slovenian wine. “So the best tip is actually, if you are saving up for Nummirock or Tuska, to not go to these places, go to twelve German metal festivals and you can bring your own brewery, distillery or …” There is an alternative suggestion, a very Finnish one in my perspective from the guitar king: “Buy a shit load of booze from your local shop, bring it home to you, listen to CDs and drink yourself to death!” – “Yes!” supports the vocalist. “That’s best accessory for this”, the borga-royal bassist sums up. “Yeah, but that’s boring on the other hand, isn’t it?” I say questioning this approach. “Well, after a few bottles of vodka it’s not so boring anymore”, the royal bassist replies. “You can call in your friends”, the Mr Palmén suggests. “You can say that I have vodka in my living room! Even though it’s just you and your cats.” – “I doubt your friends will come if you say ‚I am whacking in my living room‘.”

I consider getting into the booze-into-festival smuggling and mention that I had brought (to the camp) some exotic but most likely vodka of very high quality to Nummirock. That inspires the band to ask two essential questions: how would I come to Kyrgyzs vodka at all and more important: whether I might have one of these prosthetic penises. I was sure that last time I checked I had no penis of any kind. But that would not be sufficient in this science-inspired situation, of course. So they ask me to check again, just to be on the save side, naturally. As not fully unexpectedly the result is still negative, some kind of disappointment runs through the faces – not because of the lack of this organ on a female music editor but the lack of its content (given it was prostethic penis), of course! I need to explain before I am allowed to switch to the next question how I got upon that bottle of Kyrgyzs vodka. Well, it is as easy as buying a BMW: go into a shop – preferably a Kyrgyzs shop – and buy it there. That provokes the question why I was going to Kyrgyzstan. “Adventure, of course”, I reply and this satisfies the curiosity.

Read next and last: Bob Malmström and heroeism: Batman, Spiderman and elephants.

You haven’t read part 2? –  „Bob Malmström and the essentials of borgacore life (pt 2)“