Bob Malmström on superheroes and elephants

Discussing the superheroes‘ topic with the kings of borgacore could naturally not be limited to the identification with a particularly named superhero. We have the honor of speaking with the punks of punks and that would surely provide a very unique approach to the superhero topic.

Batman – the true hero of borgacore?

So I can finally come to perhaps the most essential discussion. My loyal readers will know by now that I am fond of the superhero question. But as I am sitting right opposite of a group of let’s say innovative kind of punks, we need to go much deeper into the topic and perhaps get to the philosophic core of it. “Why is Spiderman so much cooler than Batman?” I ask. What comes next is what I hoped for. Silence. Shock. Stuttering. In the beginning a careful “I don’t know if he is.” But then the full load of disgust on my incredible statement breaks loose. He is so overwhelmed with my boldness to claim such an impossibility, it takes a couple of seconds before he actually gets into the flow of speaking again: “I … I … I don’t think you can say this! Spiderman”, and you can hear the disgust in his voice, “cooler than Batman?” He is truly shocked. “What’s this?!” Also Kjell has gained his ability to speak again after this deep shock: “I don’t think that is invalid.” – “That’s probably because you an aneurism.” Frowning 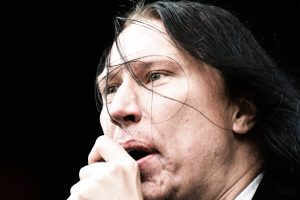 I accept their opinion: “Ok, so convince me of the opposite!” Some more wine is required to keep the thoughts flowing and, most of all, swallow the shock. I can see their brains working. Mr Aminoff is starting to laugh kind of hysterically! I am afraid he is choking … As he is coming to breath again: “The gay stuff again…” he says still laughing. We all join him. And while laughing Kjell tries to explains the details of the gay answers. But he is laughing so heavily that the words don’t reach his tongue. He begins several times, ending up laughing again before he is finally asked by the bassist: “Tell us the gay answers!” Still laughing the guitarist stands in “Well, just look at him”, he says in a deep and rough voice. The sound of his voice is accusing. Apparently my incredible statement is considered an assasination attack. Mr Aminoff tries another couple of times and in about the seventh try he says: “Well Spiderman’s special move is like this”, and he throws his right hand from his shoulder away over stretching the hand downwards to present his hand wrist from where in the movies the spider silk dart. This move, naturally, requires some royal exaggeration to highlight the point accompanied by a somewhat oversophisticated, false female touch. I watch and comprehend. “Got it”, I state laughing. „It is sort of sponge from his hand”, I hear. The gesture needs to be repeated, even a bit more over the edge than before and says at the same moment with a boring tone in his voice: “Oh, I gotta kill you.” Then Mr Aminoff looks to the others: “What’s Spiderman’s voice like? I can’t remember it.” I hear a pitchy “Mimimimimimimimi” from the bassist like the Beeper of the Muppets. “Toby Macguire, I am Spiderman” in an even more pitchy voice – reminding me actually of Kajar Yanar’s (German comedian with multinational background) Indian comedy character, Ranjid.

Finally I am introduced to the essential features of the one and only true hero: “The Batman suit comes with the old Whisky voice when you put it on.” And he imitates this voice, like growls directly from hell: “Hei there, where is he?” – “So cold waves directly”, the borga-royal guitarist says. “And come on, if you put Batman and Spiderman fight each other”, the Mr Langenskiöld begins to explain, “Spiderman would loose really fast. I don’t even think he would show up to the fight!” – “He’s still a kid”, I insist, protecting the superhero feeling like a total looser to me that very moment. “And then also if you think of the people behind the mask. If you would put Peter Parker against Bruce Wayne, Peter Parker would live for like seven seconds, I think.” “Tops”, I hear a comment and the royal vocalist agrees with that. “Bruce Wayne would pay him enough to kill himself”, he adds.

There is a little more serious side of the story to consider I learn from Mr Langenskiöld: “The Spiderman movies did not good to Spiderman whereas the Batman movies have done very much for Batman. Actually the Batman movies are good. The Batman comics are great by Frank Miller. Spiderman stuff is very, very lame. It’s just a teen boy wanking his everywhere.” A royal discussion evolves: “And did there – because I haven’t seen the new Spiderman movies, but, do they already use Dr. Doom as a bad guy like in any of the movies?” – “Was that not in Fantastic Four?” – “Because the bad guys in the Spiderman movies also aren’t that good. They have the Green Goblin, right? And then the Green Goblin again. And then they had Dr. Octogon. And I mean the guys from Vorna, playing here soon, would probably all beat them. No offense to Vorna but like …” – “They don’t seem to be the big fighters”, I say. “Yeah and they’re not scary. They aren’t fierce, actually. They aren’t fierce.” Then the bassists put on top “Like any male man could beat them. The Batman guys are like really fierce. They really get under your skin. They gonna know the next four steps you take.” – “And also Spiderman, if you’d actually talk with Peter Parker, try to talk with him like fuck it. I’m gonna go and drink my beer. If you talk to Bruce Wayne, you could find him really interesting or even fascinating.”

Mr Aminoff returns to Spiderman’s opponents: “Most of Spiderman’s bad guys have just died from boredom. Just throw me down of this building. I don’t care. And it’s not been because of any force or beating up. It’s just throw me down that skyscraper. I think so. So the conclusion is, Spiderman is not better in any way than Batman.” – “Batman is a golden girl. Spiderman is lullaby.” But then lullabies can be really scary and creepy, I think. The discussion progresses: “And I should have had embraced the fact that there was Venom?” – “Yeah. That was the only time he was cool.” “He just should have kept the black ink of goo. Would have done good for his career.” Well, the discussion is not a matter of royal graveness. So we’re laughing loudly, still.

Bob Malmström and the elephants

And while we’re still laughing, “Speaking of career, I have another problem for you to solve.” And so I can present the elephant issue. But I am speaking with Bob Malmström, the kings of borgacore. And elephant following at their heels is nor an issue or problem. It’s a gift! “Ah shit. I mean, the bass player of Carpethian Forest isn’t here today”, I hear Mr Langenskiöld thinking half loud. And Mr Aminoff admits, “Well it’s hard to imagine to have this elephant right behind you.” But Mr Palmén realises the opportunity: „I don’t see how this could be a problem! I mean you have a gig and you have an elephant standing with you on stage!” That brings Mr Aminoff back to the top: “It’s a really good feature like screw of this with pyrotech and actually you wouldn’t need to do anything. You stand there and … “ – “We could play on top of the elephant”, the Mr Palmén suggests before Mr Aminoff ends his statement. “You’d be the elephant-riding frontman”, he suggests to the vocalist.

“Are you proficient in elephant riding?” I ask. “Ah, yes. I had a few scholarships on elephant riding.” Getting more confident with the idea he continues: “We have so many elephants in Finland.” – “We might even have one each”, Mr Langenskiöld suggests. “We only see it as a good thing”, Mr Aminioff explains and the guitarist adds: “Good concept, I like it!” – “So you’re gonna include an elephant into your show?” “Great idea, thank you so much”, Mr Aminoff finally says. “We’re actually thinking on redoing this whole stage thing.” – “And there is so much space to fill here on stage!” – “Like especially when we played in Bad Tölz that stage was gigantic and three elephant families could have been there.”

I am impressed, I admit, however I wonder … “But then who would see you? I mean such elephants are big and tend to draw attention on them.” – “Oh yeah. All the German elephants are quite tall”, Mr Aminoff explains. But I insist: “I was not speaking of hobbit elephants!” – “Right!” with a sigh. “A new question then … I mean, the way home would be a bit slower. Not much.” – “But you wouldn’t need a car. The elephants could easily transport everything.” – “Taylor’d make a car that fits the elephant.“ – “In this colour”, point to the green pants again. However, I pity the poor animal and explain that this colour is inacceptable “No, the elephant would turn mad!” – “What if he likes green?” “He’d eat it up!” “Oh yeah, that could be a problem if he’d eat my pants!” A borgacore bass player without pants but an elephant on stage – what an image?!

I thank the band for discussing these essential questions with me. They thank for the interview. Unfortunately we need to remain a little more as the bottle of wine hasn’t been emptied.

One last thought on punk and borgacore: Many people around me have asked me about the bands I met. And mostly the bands were unknown tot the people asking. I remember that one who had asked about the music of Bob Malmström was a bit irritated by their punk approach just like they could be traitors to the idea of punk. I see things a bit different. As absurd as their lyrics and outfits may seem in the first place they actually punk the punk idea. So in mathematical terms they it might be punk2. And thereby they are a lot more authentic and punk than others making money sufficient to make a living or a fortune from punk music.

Thank you for showing the world that life is more than black and white and as life is often enough too serious and sad following me on that idea of pure self-irony. Looking forward to see you again, soon!

Bob Malmström – the kings of borgacore

Bob Malmström and the essentials of borgacore life

Bob Malmström and the festival gadgets