Bob Malmström and the essentials of borgacore life (pt 2)

Welcome back to my session with the kings of borgacore. But before getting into the details of the essential questions of life, let’s introduce the band. There is, of course, Mr Aminoff, the passionate vocalist appropriately dressed in a black suit including a tie, of course. I found him to be the networker of the band, as well. Then we have the rather quiet guitarist, Mr Palmén. His statements, however, as quietly spoken as it may, still rarely miss their goal. The green pants and ring pattern socks of Mr Langenskiöld, the bassist, we will see, play a cruicial role not only as kind of his brand mark of his stage outfit. This leaves Mr Wahlroos, the drummer of the Scottish hunting party, relating to their promotional photos.

A cell phone rang when we were about to start the interview. „He is a lawyer…“ Further remarks left room for speculation on the degree of criminal energy on the other end of the call. Yet this delay was used to bring some status equivalent drinks to the round. Chilean red. „Kippis!“

Gigs in China and Castles 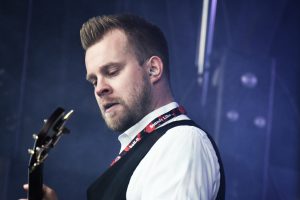 After the horrors of Braunschweig I find it neccessary to change the topic to the royal success stories. So I wonder,  “Then what was the climax? Which was the best gig ever?” – “Ever?” – “Ever! I need to cheer you guys up!” – “Right, right.” – “Tuska was fantastic”, Mr Langenskiöld points out with some pride. “Tuska was fantastic, five years ago”, Mr Aminoff repeats happily. “Really!” “And we had some really, really, really good ones in China as well. We played at a … you can’t make it up … it we played on Childrens’ Day the 1st of June. Three or four years ago?” his majesty checks back with his borga-royal band mates. “In 2013 and 2014.” “Four years ago the first time”, His Majesty continues then, Childrens’ Day on this small square with a pop band opening up for us. We were sound checking and it was raining, you know. The sound guy thought our instruments were broken because of the distortion. But then he … “

Now that makes an image: A square in whichever Chinese city, surrounded by a loose mix of small, wooden, shelter-like houses and highly modern towers with flats and offices there is a square where perhaps usually the market is to be found. The stage set up here would be large and hardly to be filled with only four musicians. Bob Malmström provide a new level of exotic decency to this scenery considering of their bourgeois stage outfit. A pop band to warm up for the kings of borgacore – that makes a contrast, all the more if you imagine it could be an Asian band in freaky managa-style costumes. Apparently the local staff was not fully aware of borgacore sound preferences. So the poor sound techie needed to adapt:

The borgacore royal master of low-pitched strings enlightens me with this experience: “He had heard a distorted guitar before so he went like ‘alright’ this kind of guitar, this kind of drums’ and when it is time for the bass he had me playing like a really long time and he tried every button and to open every slider. And then he was like ‚Hei wait a minute‘, and he ran on the stage, checked all the mikes and everything. Then he asked me: ‘Bass … broke?’ – ‘No, it sounds like this’ – ‘Oooooh!’” the master of the bass guitar explains. I see that brave and ambitious Asian sound guy in my imagination being nearly desperate and then overwhelmed from what Europeans consider an instrument to sound correctly. Poor guy. I cannot help laughing: “Oh my dear.” Mr Aminoff continues the story: “Then we were left to eat and so on for a couple of hours and we came when the pop band was playing and the square was quite full with people: everything from small kids to, you know, elderly people. And we thought ‘Oh they’re gonna leave when we start’, but they didn’t actually. There were people with their small kids like holding their kids in the air towards the stage.” — “And there were mosh pits everywhere”, Mr Langenskiöld  adds and says: “Kaliningrad, also!” Mr Aminoff: “In Kaliningrad we played on a Tuesday on the inner yards of an old castle” — “Medieval castle”, Mr Langenskiöld excitedly points out. “And we thought, ‘who’s gonna show up here on a Tuesday?’ But it was quite full in the end!”

Travelling through Finland you will notice quite some remarkable features in architecture and beyond. Despite the common preferance of straight-forward styles in architecture you will find numerous buildings, often museums or restaurants, looking surpringly castle-like although you will have a hard time finding actual castles.

“Finns are really prone on castles are they?” — “Yes”, Mr Aminoff confirms. I have become very comfy being allowed to address their borgoise highnesses with the most colloquial term „guys“. It feels like being considered near to equal.  “You guys have to come to Marburg. I think there are more castles and ruins of castles in 10 km around Marburg than all over Finland”, I invite them. “We have like two castles!” – “I heard of four?” – “We’ll do some Marburg castle tour!” Mr Palmén suggests – “One of the Finnish castles only exists during winter because it’s a snow castle, they make up in Kemi or something”, I am told by Mr Aminoff. “There are some big castles as well as Olavinlinna in Mikkeli, Turkunlinna and … do you count fortresses as castles?“ — „Hmmmmm …“  — „So probably? Not. Maybe? But we have a handful of almost-castles!” I frown and take a little break to prepare for the next question. After this excursion into the architectural history of Finland we need to discus more recent issues.

One of the essential features in the borgacore life style naturally is an appropriate vehicle. And no need to point out, you cannot start early enough to make a public statement on attitiude and political correctness – or something more or less like that. What kind of vehicle could be more posh and correct than the coming new Model 3 of Tesla? But then again, perhaps the younger generation has own ideas of „trendy“?

“I heard that you are very fond of cars. And perhaps you have a cousin, a nice, daughter or something coming to age soon. And she needs desperately to get that new Tesla 3 model for birthday. What colour (for the car) would she want to have that you would never buy her?” The vocal king hands over the question to Mr Langenskiöld: “I think you are the car guy. I think, this is yours!” – “Yeah but I think, it’s still the nice’s decision! If she wants something horrible, then she can have something horrible! I don’t know…” ‚Hail the freedom of choice in the early post subadult stage of development‘, I think. But it doesn’t help at all trying to stay serious on this cruicial issue. I can’t avoid laughing out loudly. “Well, the resell value is, of course, plummets, if you make really, really poor choices in your car colour decision” the sponsoring uncle considers supported by his guitarist friend. – “Yeah, I can see that”, I agree trying hard to be as serious as the issue on the table here. The kings discuss some critical options by pointing to let’s say interesting colours surrounding us summing up: “If your interior is vomit colour you got your Tesla forever.” Mr Aminoff confirms: “Yeah, you’re stuck with it”, laughing himself. But the dear uncle repeats: “But I don’t know, still her decision.“ At this point I adore his faith in the younger generation. „If they want their interior in vomit colour – then it’s alright.” It is nearly impossible to fight a very vivid image popping up in my brain: “But then she has to stick with it all her life?” – “Yessss!” The idea of that there still might be a fool somewhere buying that very unique styled Tesla arises: “Well if she can’t resell it. I think if she finds a looser who just buy it of her …“ At this point the deeper drama of the issue is tempting the musicians to go for a more passionate discussion, two or all three of them speaking at the same moment. “I think”, the Mr Aminoff says, “a mixture of his pants (pointing to the green pants of Mr Langenshkiöld) and the security guard’s vest as a like every other cushion” – “No, no …” – “And your socks combined!” – “Anyone who made it suited by would buy it instantly.” … “True.” “So it’s actually a good colour.” „So, no worries“ — “Yeah.” I admit, I missed the moment of their decision. So I have no clue in which innovative and surely trend-setting style the nice’s car will be delivered to her. In the end his vocal highness points out: “This is kind of shitty”, smiling happily.

I take sip of the Chilean red and wonder for a second what might happen next.

Read next: Bob Malmström’s ideas of advanced festival gadgets! And make sure this would not be read by under age children!