Tate? – Tate? – Tate?  What comes in mind when you first hear this name? To the older ones amongst us, it might be Sharon T a t e, the murdered wife of Polish director Roman Polanski… To those amongst us, who are interested in art and paintings, the T a t e Gallery of Modern Art would come in mind … 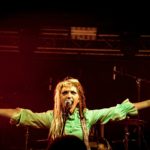 Well, this was yesterday and some decades ago. There is another Tate coming up, as rising star in the music business. This Tate is Lauren, Lauren T a t e ! – And with her, she brings her band, Hands Off Gretel, and again wait, wasn’t there a Grimm’s tale called “Haensel and Gretel”? Yes, and that’s it, nothing more, nothing less and the future will find out more what everything else is about.

And about time was it around eightish pm to gather on a misty, rather cold autumn day in Frankfurt in front of Das Bett, a nice, rather small venue in the Gallusviertel – opposite to some car distributors, namely Ferrari and Maserati – other than usual, these expensive sports-cars didn’t catch any attention, attention was on the forthcoming show tonight. 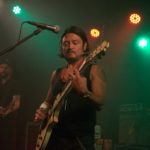 Supporting act was the local band Gargiass, a multicultural ensemble with origins in South America and Europe, they really did the job. The singer brought along wife and  six years old daughter to enjoy the show and strut around among the audience, amusing I must confess.

He reminded me of Danny Trejo as Razor Charly in “From Dusk Til Dawn” quite a lot, same moves and attitude, but later on he explained me the different shape between Mexican and South American natives, which was a very interesting chat with him. Their music was an interesting mix of Punk, Rock, traditional South American harmonies and accented singing, unusual but very catchy. After a short 45 minutes slot, they finished their powerful show and joined the audience waiting for, waiting for? Really waiting for?

Yes, waiting for Hands Off Gretel.

By the way, next to the left of the stage was their interesting merch shop, led by Lauren’s infamous father, the worst snorer of the world, as she once mentioned during this tour sharing a hotel room between six people. Nevertheless, he really is a very nice, enjoyable chap, happy for a talk with everyone and his daughter can be very proud of having such a dad!

The conversation with him pleasantly shortened the break and besides that, you could not only buy band shirts and CDs but some nice necklace and chains created by Becky, the bass player and other handmade little gems.

Forget About Sharon ‘n’ The Gallery 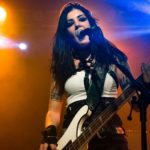 Then the light grew darker again, another band entered the stage, the o n e  we all been waiting for: the singer Lauren Tate with her multi-coloured mane, accompanied by blonde Sean Bon on guitar, blonde Sam Hobbins on drums and raven-haired Becky Baldwin from Bristol on bass forming Hands Off Gretel. All four of them dressed unique as well as originally and truely dedicated to their music, which is a wild mixture between Punk and Grunge, and everything multitalented Lauren can transform into a Hands-Off-Gretel song. 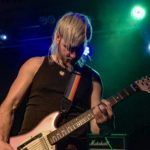 There is no comparison. There are not many musicians in that young age – Lauren started the band project when she was barely eighteen but already had recorded a solo album – proving to be such a raw, skillful and true talent as hers. Besides playing most of all instruments possible, she does the artwork, web site, creates her outfits and fights for a generation best described as Riot Girrrls and yes, they are a leading part of it in the best 90ies tradition when it all came up!

And not to forget as a true vegan she is decicated not only to human – girls and young women  in particular – rights  but also a fighter for animal rights as her colleague from Arch Enemy, Alissa White-Gluz. 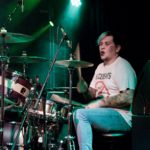 Opening with “I Want The World”, the songs rushed through, one after the other, the audience enjoyed the energy of the band and so did the band vice versa, no matter if “Alien”, “S.A.S.S”, “Milk”, “Bad Egg” or the closer of the encores “Kiss Me Girl”, just to name a few of the powerful, romantic, aggressive, accusing songs, the band and Lauren Tate stand for. To say so “Girls, fight for your rights and if you feel too weak alone, we unite and fight together for our rights”

After some really, really too short 75 minutes including the encores, it was time for Hands Off Gretel to leave the stage, three went backstage, one went to  the front of the stage and joined the audience. This one was Sean Bon on lead guitar who started a little extra show including an infamous circle pit in the middle of the audience, playing riff after riff after riff with no ending. The faint-hearted amongst the audience searched shelter at the bar, the merch or just stood aside to watch and enjoy the spectaculum.

Fairness Of The Audience

One thought about the audience. It was a funny mixture of young and old punk music fans, men and women, no age barrier, no gender barrier, no attitude barrier, rather like a family than a usual audience, full of respect for each other and even more important, the band and its musical skills which sometimes is rare, especially when a band consists of male and female musicians. I have seen enough of those “sugar daddies” on other concerts but not at this one. 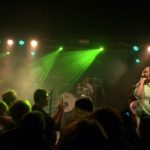 After a while, the rest of the band popped up, signing CDs, vinyls and talking to the people still at the venue, no rush, no businesslike behaviour, just true and unique coexistence between a band and its fans.

That is what Rock ‘n’ Roll really is all about and I can only hope – I believe it deep inside my heart – Hands Off Gretel will keep this unique attitude in the future, no matter how high they raise and how big their name becomes.

[…]  You can find our review of last year’s show of Hands Off Gretel in Frankfurt here: […]