It took the site host a considerable time to correct this mistake. I had already wondered how on earth Jani Liimatainen would make it to play with Timo Kotipelto in Vantaa and nearly at the same time with Insomnium in Japan? Even Superman or the Flash might have some difficulties in managing this. 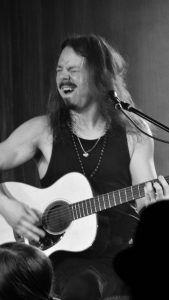 But then, finally the stand-in was revealed. And what a stand in he is! Wow!

Some years ago, I had the pleasure of attending a most memorable Raskasta Joulua show in Turku. Most memorable because the stage was a bit too literally on fire and believe it or not, most of the musicians didn’t even notice. Well, Tuomas did. I mean that deco cloth hang right above his position when it caught fire from the pyro show. The show went on as if nothing happened. And as one result of the show, I was deeply impressed by those musicians I had not seen live before, such as Tuomas Wäinölä. Don’t get me wrong. That gig ranges among the top three gigs in my life, last but not least because of the unbelievably great Northern Kings-line up among the singers. But those „new faces“ made the topping of the cake. And by new I mean, of course, new to me.

Because Tuomas Wäinölä, just to somehow get back to the actual gig, is and was everything but a new face. He has a long-standing record in the Finnish music scene of the most colorful kind and this variety of his activities – meaning thereby having the skills to do so at all! – is probably unique or very rare, at the least. As you can check out his vita easily, I simply mention, he worked with Kotipelto before.

Neither Vantaa nor the Hertas Pub is of greater importance to the universe, if you only take a quick look. But then you might remember that very popular names come from Vantaa neighbourhoods, such as Mikä Häkkinen, former Formular 1 champion. Still that rather small, dim pub right next to the massively reconstructed railway station made an appropriate frame for the program. It was filled with a mixed audience. I missed wearing a band shirt – Finnish bands had the majority by far, of course. But there were also people who looked like typical clients of a business hotel, and even more specifically dressed folks. It gives a good impression on Stratovarius‘ state of popularity in general and that of the band’s singer in particular, I should say. 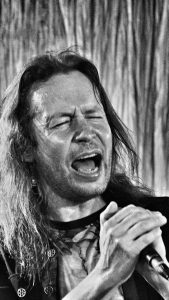 Quite on time, the musicians were lead through the audience on stage that contained only a basic set up. It put all focus on the musicians and their music! They presented a remarkable choice of cover songs ranging from 70s/80s metal classics to songs from Stratovarius themselves.
The audience sang along like half of the songs but that very passionately. There was this guy in the Amon Amarth-shirt having a solid fill already when challenging Kotipelto in singing „Wasted Years“. He did it loud enough so it should be heard clearly on stage. Still, and not surprisingly at all Kotipelto’s performance was way better. Although I grant my drunken AA fan, he might have shown at least the same passion in his performance.

The set list contained further highlights such as „Breaking The Law“, „Alone“ (from the Canadian sisters Heart), „Two Minutes to Midnight“ or „Over The Hills and Far Away“ which broke the ice – as if that was necessary? I frankly admit I’ve never expected a man to perform so brilliantly covering „Alone“ as Timo Kotipelto simply proved in doing so.
In memory of good, old Ronny James DIO, we all sang „Holy Diver“ and the show ended in the unavoidable Stratovarius classic „Hunting High and Low“. See, I do not know the lyrcis as much by heart as the all the others in the pub did. But then: who cares? No one! Kotipelto demanded the crowd to sing. And they did, enjoying themselves greatly. What could you possibly want more from a gig?

The audience grew constantly over the whole gig and I hope by reading so far you got it: The atmosphere was awesome. Do I have a rating? I have: if you have the chance, go for it. Really. Absolutely and essentially. It is music at its best! Kotipelto is a professional entertainer and passionate singer, performing perfectly and shows that music still is all he wants to do.
Wäinölä’s finger fly on the guitar and help the semi acoustic instrument to unexpected sounds. It was worth the while if you were deaf and left to watch nothing but his fingers and passion ruling his facial expression.
There will be more photos, soon!