Who would have thought this possible only some months ago? But there it has happened right in front of my eyes! The black haired opera singer-like diva Tarja Turunen and Marco Hietala, her blonde, former Nightwish mate and metal bard stand on stage together, arms around each others waist, singing from the depths of their hearts leaving the vast audience in amazement and awe. It is the very last song of the show. And damn, what a show it was! 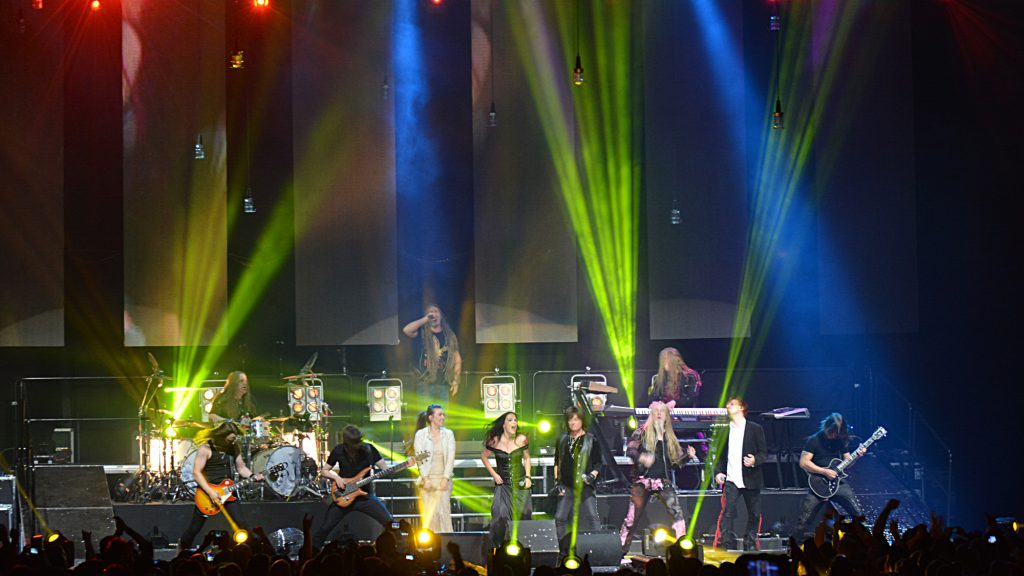 I have come to Turkus’s Logomo for the second time to experience Raskasta Joulua (= Heavy Christmas) and it is a fantastic show. My expectations were high. But then can they be too high? Three vast trucks transport the whole equipment, the stage and all the pyros all over the country. The once pub concerts have outgrown their earlier habitat, left the smaller concert halls behind and do now fill sports arenas and the largest indoor venues of the country. A T-shaped stage hosts the show leading deep into the audience. The band has use for all the space. Six vast screens cover the background walls and an extra screen on either side next to the stage shows the musicians filmed from the crew’s own camera team in oversize. These screens transfers the emotions of the singers‘ faces into the very last row of the gallery. Blue and green lights resemble the cold winter nights of the Christmas time. Neatly arranged pyros add to the pomp and glamour of the show. 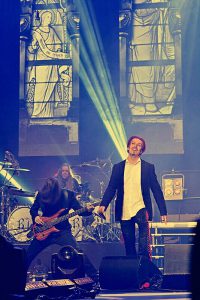 When the curtain opens, the expressive voice of Marco Hietala accentuated by the traditional Raskasta Joulua background band gets the program started. The list of singers performing tonight is covering a wide spectrum of voices and styles. Tony Kakko (Sonata Arctica) and the US American guest singer, Joe Lynn Turner (Rainbow) provide a classical tenors making a sound foundation for the Christmas atmosphere. Elize Ryd (Amaranthe) adds perfectly to that radiating all the warmth of her cordial performance. Festivity and glamour shine all the more from the female guest singer, Tarja Turunen. And the metal flavour urgently needed and in most convincing manner delivered derives from no one less than Ville Tuomi‚s (Lenningrad Cowboys) slightly harsher vocals. His massive dreadlocks and simple jeans underline the contrast.

I cannot praise them too much: the instrumentalists. It was this group of musicians that has made the sound of Raskasta Joulua more than any voice as they have remained the same for many years. And their chemistry and fresh dynamics exceed event their instrumental proficiency. When in the early years perhaps their names were rather kind of small compared to those of the voices they have become stars on their own by now – for the best of reasons and they showed pretty much of that. Each of them is as essential and adding to the atmosphere as any of the voices to me. So I cannot highlight a single one but name them to honour each simply in alphabetical order: Erkka Korhonen, Vili Robert Ollila, Mirka Kiril Rantanen, Erkki Silvenoinen, Tuomas Wainölä! Their dynamics with the singers are inspiring. 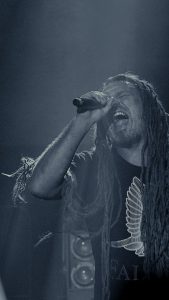 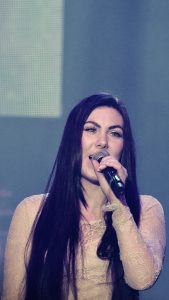 For many years I have wished to experience Marco and Tarja on stage together as I found their voices a perfect combination on songs like „The Phantom of the Opera“. I have had the pleasure to experience Marco with Tarot, Nightwish, the Northern Kings and Raskasta Joulua before. He has always delivered and amazed, made me drown in goose bumps. Just like today. Tarja’s part in singing the ‚Ave Maria‚ was a wonderful performance, moving even. But otherwise I admit I had hoped for better performance from her powerful voice.

I have seen some gigs of Amaranthe before and I frankly admit that Elize exceeds on stage with Raskasta Joulua her performances with Amaranthe band by far. She is, to me, the female half providing the unique Raskasta Joulua magic tonight while my male Christmas metal magician of tonight is Ville Tuomi. His appearance is honest and his voice comes a good deal deeper than in Kyyria or every early Amorphis days. He enchants us with some harsher, near growl and some straight yet directly hitting clean vocals. He adds the contrast and a slight note of aggression – as essential as salt in any dish! Don’t get me wrong, Joe Lynn and Tarja as much as Elize, Tony and Marco made a wonderful show. But all the (rather) high and pitchy voices screamed for a strong and dynamic contrast. Without this the show might too easily drift into the ranges of a classical Christmas concert with modified instrumental arrangements, of course.

The set list contains songs from the recently released album IV, some of their absolute classics such as „Varpunen jouluaamuna“, „Tonttu“, „Pieni rumpali“ or „Heinkilä härkien kaukalon“ and then some traditional, international Christmas tunes. Most of the songs are performed in Finnish and Swedish so that even traditional songs have an exotic flavour added on.

My bottom line is easy: it is amazing. In the end I am a deeply convinced fan of small stages and venues providing a rehearsal facility feeling. All the pomp and bombastic settings are quite the opposite yet do not fail to hit the aim to impress and take you on a journey into the world created by their master musicians. Thank you all for a unique experience.