Megaherz vocalist Lex in an interview on their new album “KOMET”

The German band, well more like an institution in heavy music, Megaherz is about to release a new album, „KOMET“. As I had the chance to do an email interview with them I could not resist. Then again email interviews are lacking one of my most important source of information – the interaction with my interviewee sitting next to me. I am limited to read in black letters, hear no words, no further sounds, no sensing of emotions. I have no face or pose to read. Only letters. Black on white. Despite this lack I take this a very authentic and honest discussion with Lex, mostly on his lyrics.

Apparently, physical absence of the interviewee is no reason to have a short interview. Not at all. I read the lyrics a couple of times while listening to their album when I developed my questions. Damn, very soon there were far too many and all seemed important or at least very interesting to me. In the end I left it to the band – not really knowing who would reply – which question to address and which to leave out. Lex, their vocalist, he replied to nearly all of them.

This reflects perfectly that he is a lyricist who feels the need to send messages, and he has strong opinions on what’s going on around us. He utters those opinions in his songs addressing political, moral and emotional topics in a smart way and elegant language. His lyrics have always been in German. And he lets me know that this is the language enabling him to make use of his entire linguistic spectrum.

I see no sense in translating the whole interview as it will modify the meaning, and my interpretation of his words will come with it whether intentionally or not. So let me tell you what we discussed, illustrate that with translations of some of his statements and if you understand >>German, enjoy the complete experience below my report here. 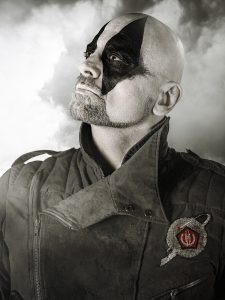 “KOMET” is a political and socially criticizing album speaking of the majority of songs. The song that touched me most, however, deals with loss and the idea that death is not the end of the contact to a beloved but deceased person. “VON OBEN” refers to the image, we often use to ease a child’s loss, the image that the beloved person is watching is us from heaven. Lex writes that X-ti’s father died amidst the album production and once he returned to the band – after a period of mourning  in solitude – he asked for lyrics to a set he brought with him: the instrumentals and line: “Ich weiß ganz genau, du kannst mich von da oben sehen”, meaning ‘I know by heart you are watching me from above’. Asking for the cause of the death, Lex highlights that the point is a different one. It is utterly unimportant why a person died but that death is not the end of the relation we have had.

It is a hard cut to go on to another topic, all the more as I find the core motif of the politically inspired songs on “KOMET” just as sad. But the album draws as a sad image illustrating western societies 2018. “KOMET” is about the rising ignorance, the growing gap and aggression in our society, the fear misused by new political forces fuelling the perception of differences and several threads when brave actions and civil courage are needed more than ever.

There is the song called “HORRORCLOWN” that reminded me immediately on Stephen King’s novel “It”. Lex admits loving the book but explains that his horror clown is a more real figure who is in the end only one of too many demanding the creepy lead role in his song. His song deals with walls separating people and thereby relates German history to recent US politics. He focuses on the hope as Germans overcame their wall. Lex is an optimistic person, quite in contrast to me it seems. He has yet not tired to highlight his hope again and again in our interview and that it is on us to do something and change things for the better: “I think before we bitch on something or talk it down, we should always mind ourselves first and wonder what have I done already to make it better or to change it for the better?” He relates here to my question on the term “Wohlstandsbauch” illustrating an inactive yet complaining crowd.

The metal community has been an open and welcoming one to me, I explain and ask Lex if he noticed rising populism amidst the community. He says: “No one can be safe from this and whoever claims differently fails to be honest with him-/herself. Populism addresses the deepest anxieties we have. The fear of loss, being left behind or down. People look back in panic and see only what can be taken from them instead of looking bravely ahead and take the opportunities that come along. Open-mindedness and tolerance are not coming for free but need to be defended against these anxieties each and every day. I see my role as an artist in this, too.”

The lyrics of “SCHWARZ UND WEIß” are one example for the highly sophisticated style Lex uses to illustrates his impressions, somehow he is even playing the listener a bit. The song starts to make you think it deals with fist or boxing fight, in an arena perhaps. But the crowd is not the audience. Only the change in the perspective of the lyrics reveals that this is a street fight amidst a marching mass. Lex deplores the loss of respect in our mutual interactions. “It is about all of us. It is about how we play and provoke each other and how we end up in unforgivingly opposing parties being driven ever further apart. We’re hitting another, one on one. We unlearned to interact respectfully. Our thinking is reduced to black and white. Either you are with us or you are against us. The exchange of reasonable arguments is excluded as only your own opinion counts and is the correct one. Where this will lead us to, I dare not thinking of it!”

We discuss the gap at which our society drifts apart and agree on that to be growing rapidly, unfortunately. Lex explains that there is a thematic overlap of many a songs and add one to another. The title track “KOMET” is a metaphor for change and dawn or to burn the old and come up with something new. It is situated between the old and the new world. He relates “KOMET” to the anxieties we spoke of and the hope he still has. He is determined to show that each disaster bears the chance to come up with something new and better rising from it if we are brave enough to go for it. That’s what makes “KOMET” a worthy title track in his perspective, he explains me.

Speaking of “HELDENGRAB”, I confront Lex with a hypothesis often discussed in history lessons that says, Germans have never really been capable of revolution. But he replies that in his perspective this was too pessimistic although a bit more of easy-going attitude could do. He highlights the incredible achievements not the major German artists for example of the Romantic or Sturm und Drang in literature have made but the normal people. It is important to Lex to keep in mind that those achievements of a revolution come on a blood toll for a many of those who fight for the ideals although perhaps it means only a small step ahead in the end. “It is about living an authentic life. Be proud of what you say, feel or think. If you run into obstacles – and each of us will – fight for what is important to you. Who is happy with him-/herself, is ready to master fear.”

I explicitly asked Lex to answer my last question, too. My odd question, of course. I went for the most classical one I use as an email interview is provides no room for reacting on the interviewees emotions and uttered opinions. So which superhero would Lex choose to be and why. “I don’t know if I’d really like to be one, but my favourite superhero has always been Spiderman from childhood on. I love his humour. He is not driving a muscle car like Iron Man, is neither the dark avenger like Batman nor the bright shining, omnipotent Superman. Actually, he is quite regular. He is like you and me with all these normal issues of normal people yet, he takes responsibility when needed and does so without any commercial interest. He takes it his duty. This makes him a true hero.“

When I listened to the album and read the lyrics, I knew Lex has tale to tell. And I remember another band saying they would quit the moment they run out of the urge to tell a tale with their music. Lex must have taken quite some time to reply to my questions and I am thankful he did. I appreciate his idealism and his optimism, I find in many corners of his lyrics and even more in his answers here. By taking all the time to reply to so many questions he showed appreciation for my doing in return.

Thank you so much, Lex and I’d be happy to meet you at the bon fire with a large supply of appropriate drinks and even more time to exchange all the questions I have now that I read your replies! 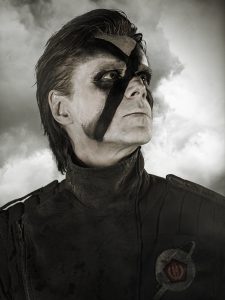