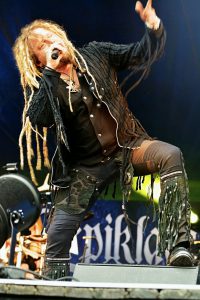 The final gig of Nummirock 2017 was played by the amazing and fantastic Insomnium. 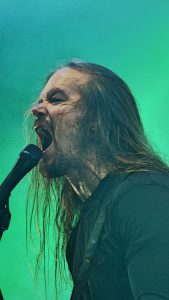 And what a gig they played. I met them at the check in and the first thing they or more precisely Niilo asked: „What the hell are you doing here?“ relating to me being German and thereby being theoretically able to sit at home in the sun enjoying a hot summer day. But would I want to have missed Nummirock 2017? No! Certainly not. And replying to Niilo I said: „Well enjoying the wonderful Finnish summer and of course the most amazing line up here!“ At the time they checked in the weather actually wasn’t too bad. It was nearly dry (from above) and even some spots of blue were to be seen by the keen eye well hidden between the dark clouds. Little later when Insomnium were doing their sound check things were totally different. It was raining heavily and a chilly wind made you long for a skiing dress! That of course would have come unhandy banging in the rain to the sounds of the fully played „Winter’s Gate“ album and the magnificent selection of older songs, mostly from „The Shadows of the Dying Sun“ album yet, of course not exclusively.  But with „The Promethian song“, the „Primeval Dark“, „The Ephmeral“, „Black Heart Rebellion“, „Revelation“ and of course the moving „While We Sleep“ the latest two albums were strongly represented. Who would care for the rain during a gig that was a plain proof of these musicians that they love doing music, love presenting their music to their fans and deliver all their heart and soul in their shows. Who would care for the rain with all the electricty in the air between the crowd and the band?

You may like humppa or not. You may like folk metal or not. But there are two bands that – at least to me – are more representing the spirit of Nummirock than any other. Eläkeläiset and Korpiklaani – So if you want to catch this spirit in any other place and time then check out their tour schedules and experience them live. I can think of no other band moving the crowd to something so unique and free of any limits set by genres or thinking in boxes thant these two bands. There is a party going on while they’re on stage. Their music and shows feel in the same moment like camp life, metal fever and Nummirock party. 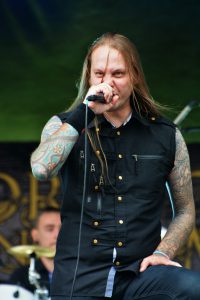 Perhaps the partially rather heavy rain added well to the gloomy and heavy atmosphere bands like From the Void, Whispered or Mors Principium Est intend to create. So the rain might have had it’s positive side as well, especially as no gig was played in darkness. The sun sets actually and we really had a freakingly impressive sun set on Friday but still it’s not getting really dark. Dim perhaps yet not dark. And even that only for like an hour or two at maximum. Some bands complain even that playing at the Kaaos stage at late the sun sinking over the lake right opposite of the was blinding. This year: at least there was some sunshine! 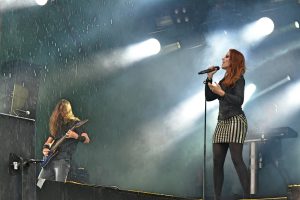 see all their gigs in front of the stage.

Thinking back of the interview I had with Jukka Kolehmainen and the recommendations he gave me, I would say, most of it worked out with me. Ajattara was a more than impressing show with a mystical master of the ceremony. Eläkeläiset, well you just have to experience this yourself. Words will never be able to catch this very unique atmosphere that comes into being when grim metal heads start dancing a waltz or a polonaise! From The Void is a band you might want to see live, too. Their stage set up and appearance works live far better than on a photo. Although it should be dark.

Let me spend a last paragraph on the ladies! There aren’t too many in metal. And there were not many on stage. But those we saw at Nummirock were impressing, starting from Ensiferum’s Netta Skog going on to the front women Noora Louhimo, Tatiana Shmailyuk and Simone Simons! Never underestimate a woman and you can’t expect enough of those I mentioned here! Looking forward to experience each of them again!