Out of Line Weekender 2019 – A Very Personal Festival Preview

Do you prefer the big, monstrous mega shows as that of Wacken or Nova-Rock?

They come along with standing at the in-field gate for two hours waiting to be let in exactly at the last chords of the last  song of the one big name you have wanted to see all your life, watching the show from a spot 100 m off the stage and thus on one of these large screens supplying a perfect outdoor-TV feeling, walking half an hour back to your camp because you forgot your favourite band’s latest vinyl to sign in the soon to begin meet-and-greet session you will miss anyway because it is overcrowded.

The Intimacy of Smaller Events

I don’t like that. My perfect festival feeling is: Standing close to the stage meaning close enough to watch the facial expressions of the musicians on stage. Having a drink with friends there and returning to exactly this spot with some drinks a few minutes later without bullying my way back if at all. And finally: meeting some of those musicians in the crowd later on to enjoy another band together.

There is only a small pit between stage and audience if at all so the stage is close to the crowd. Being amongst an audience of a few hundreds or let’s say not much more than 2,000 means that even from a spot back, where you will have some space around you, you still can really experience in detail what is going on stage. Small festivals – that’s where you go for the music not for a hike.

There is another thing I particularly love: winter indoor festivals. True, off the summer festival season, there is many a band touring and often they tend to travel in packages of four bands providing a long night full of music – a fair offer for the expense of a ticket price – mostly. As ticket sales, however, for classical formats have slowed down remarkably in the past years, new ideas are required and those have honed the assortment of live-music formats, at least from my point of view. I see those smaller winter indoor festivals in that regard. And to me they are highly attractive, for example because it is an opportunity to show rather unknown bands to a new market and see how the crowd reacts on them or from my personal angle: how I like them. And here I might need to mention that the live performance of a band still makes all the difference. There are many bands and even genres I would not listen in my cosy living room for leisure or on a longer car ride but certainly not miss to experience on stage. The chemistry, the dedication, the interaction with the crowd – none of those I can have at home or in my car. But look, that’s what has tipped the balance for a band like … 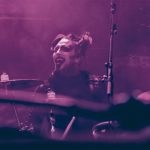 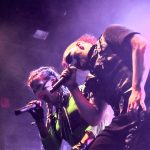 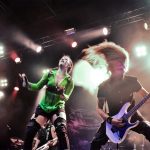 Usually I am not in for the faster genres, most of the screams and certainly not for too dominant synthesizers in metal. Usually. But then sometimes authenticity and a good live performance make all the difference. And who cares for prejudice? Metal means being open for the unexpected!

Back in summer, I had the opportunity to finally see Fear Of Domination (Saku Solin, Lauri Ojanen, Jan-Erik Kari, Johannes Niemi, Vesa Ahlroth, Lasse Raelahti, Sara Strömmer and Miikki Kunttu) live. Really finally! I had heard a lot of them from my Finnish friends. Each one had promised me Fear of Domination to be an unforgettable show act. They played a late slot. Last show of a long festival day at midsummer in Finland. The sun never really sets at these days in Finland. There is always light and yet some moments of very atmospheric twilight mark the shift from one day to another. In this gloomy atmosphere between the traditionally rainy days a most colourful and energy-sparkling band entered stage. Two drum sets?! Cool, haven’t seen that too often. Adam and the Ants in the very early 80ies and Icelandic GlerAkur but otherwise … Ok, Miiki Kunttu is actually the percussionist but also a most talented stage monkey, as the band names his role. Fear of Domination is way more than just music. And their music is a tempest: temper in disco beats, rushing metal riffs, thundering bass, heavy rain drums, heavenly vocals: growls as dark as the thick, nearly black clouds announcing the heavy weather and clean vocals as tempting as the sun before the storm howls. Now imagine all this staged in colourful costumes being the visual dimension of an all-fun show, spiced with a trace of punk attitude. Call it theatre or perhaps some sort of metal vaudeville.

Returning to a point mentioned earlier here: Fear of Domination is certainly a band that you need to see live to entirely comprehend them. And even though you might not be in for too keyboard-laden metal their dedicated show might still win you over. On the other hand, however much you will love their music, nothing compares to their shows! 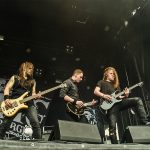 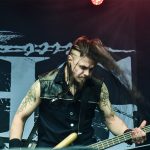 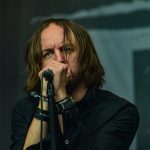 Editing in music to me is a highly emotional matter as music is emotion for me. And some bands not only hit a point but transcribe my own emotions into their music. And then, me becoming an editor of a metal magazine in the very end goes back to meeting three persons, one of which is Lauri Silvonen from Bloodred Hourglass (BRHG). I came across the band because I met Lauri after show when he fully dedicated and most enthusiastically promoted his band – that night actually his other band, Wolfheart. Soon back home, I found out he plays in BRHG (Jarkko Koukonen, Jose Moilanen, Jarkko Hyönen, Antti Nenonen and himself) as well and checked out their most successful song on YouTube. Damn, I caught the fire. “Valkyrie” – Oh, how I love this kind of aggression! Really. So I dug deeper and fell for songs like “Castle Ashtray” or “Quiet Complaint” that perfectly channel my own aggressions. I can dive into them, feel the music far more than I actually hear it and let go of what’s bothering me. “Where Sinners Crawl” makes me jump and wanting to run until I collapse even if I am too tired to get up at all. And “There Will Be Blood” is an anthem resembling the grace of a flock of storks rising from fog on the ground of an early-morning pasture in the idyllic plains along my favourite inline skating route. – I had to see them play live! But even in Finland there aren’t too many opportunities. Thus, it took some time, however, before I could finally see them rocking the stage. And guess what: It was a winter indoor festival (in Helsinki last year). And despite the big names headlining the festival it was BRHG ruling the hearts of the crowd. Their show is just like their music: energetic, moving, stirring, relieving, aggressive, authentic, honest to the bone.

By the way: they have just recorded their fourth album which is going to be released very soon (May 31st 2019). “Godsend” was produced by Juho Räihä (Soundspiral Audio) who also produced their previous albums “Heal” and “Where The Oceans Burn”.  They promise their style to be modernized and their output refreshed. 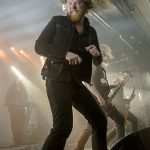 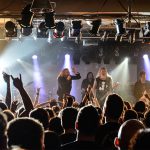 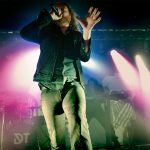 Interviews – that’s what speaking with Lauri triggered. And that’s what I did for the first time, accidentally also on the first day I saw Dark Tranquillity (Stanne, Jivarp, Amott, Brändström, Iwers and Reinholdz) rocking the stage. It was only a few months after this consequential encounter. A couple days before, however, a very tragic accident had taken a dear friend’s little son from us. Horrible story. I had pushed away the heavy emptiness to go to the exciting and inspiring conversation, my interview number one. This sensation lasted long enough to experience the interviewed band’s energetic show but melted into a weird mix of gloomy senselessness and stirring excitement when Dark Tranquillity hit the stage. I left my first row spot (after shooting some songs) and went to the back. I sat on a stair next to their merch desk and drifted into the songs from Dark Tranquillity’s latest album “Atoma”. Memories from my teenage years in the 1980ies woke – the keyboard passages reminded me of early Depeche Mode songs. Stanne’s clean vocals resemble the lightness of children on a playground while his incredible growls filled my void. Each word lingered and echoed in my mind. The riffs gradually eased me. I began to feel some relieve as if someone had put a warm coat over my shoulders. I didn’t see much of the show that night but the band’s chemistry electrified the entire venue. No surprise that after this very intense evening I have been waiting for my next opportunity to experience their show.

The OUT OF LINE WEEKENDER 2019

… will present lots of more bands. And I am looking forward to hear, feel and experience those I haven’t before. While my friends for example long to see Die Apocalyptischen Reiter, I am all curious to see Frosttide as I have found Markus Hirvonen’s voice in Alase’s songs like “Vielä” so expressive. And then there still will be Evergrey, Eskimo Callboy, Erdling or Blind Channel, and many more! But whatever your motivation or your favourite band is, it is all about enjoying ourselves, audience and bands together as one metal family.

This is what those small festivals deliver.

And imagine, it doesn’t matter if it rains or is cold outside …