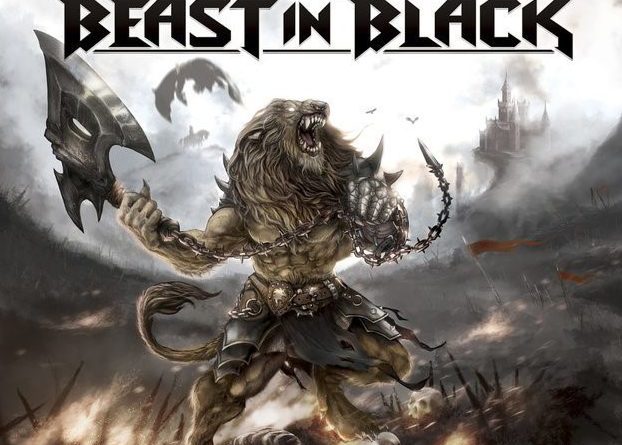 I could hardly write a Beast in Black review without mentioning Battle Beast. For one, it’s a project of one of their former members (a founding member at that), and also because of the musical similarities between the two bands (if you like to know more about the backstory read the interview of our contributor Katja with Anton Kabanen). Battle Beast had a successful debut with Steel, which could be described as a very entertaining tribute to bands like Accept, Gamma Ray or Grave Digger. It came out only in Finland, but was so successful that Nuclear Blast bought a license for its distribution. With the following album they changed not only their singer, but also to some degree their sound, which became more poppy and heavy guitars made more space for Nightwish/Sabaton-esque synths – the creep of synths from choruses into the verses couldn’t be stopped. The bombastic and catchy new sound of Battle Beast was a recipe for success but it seems that musically they were searching for direction. Some criticized the albums for a lack of musical direction and a certain disjointedness, an internal conflict between metal and pop sound, as well as for a bit less inspired songwriting. And some people will always be unhappy about synths, but hey, you can’t please everyone. You can listen to Battle Beast’s new release Bringer of Pain – that came out in February of this year – and judge for yourself if they had overcome this conflict between the metal and pop tendencies.

Beast in Black are, musically speaking, Battle Beast’s close relatives. All the main characteristics that mark the latter are present in Kabanen’s new project: a crossover between manowar-esque “true metal“ and the catchiness and pomp of eighties pop and radio-rock, an emphasis on high technicality of the band and singers, the overall “retro“ feeling of their sound and visual presentation (the Berserker coverart could easily end up on a BB release). The retro trend is quite widespread in heavy metal music, even in the power metal niche where Beast in Black and Battle Beast roam (the most prominent being Hammerfall or DreamEvil), but both of these bands are much less shy about borrowing from the vast archives of popular music (besides the usual most obvious influences such as Manowar or Dio we can hear echoes of hair metal, Judas Priest an even freaking Abba), which makes them stand out in the crowd. 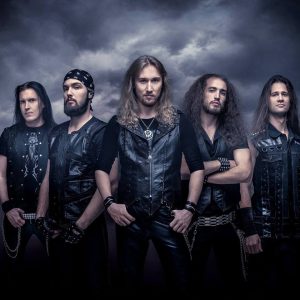 The album starts with a fast paced and more heavy (i.e. dominated by guitars) song “Beast in Black“, which hints at what we can expect from the following songs: quite straightforward songwriting, a guitar and synth driven wall of sound and catchy coruses. With the following songs we get more on the radio-rock territory with which we are familiar with from Battle Beast’s past three releases. The songs are so catchy and convey so much energy, that they their high replay value is undeniable. With the song “Zodd the Immortal“, that attacks the eardrum with Judas Priest inspired riffs, things get a bit  heavier. With songs “The Fifth Angel“ a “Hell for All Eternity“  the 80s radio-rock ride continues – the album just doesn’t loose steam and it is almost mind-boggling how many catchy songs the band is able to put together for an album. Things slow down a bit with “Eternal Fire“ that musters a synth melody that will probaly remind many of Europe’s “Final Countdown“. “Go To Hell“ comes closer to the typical German power-metal of bands like Gamma Ray or Grave Digger than other songs on Berserker; “End of the World“ is one of the more Sabaton inspired songs album. The closer is a sappy balad – yes, Beast in Black honour the unwritten rule that a power metal album has to have one cheesy balad – that will touch hearts of fans of Heart or Bonnie Tyler. The seventh song on the album titled “Crazy, Mad, Insane“ will be a bit of a head-scratcher for some listeners: it’s bascally a euro-disco song with a guitar track on the chorus (the last Battle Beast album has a song on it that sounds like “Xanadu“, so nothing new here).

I don’t think that I need to further draw home the point that this music is not a cerebral affair for demanding aesthetes. Some type of listeners would not touch this album, which is absolutely fine. But what about those of us, who also listen to music beyond what is released by Relapse or Seasons of Mist? The addictiveness of the song on Berserker can’t be denied. As I’ve said above, the album is full of catchy songs and doesn’t run out of steam. As for the overall sound I would also say that Beast in Black know what they want and that the sound of the album sounds coherent. We have some more wacky stuff here like “Crazy, Mad, Insane“, but it fits the spirit of this release. This sort of enterntainment is very straightforward, but you’ll get loads of it in return for your hard earned moolah and an extra serving of cheese on top.