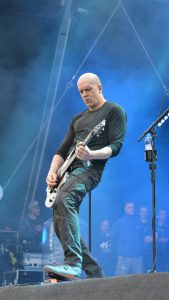 Now that was a long festival day! We started roughly at noon and returned home only after sunrise, literally.

Blasting gigs, passionate interviewees, meeting lots of cool folks on the venue and all this free of rain. It feels hard to make a cut what to write and what not.

Ok, the inteviews. There was a lot of input and some really intense conversations on bridging genres in music, an in-depth introduction of a very tradional instrument, its current rise in the music scene and how it is technically further developed – speaking with Pekko Käppi! There was a relaxed and long interview with Jarkko Lunnas from Damnation Plan getting us deep into composing from a drummers side, for example. And there was a very cool and relaxed meeting with Sam, Doe and Anttoni from Post Pulse on how they got it all started, about their amazing band chemistry and about their drive to make something unique.

Anneke van Giersbergen’s Vuur played their first fesitval gig in Finland ever and were amazed by the cheering and banging crowd they faced during their passionate gig at the Tent Stage. Wintersun gave an no less passionate show presenting mostly their current album, setting another, rather early highlight. The gusty yet rather warm wind added greatly to the intense atmosphere. There is a remarkably large number of fans who were at Nummirock last weekend and have come to Tuska this weekend. You can most of them easily tell by their recent Nummirock shirts. Apparently not only them but also Insomnium, whose Nummirock gig was threatened of being flushed away by the rain, were happy to experience a gig with better weather conditions. No need to mention that they delivered once more 100 % pure energy and passion on stage. This could only be topped by the great 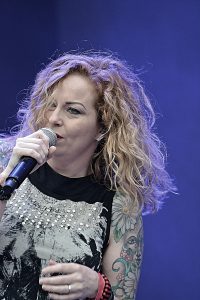 Devin Townsend, partially featured by Anneke van Giersbergen, who was not only according to my own opion the top act of the day. I heard numerous people say, he blasted the night and made the day!

Arriving at the Virigin Oil, Mörket combining Punk and Metal in a moving and energetic manner, still played on an unfortunately still rather poorly visited venue. The crowd grew remarkably while setting the stage for Vorna. After the gig Vesa, the singer, said: „I think I have still that Nummirock somehow in me.“ He has a great stage appearance and the authencity with which the band presents their music is very touching. The main gig were Barren Earth, unfortunately lacking once more their lead guitarist, Sami. However, his stand in, Timo Ahlström, did a most passionate and energetic show just as if he had always been there. The set list was composed from the highlights of their so far released albums with a focus on the current „On lonely towers“ record. As I had the pleasure to attend three gigs this year I could not help noticing that their incredible front man, Jon Aldara, has developed a much stronger presence and added on his stage intensity. It appeared that so he provided easier access to the  depth and complexity of their songs. – Some colleagues from other bands had joind the audience, such as Niilo Sevänen (Insomnium), Aksu Hanttu (S-Tool) and Olli Suvanto (Kaunis Kuolematon).

The crowd of Tuska is unique. Like really. One second you bump into the manager of a band, then into the singer of another band and half an hour later you see half of yet another band having a beer enjoying themselves. None of those is among the line up. Then taking a closer look to your neighbours in the crowd you will surely find some musicians from the gigs before or later, as well. And as all are considered on private visit the crowd regards them family never disturbing their privacy.

Speaking of today it will be the day of a welcome back for Timo Rautiainen and Trio Niskaulaukaus while HIM play as part of their fairwell tour. It is a promising perspective we have! So let go and see! 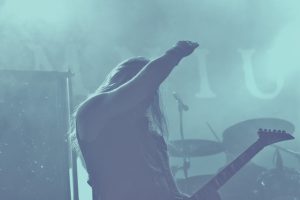 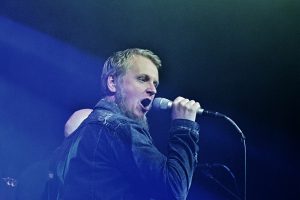