A Rough and Diverse Sound Crawling Its Way Under Your Skin

A few weeks ago I visited the second Metal Crane Festival in Helsinki. The festival – just like my whole trip to Finland – was a unique and overwhelming experience, which is why I decided to write an article about it and tell the world (see). Before the festival, most of the band names on the lineup were unknown to me, including Medeia. My mentor (Ms Cesar Little) asked me to pick my favorite bands of the festival to be included as photos as well. Leading the list of favorites was Medeia.

Having brought home a pile of merchandise including the two first albums Abandon All and Cult, I was intrigued to give a first listen to the new release Xensosis as well. That’s why my initial impressions, as well as a detailed analysis, are illustrated equally in this review.

Some general words about the album up-front: Xenosis was released in early 2019, bringing 10 new songs of an overall length of approximately 43 minutes, which is comparable to the two previous albums. This is the only form of stability though, as, besides that, the band evolved a lot, utilizing their versatile talents and musical stylistics to a brutal, massive and yet sophisticated sound.

Invasion of the insects – A reflection on mankind?

Let’s start the review by taking a look at the album artwork, depicting a surreal puzzle of various insects as well as the face of a creature similar to the ones seen on previous albums. Having an equally unsettling as grotesquely beautiful vibe, this summarizes pretty much the capabilities of the band, also bringing together a diverse mix of styles and elements into something intriguing, captivating and overwhelming.

Talking about the stories and pictures arranged by the band, we enter the domain of interpretation. A word of caution for everyone wanting to understand every detail and message delivered: Take your time! Even though only being a mid-sized album, the songs are so full with imagery, metaphors, philosophy and storytelling that you could take weeks of time getting accustomed to the actual contents.

Here’s my shot of a short thematic summary and assumed interpretation beginning with the very title of the album. A xenosis is a disease that originates in animals but can be transmitted to humans. Some of the songs describe the suffering and pain of a cruel sickness. But there is something else going on in the overall story of the album, which is the rise of an insectoid race gradually surpassing and nearly extinguishing mankind. Those giant insects seem to carry the beforementioned diseases.

There’s a lot of language suggesting critique towards humans and their arrogant, ignorant behavior towards nature. Giving the monopolistic title as highest of the creations to a new species is a disturbing yet reflecting thought.

Let’s bear with the picture of insects for one more moment. As former vocalist Keijo Niinimaa left the band after their last full-length album in 2014, Medeia kept us waiting for a pretty long time now. Six years later (with exception of the Manning the Helm EP in 2015), one could have wondered, what will emerge from the cocoon. A butterfly? A dragon? Something entirely unknown and new?

A butterfly you say? Are we talking about the same band? Yes, indeed, but let me elaborate on this: My first impression of the songs was, that they are a mixture of brutal, rough and every now and then also groovy elements, reminding me of the likes of Meshuggah. But with every time listening to the album, again and again, I could find more subtle yet precise details. We have rhythm driven, rough parts, deep growls, high screams, but also melodic guitar leads as well as piano passages smoothly embedded into the skeleton of Death Metal and Core elements. And at last, there are also experimental rhythms and tempi played with absolute precision, which I am usually only used to from Progressive Metal bands. So yes, there is far more to be found then just a brutal, growling dragon, but also an accurate, well-defined butterfly.

They are bringing a mix of countless stylistic elements to the table AND they are absolutely able to combine and deliver these in a complex musical profile. Not only is new lead vocalist Frans Aalto growling and screaming with several techniques and a broad vocal range, but also are nearly all of the other members contributing to the vocals with singing, shouting or screaming as well. Especially the use of Laura Dziadulewicz‚s female voice allows the band to design dark, atmospheric and soft passages, giving the overall rough sound another facet.

We have some heavy and rough rhythms primarily delivered by bass player Samuli Kuusinen and drummer Janne Putkisaari, who both passionately build an intense foundation for the sound of Medeia. Building upon this, guitarists Samuli Peltola and Pekko Mörö add complex and faster-than-fast leads, proving their luminary talent on their instruments as well.

There is one more musical building block to mention, which is the use of simpler shout-along-prases, that get stuck in the ear, besides the already mentioned diversity of vocal styles. Those allow listeners to already memorize iconic songs after the first time listening to them.

Yes, at first listen I only found a few songs, that stood out for me. Having heard their varied sound live before I continued listening to the album again and again. Make no mistake though, this band is no „standard death metal“. Xenosis is loaded to the brim with details and handpicked nuances. Multifaceted, brutal, precise, fast. Already captivating a listener on the album, this will also allow them to play some brutally ass-kicking live shows.

It is worth mentioning, that the sound quality of recording and production is far better than with the previous albums, showcasing the melodic subtleties crystal clear, but also allowing the brutally rough passages to feel like a hit in your stomach. This accompanies the musical growth of the band and its members like a charm.

Track by Track – my impressions 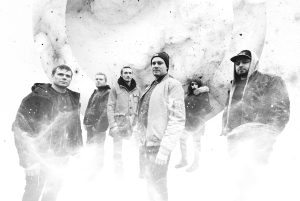 According to the official band website, Xenosis is installed as "the prologue to Medeia's album trilogy". Long-year fans can take a look beyond what they've heard up until now, whereas new fans will have the exact right starting point, to listen to all the Medeia albums in order. I'd recommend each and every fan of a diverse, brutal and complex sound to give a listen to them. The evolution Medeia went through in the last few years does not only show that they have a lot of potentials but also proves that they possess the ability to use them. I don't intend on pushing the band out of their role of a successful underground band, but Medeia definitely has the talent to become huge.