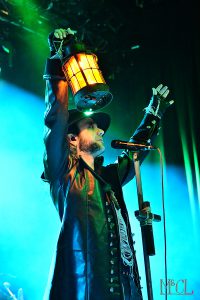 Moonspell’s recent album, 1755, was released only in November 2017. I gave the album a try and thought immediately: Wow! I should see them live. Definitely! Actually it came as a bit of a surprise as it was 2006 already that I bought my first and for a very long time only Moonspell album. It was Memorial and somehow it did not really catch me. But then Moonspell is a band you can hardly avoid. And surely you cannot do so for long if you like the darker, gloomier, and somewhat theatrical side of the metal world.

The stage is set up neatly to inspire curiosity. Church organ-like pipes hide the keyboards. There are impressive images of a gothic cathedral interior in the background and heavy curtains covering the sides – it all resembled the stage set up of a historic theatre play about to start.

Fernando appears in a military leather coat and a leather hat, carrying a lantern in his right hand. He is holding it high when his harsh and scratchy voice takes us on a journey back to Lisbon in the year of our Lord 1755. Simple piano passages, and gloomy, near Gregorian choirs alternating with a ghost-like female voice complement the gothic character of the setting.

After the intro, the rest of the band joins Fernando for “Em Nome do Medo” and hammers a set of four songs from the recent album into our eardrums covered in mostly green and blue lights adding perfectly to the to some extend spiritual atmosphere.

During the title track, 1755, Fernando wears a steampunky version of a Venetian pestilence mask with his hat and coat. Additionally, the stage setting, the Portuguese language and the Arabic passages of the highly progressive song complement to one image. It all adds to the vivid musical illustration of historic Portugal as a melting pot of Arabic and European cultures making it a very sophisticated metal show, inspiring and catchy.

The set list comprises some more time travels, such as into the band’s musical history such as with Night Eternal from the equally named album, Opium and the closing song Full Moon Madness from Irreligious and Alma Mater from the Wolfheart album.

All parts of the show add one to another in a perfect manner and Moonspell present their 12-songs set with the professional routine of their long-standing band history in the best of senses. The evil in Fernando’s voice contrasts in pleasant way sharply to the harmonically synchronised instrumentalists presenting a neat package of high-level metal entertainment. This is an outright show experience, carefully designed and professionally carried out. Definitely a: GO!