Music is so much more than just a creative piece of work of an artist or band. First of all it’s something which can give us the necessarily timeout from our particular daily lives no matter if we listen to it digitally, on CD, on vinyl or what we all definitely love the most in a live show. The last one is obviously the way with the most impact on us and our mood because the musically vibes are coming directly to us from the band themselves. But making it to the point to have the opportunity to perform live is the hardest step in a band history.

Altogether we rarely be aware of what’s behind the possibility of experience the music of our favourite bands in the first place and further on a live event. So that’s what this backstage series is about. We want you to show how important all the mostly invisible people around the bands are to make our days brighter, well or darker – your choice 😉

Starting with Ari Pietilä is a blessed opportunity to kill two birds with one stone because for several years he isn’t with his early 30s just the Artists and Repertoire (A&R) manager of Inverse Records but also the manager of bands like Wolfheart, The Hypothesis and Peekaboo Primate. Inverse Records (founded 2011) is based in Jyväskylä in central Finland and signs mostly Finnish Thrash, Death and Melodic Death Metal bands. The A&R department decides which band in the end is offered a contract and thereby determines the profile of the label. Here we go with a short 101 about Ari. 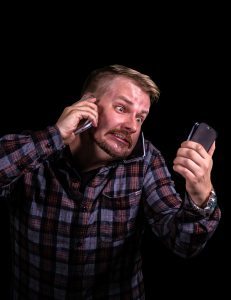 Superhero:
Thor – because he’s a super-cool guy with this super-cool hammer

Ari – the communicator and manager

Talking with Ari about his daily workflow an image of a loaded desk with a whole lot of stuff on it and of course a pretty busy but chilled man behind it comes more and more into life. Maybe he’s having also some music in the background to check out some new bands while answering numerous e-mails and messages on the social media accounts with promoters, agencies, venues etc. as well as scheduling things and keep in contact with the bands. While the working hours are uncountable it seems to be not a big issue for him since there are a lot of friends in the bands he’s working with and so he combines hobby and job the way everyone could wish for.

Apart from the aspect that almost all of us supposedly spending a good daily dose of our valuable time in the social media world to check out all the latest info and watch videos of our favourite bands, this world makes it also easier for the bands themselves to promote their music, have the opportunity to reach agencies, promoters and venues and reach a good amount of music lovers fast and without or just with low costs. Remember, the money they save they can put into their music and tour! In addition, and not to forget it’s a really good way to interact with the fans, too. All of this are reasons to make it necessary to have at least one person in the band doing the social media stuff.

In the point of time many aspects meet again. Ari’s job isn’t a „one-year job” but has a perspective of rather eight years as it usually takes around four years alone to come up with the first two albums of a band. It also means to plan several years ahead with each band when to tour, write new material or record a new album. And none of that can work smoothly when the musicians don’t see themselves for the next perhaps five years in the band. No surprise that Ari’s job can’t work without a good deal of idealism.

Speaking of the critical topic of budgets, Ari points out that band members need to be reliable meaning in regard of their performance as instrumentalists but also of long-term perspective in the band as producing an album and even more touring require serious front-up investments from the band (members). It’s hard to tell at which point or which share of bands make it to a break-even in their material investments. He explains that even bigger bands maybe just make it to this point and most likely not with their first album and certainly not as opening gig of a tour, not even if they are opener for a big name such as Children of Bodom. Still many bands love to play those slots and it’s important for a new band to do so to get their name known.

When it comes to the question about five characteristics about his job Ari directly said that: „being honest, straight, reliable, truthful and have my own opinion“, are pretty important to do a good job in the end. In the same moment too much honesty for example in contact with sensitive musicians can be the biggest personal obstacle in his doing, he says frowning. His job also is being often asked for advice on demos, arrangements or whatever which doesn’t mean necessarily this advice will be used in the end. He never says so but his jobs wouldn’t work at all if he wasn’t a very well organized person with excellent communication skills and a very good knowledge of human nature.

Impressive are the reasons Ari prefers to work with a band: „I like to work with people I like, need to like the music and see some kind of a talent and a future.“ Of course it’s nice to have people around to work with you get along well or already became friends with and you enjoy to meet in private apart from the job too. But that don’t give the musicians a wildcard at all. They truly have to contribute their part in this business when working with Ari. However, having a good relationship might also be the unsaid reasons, he sometimes does more than his job like doing the light of shows, helping at the merch, and also why he did the job of a tour manager of Swallow the Sun plus not to forget helping bands with their social media things. And even though a band he’s friends with might not selling that much he’s loyal to anyway, give them a helping hand and have a good time with them because: „This isn’t just a job. This is also a hobby.” And this is a fact you can read between the lines all the time during the interview.

Ari – his perspective on types of bands

Some bands have a mastermind deciding most stuff on own account while others decide on account of all or the majority of the members. For Ari, of course it is much easier to work with a master guy or girl in the band, the rest of the fellow band members count on. Then he’s directly working with this person through Facebook chats or whatever to discuss and decide things right away. Talking back to every single member will take much more time.

As most of you might know especially the Scandinavian musicians are part of more than just one band it’s absolutely understandable that getting a band together for a tour or scheduling things etc. are quite difficult for a manager. So the less bands the members are playing in, the easier it is to get a band on tour. Apart from the aspects that such a tour is expensive in the first place they have get the money back in with selling tickets, music and merch. Saving money is one thing to keep the outgoings lower. Therefore, the best options are when the band members are able to bring some other skills into the band beside their music such as graphic design, video design, have the opportunity to record the music at their own place etc. He explains that bands with the most income are the bands doing all these things themselves.

Something for the whole band on the other hand can be the socializing at the merch which depends on the band and their music genre of course. Ari brings up the image of a Black Metal band taking some fan photos and shaking hands which is definitely an odd picture. But there’s also the demand of the fans which is a cultural aspect. So in Spain the people loves to meet the band after the concert and buy CDs, t-shirts and whatever there is at the merch while in Finland it isn’t such a big deal.

Ari – his likes and trends

Have you ever asked yourself what kind of music a person who’s working in the metal scene listen to privately? Ari is giving us a slightly insight in his music taste when he mentioned that he likes all kinds of music, from Rap to Black Metal – especially classical True and Black Metal from Norway – but also classical, 80s-inspired Heavy Metal. Being asked about what a band must have to impress him, he says that they need to have something unique, something that is their own thing. He gives several examples like Wolfheart has their winter theme, Battle Beast have some sort of disco vibes in their riffs, Whispered have their own samurai thing. Then again there are always bands being very aware of this unique features when others have never consciously thought about or might even feel overwhelmed being asked for it. „Yeah, that’s the Finnish style”, Ari laughs.

Asked about genres and styles that are rising and falling in Ari’s personal opinion he notices several developments. The cleaner produced and very technical styles he relates typically to the 2010 period is losing a bit of importance while rougher and rawer and in that sense a touch more old-school-like styles are rising. Then again he points out that Death and Black Metal in Finland and Scandinavia have always played a more important role while Metal Core-influenced styles that play a more important role in Germany or the UK are working less in the North.

In conclusion Ari was a very interesting, easy to talk to and passionate guy who gives a huge insight into the business from many perspectives. Ari’s job – we would rather call his passion.