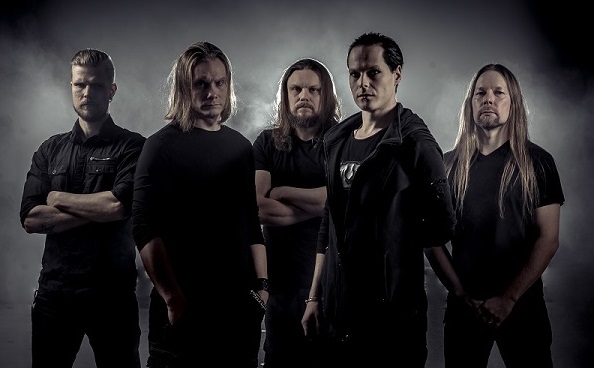 A reviewer shouldn’t smile. Definitely not when the music is sad. He shouldn’t feel satisfied by the work of others. Quite the contrary, he should pull the carpet underneath it, because that is, after all, the reviewer’s purpose. Moreover, the reviewer knowing what he was going to write about the expected album and what the rating was going to be, could indeed pick to pieces anything that wouldn’t fit his concept.

Kaunis Kuolematon, those beautiful immortals, are a kind of rarity, waiting yet to be discovered by Czech listeners. One reason for this might be, that this band has one disadvantage for a Czech listener. The songs are not in English. At the first glance, it might seem that the band with a weird Finnish name, singing surprisingly in Finnish, shouldn’t stand much chance behind the borders of its homeland. But there is one strange spell about it. Kaunis Kuolematon can afford using Finnish, just like famous and loved Korpiklaani or silently adored Moonsorrow, regardless that language skills of their fans are sometimes limited to a word such as ‘perkele’. The music is so self-explanatory and strong that Kaunis Kuolematon could sing in Swahili and it wouldn’t matter.

Their music resembles of a painting, which keeps changing with every single tone. For me, this music is actually visual and full of soft, dark colours. If there is someone who considers melodic doom metal boring and lacking the dynamics, then he really needs to hear Kaunis Kuoematon, for it’s dynamic, sparkling, emotional music, which is also perfectly shaped and whose proportion of sadness and hope is well-balanced.

The band was founded in 2012 in Finnish city called Hamina and the newly released album ‘Vapaus’ is only the second full-length record of this five-men team. Kaunis Kuolematon is a band that has found its place in the sun quite quickly. And when the band has many fans right from the beginning of its existence, it usually means that those fans were originally gathered around other projects. This means that the line-up doesn’t feature any greenhorns who are only learning how to hold a guitar, trying to write a few lines about death.

I must introduce the members of Kaunis Kuolematon so that I could demonstrate what’s so special about the band. Some of the names might indicate that the project has to be perfect even to the non-Finnish listeners. And the musicians are doing all they can to make the project perfect. Listening to Kaunis Kuolematon is therefore not only an experience of a total aesthetics, but also an extraordinary orgasm of a musician’s ear or a music lover.

Mikko Heikkilä is not a name, which would raise a common listener from a chair. It’s an inconspicuous name of an inconspicuous music worker in the background. A man half in a shadow, coming into light only from time to time. even when he’s on the stage, he’s trying not to be the centre of attention. Why? I’ve got absolutely no idea because his name should be as known as the name Saukkonen. After all, these two men worked together on more than one project. Why isn’t Heikkilä famous? It’s definitely not because fans couldn’t pronounce his name correctly. Fans are willing to undertake such a danger for their idols. It’s not even because he wouldn’t be charismatic enough. Quite the opposite. Ladies could sigh dreamily on the sight of Mikko.

Heikkilä might have a feature typical for bassists. They all can be invisible. They keep the mechanism of any band going without being in the front. Heikkilä’s other feature is typical for poets. That is a strange kind of shyness that leads you on the stage in front of the masses, but on the other hand, doesn’t drive you to communicate with the audience.

The poems sang by Kaunis Kuolematon are mainly his work and those who listen to RoutaSielu, Sinamore, Red Moon Architect or Black Sun Aeon should recognise his signature. He has specific melodic lines, which are significant enough. And he has a very characteristic clean vocal. Speaking of the Finnish word ‘kaunis’, which means ‘beautiful’, it’s necessary to say that Mikko has a very beautiful singing voice.

Nevertheless, Kaunis Kuolematon isn’t one man’s band. The process of writing the music is embroidered with many different influences, which are used to the last drop by the experienced musicians whose names could be found on the line-up lists of the bands like End of Aeon, Superdeathflame or Tomb of Finland. When the guitarist Ville Mussalo composes a song, it’s always perfect. And judging by the number of sounds mixed from all the other music genres, the rest of the band definitely participates in the process of creating too. The drums are mastered by Miika Hostikka from gothic project Sinamore, the strong hand holding a bass belongs to Jarno Uski from End of Aeon and the last name on the list is Olli Saakeli Suvanto.

It’s hard to name a project which would be somehow prominent for Suvanto because just like Heikkilä, he appears in more projects at the same time. The noticeable harsh vocalist gave the band more than his voice. His fascinations by the non-metal music such as electronic music, pop, hip-hop or ska, are hearable in Kaunis Kuolematon. Suvanto isn’t only a singer, he’s also musical personality. He’s able to compose on his own. This means that Kaunis Kuolematon is actually composed of five creative musicians who are fully aware of the fact, that Kaunis Kuolematon will never be a profitable business. They don’t do it for profit. They do it because it’s beautiful…

As I said in the beginning, I didn’t expect anything better or surprising of the new album. I was looking forward to what I knew. I didn’t expect anything too different from the first album ‘Kylmä Kaunis Maailma’ which introduced the style of the band with its brilliant instrumentation and emotional performance. However, these gentlemen like to play. They reused their style and gave listeners the second album, which sounds simply as Kaunis Kuolematon, saying: ‘Well, that’s what you’ve expected, right?’

No. Although the whole album sound familiar and characteristic for Kaunis Kuolematon, there are so many things going on in the background that I’m not capable of hearing them all at once at the first or the second or the tenth listening. I will have to take only small doses of this drug. The first wild single called ‘Eloton’ suggested that the variability of the electronic sound would be more complex than on the previous album. Whoever thought that ‘Eloton’ would be the one song, which would stick out, while the other songs would be good but lacking big musical ideas, will probably stare in amazement.

‘Hurskas’ contrasts to the previous song by the sophisticated retro sound leading us to the old-school death doom from the early 90’s. However, the perfect rhythm, the background electronic sound, and the precise rhythmical guitar make the song sound modern. When the song comes to the solo part, where it reminds of the old Amorphis, then drifts to painfully beautiful highs with an acoustic sound, all that to support Saakeli’s voice, it turns into an experiment without any genre. All of the genres are in it.

This delicacy turns into the doom experimental evening sorrow, so characteristic for the style of Kaunis Kuolematon. The song is called ‘Yksin’.  There is a trace of Pink Floyd in the guitar riffs but Pink Floyd didn’t use a violin… There is almost folk sound in the background creating a black metal-like atmosphere, which mirrors the melancholy of Heikkiä’s voice and Suvanto’s thundering supported by the distant female vocal. There are several ideas which might come handy to players of symphonic metal. The melody might interest players of power metal. Now how the hell did it appear in the music of Kaunis Kuolematon? How could they use it in such a brilliant way? Frankly, I don’t know. I’m too caught up in their style.

‘Tuhottu elämä’ is probably the only song which absolutely corresponds with the style of Kaunis Kuolematon as it was introduced on their first album. It’s a sequel of the song ‘En ole mitään’. it’s a red thread pointing to the familiar style. However, this doesn’t make it anyhow banal or easy to listen. Quite the opposite. It’s a storytelling, deep and sad song build mainly on the lyrics.

‘Ikuinen Ikävä’ is also somewhat traditional but it includes more electronic sound, which gave it a different shape.

‘Ikaros’ is again built on classical, heavy sound of the past which stakes on the perfect drums and heavy guitars. There are a simple melody and singing which helps mythical Ikaros to fly and then there is Suvanto’s scream which represents the earth and the gravity, which is pulling dreamers back to the ground. This song is beautiful from the start to the end.

‘Arvet’ reminds us that Kaunis Kuolematon has a gift of turning the sadness and dreaminess into the music. Here we also realise we don’t have to speak Finnish. There’s no need of understanding the words. We know what the song is trying to tell. We feel it. Here we realise that the music is a language.

‘Sanan jotka jäivät sanomatta’ is the last song of the excellent album. It’s a song that says farewell. It’s simple, strong, beautiful. Very Finnish. This song could be a lesson for all those musicians who are trying to turn doom metal into shoegaze and a possible sophisticated minimalism. In fact, being a talented and brilliant musician is enough to create the perfectly soft expression regardless the heavy sound.

Kaunis Kuolematon is setting a good example in the genre now influenced by indie rock and similar genres. They are able to combine those influences very naturally, they are not afraid of using anything and yet they do not lack originality or ideas. They can work with the simple motifs and they are not trying to look intellectual. They can actually look naïve and revealing if they need it for the music. They do not wear any masks, they do not hide or deny their sources of inspiration but they work with them in a creative way. 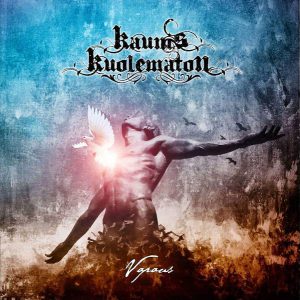 Kaunis Kuolematon is a band of a fascinating music and ‘Vapaus’ is an absolute musical experience, which has the potential of lasting a long time. Last year, the Finnish metal scene was crowned by the project of Insomnium called ‘Winter’s Gate’. This year’s crown is definitely ‘Vapaus’, the strong and interesting element showing the world that Finnish metal scene is still alive and has a lot to teach us.