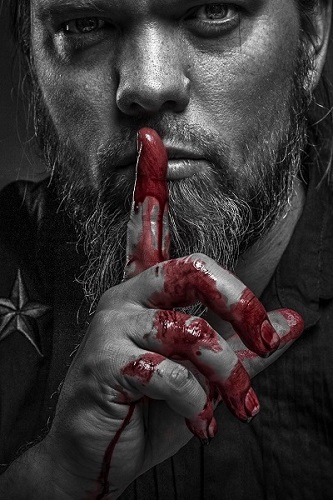 ‘Doom metal? No-one listens to that for heaven sake!’ someone said to me quite recently. And someone else said: ‘You listen to death doom metal? What the devil is that? It sounds frightening.’ It’s always awkward feeling, listening to a subgenre which has a small fan base, trying to persuade the others that it’s a fantastic music.

It reminded me of my salmiakki problem. You know, those black, liquorice candies, sometimes even with tar or pepper flavour, which are considered a delicacy in northern countries. One tends to say that simply no one can like them. Even them in the north has to feel how disgusting the taste is and they just got accustomed to it, so that they’d have something to boast about. Candies in the rest of the world are colourful, tasting of strawberries, peaches, chocolate or whatever… but salty liquorice? With… tar? Seriously? Ugh!

Doom metal is just like salmiakki. Black, sticky candy in a world full of blue, pink, red and yellow ones. It’s a hidden thirteenth chamber at the end of a long corridor called metal. The voice from the metal grave, sticking its bony fingers from the earth full of worms and beetles. Something which no one talks about because even that black metal has its charm, but doom? A terribly boring thing, only a couple of madmen listen to.

Do you like tar salmiakki? In that case, you either know Markus Laakso, or you should find out more about him. He will give you as many black candies as you like and he’ll bewitch you by that stable, almost static rhythm. No matter, if his melodic voice sings the songs in English or Finnish, Markus Laakso is an icon of a minor genre called death doom metal.

Markus Laakso was born the 26th of August 1976. It was quite an ordinary Thursday when nothing more significant happened in the world. And judging from the name, which at least for Czech people, sound like some name of an known Finnish hockey player, he was born in Finland. The muses gave him a lot of talents, and so he could choose, whether he’d become a musician, a writer or a photographer. He became all of it in the end. However, he did not use his talents to have a tribute statue in a park among the tulips. He enjoys the arts and he’s not selling it for high prices. He’s one of those, whose names might fade after they’re gone. And that would be a pity in Laakso’s case.

He didn’t follow his father, who worked on diabetes research, to the field of science, but still, there was something exact in him. After all, doom metal is a quite systematic and to some extend mathematical music, which doesn’t aim at emotions or create ecstatic states. It’s a music which can be understood by reason rather than by heart. Nevertheless, a musician has to get to it step by step. One such step could be Scorpions, Kiss, or Guns n’Roses. Indeed, the musicians we admire for their creativity and originality of sound, often have the same music idols as we do. Our music roots are similar. However, the flavour depends on our own choice and imagination. Laakso’s flavour choice was… salmiakki, although as a kid, he listened to the same kind of music as everyone else in San Diego…

Oh, I forgot something. Laakso left Finland when he was eleven and he saw the world. Thanks to his father’s career, he went to San Diego. Maybe that’s the reason for why he’s so ultimately Finnish now and why he uses Finnish poetry in his projects. People who left usually see their homeland differently from those who stayed. And Finland was dealing with different topics and problems than eleven years old Markus in Kalifornia. He has time to grow up and explore. Interesting was, that the music career was passing him by. He definitely wasn’t a child, which would practice the piano for many hours a day. The muse’s gift was sleeping inside him unused. He was only a listener. He was bewitched by Vivaldi, as a child, and he had some piano lectures, but nothing indicated any deeper interest. The music wasn’t his need, or so it seemed.

After the return to Finland, Laakso decided to actually create music. First with the band Chaosweaver. Given that he was almost thirty at the time, one might say that he lost his musical virginity quite late and with quite a complicated genre, which relies on technical industrial part in a black metal cloak. We wouldn’t find the name Laakso on the list of members. He was behind the keyboards under the pseudonym Max Power. He also added a new skill in his collection, which was playing the bass guitar. And that suited him perfectly. He is a kind of a human bass guitar in a way. Provided that his look is quite vikingish, he could charm the audience by similar opulent shows as Johann Hegg, but he never fell for battles and horns full of mead. He likes a technical sound.

The biography could end here. Despite its original and innovative sound, Chaosweaver never managed to break into the world stages and they’d become an interesting artefact for the seekers of hidden treasures. Laakso had family and continued living like a normal person. One should found bands when he’s twenty and dreaming of fame is also younger men’s thing, maybe that’s what Laakso thought sometimes. On the other hand, kiss of the muse is far worse than a tattoo. It gets deeper and it’s more intensive. It pushes a man to create. And it can’t be removed by laser.

Kuolemanlaakso, a band which was founded by Laakso in 2010, is an interesting, extraordinary hybrid with even stranger sound. This couldn’t be founded by twenty years old lads, because this sophisticated mixture of a dark sound of doom, carried through the swinging atmosphere of static rhythm by the striking scream to the distant horizon, doesn’t really call for fame and mass publicity. This intimate project, whose origin is more or less random, and which reminds of Chaosweaver only in rough outlines, found a way through the Finnish metal scene and Laakso stayed faithful to it despite the certainty that he won’t make a living of it and that he’ll even have to put some money in it. It’s definitely a very mature musical project and Laakso gives his best in it. 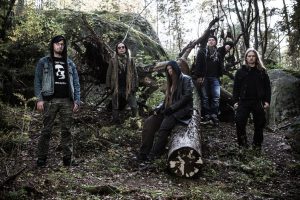 I know that name Eino Leino may cause an ironic laugh from the Czech listeners (Leino sounds the same as the Czech word lejno, meaning an excrement; note of a translator), however, this famous Finnish poet certainly didn’t choose his pseudonym with regards of Czech. His poetry represents one of the Finnish tops of literature. He is something like Mácha or Vrchlický (famous Czech poets note of a translator) and the respect for his poetry persists, even though the famous poet died in the 1920s. Kuolemanlaakso took his poetry, build their ambiguous music around it and so the first album Uljas Uusi Maailma was born, joining Finnish past with something, a common Central European could consider the perfect essence of the distant north.

The first Kuolemanlaakso album’s sound was sufficiently weird, just like Finnish films. And it was also as technical as Finnish hockey. It contained melancholy, dead calm, cold, emptiness. Heavy riffs, creative keys, vocals which sound almost primitive and an excellent scream of Mikko Kotamäki, who enjoys changing techniques and thus using everything a harsh vocal can provide.

Laakso decided not to give a listener time to accommodate and provide an unusual musical experience right from the first track Minä elän. And it was an experience which found a way deep inside my brain. Every time, I listen to this song, I feel something old or even ancient roaring inside me. And the bass line of this very song is really iconic for the style of Kuolemanlaakso.

The five men band caught my interest right from the start. Laakso, Kotamäki, Kouta, Tiera and Usva, became bearers of something unrepeatable. There is nothing like it anywhere in the world. Kuolemanlaakso sound’s absolutely unique. Even though their originality has its roots in many musical fields, they still remain an unclassifiable item in the discographies of the collectors. Following two albums Musta aurinko nousee and Tulijoutsen only confirmed their uniqueness. Moreover, they proved that doom metal wasn’t boring at all.

Laakso is a man who loves to experiment with music. He also has an advantage of not clinging to his musical career, which gives him a plenty of freedom. I think that the music is as important to him as for example photography, writing, of playing his favourite bowling. That ease and somewhat loose, almost lovers-like relationship with the band allows him to juggle with anything he likes.

After the three albums and three years of band’s existence, Laakso found himself in a situation when it party lost its frontman. Swallow the Sun were recording a big musical project Songs of the North, which cost them a lot of work and Kotamäki had to care for this project more than for Kuolamanlaakso. Kouta was also partly missing because his band Verjunarmu was recording its album 1808. It was a year of Laakso’s success as a writer when he finished his book about Finnish musical legend Amorphis. It seemed that Kuolemanlaakso would be put to sleep and wouldn’t release any new album.

But it did. And again, it surprised the listeners and even the critics. Not even that it stepped out of the tracks and a classical picture of the band’s style, but it also didn’t fit the expectation of its fans. They divided into the two groups. The one half considered the new album M.Laakso- Vol.1: The Gothic Tapes a betrayal of the style and a shift towards the mainstream because the album was too melodic and elegant. Others said that the album reflects Laakso’s want of popularity because the lyrics were English and the last group, consisting mainly those who hadn’t known Kuolemanlaakso before, were bewitched and they were defending the album.

The truth is, that this album is very different from all Laakso’s work. Even I was frowning at the use of English because one interesting aspect of Kuolemanlaakso vanished together with the Finnish language. Still, the album is not bad at all. it revealed Laakso’s great singing talent.

Even though he’s not a natural bass, his singing voice has some fascinating qualities and surprising depth. Thanks to carefully composed songs, the album consists of typical features of Kuolemanlaakso, which shows especially when we hear Kotamäki’s scream, but even the melodic songs sung by Laakso himself does have a lot of energy.

It is yet another musical experiment with big potential and Laakso couldn’t betray his style, for he has none. He doesn’t hold on one strong rope, but he’s playing with many colourful threads. I suppose, that the album will be appreciated in future. The trick is to learn how to listen to it and accept the change of style.

It’s 2017 and Laakso promises that he won’t end the project and he’ll head to the studio again. Everyone who knows him is curious, for they don’t know what path he will choose this time. He surely won’t leave his slow, doom rhythm, for doom has always been a natural choice for him. However, what the sound will be… that’s known just to him.