It might be dangerous to start a review with a statement that a band reached the highest possible peak of its career. Especially if the discussed band is Wolfheart. The danger is in two factors. The first one is that the reader doesn’t need to know anything else because the fact, that the album is good, was said right in the beginning. The second factor is even trickier because Tuomas Saukkonen, a founder and a frontman of Wolfheart has sort of a bad habit. When he feels, he reached the peak, he has a tendency to bury the successful project and find something else to occupy him.

I’ve decided to take that risk. I’ll do it. I’ll write that Tyhjyys is the present top of the Wolfheart’s work and that the title of ‘Finnish event of the year’ is well earned. Now, I would like to ask Tuomas Saukkonen not to found a new band, because the term ‘present top’ doesn’t imply that the next album couldn’t be even better than Tyhjyys… For now, though, I can’t imagine anything better.

The eight tracks (three out of them could be heard as a teaser before the release of the album) creates a complex shape with everchanging, movable walls, which force the sound into different forms. But still it holds together. It’s an infinite kaleidoscope of music. The primary colours are sufficient for creating the endless quantity of effects.

Tuomas Saukkonen is a fascinating example of diligence and toughness. He succeeded in becoming a dominant, self-confident musician who can even irritate someone because of his quick way to the top. Whoever might say that Wolfheart is an overestimated project, which stands on the fame of Before the Dawn, should listen to Tyjhyys carefully.

Those eight interesting tracks tell more of Saukkonen that it might appear. And not even of him. When I say, it’s a musically mature project, I mean the situation, when a composer enjoys his musical ideas, is not ashamed to use some clichés, which are very common especially in melodeath but he can transform them in a creative way.

Another sign of maturity is the fact that Wolfheart does no longer stand only on the personality of Tuomas Saukkonen. That moment, when a talented man asserts himself, achieves everything he wished for, and takes a step to the background without any fear of losing his position, that is a real musical maturity. Every single member of the group has his own space on the album. And it’s not only a small solo, it’s a big space for his own creativity. Wolfheart, which was formally based on the fame of their founder, is no longer a project of one man. It’s more about cooperation and mutual respect of four brilliant musicians.

Saukkonen isn’t a talent seeker. Not one of his fellow players is an unknown someone coming from some small village in Finland. Everyone who takes interest in the Finnish scene knows bands like Mors Subita, Bloodred Hourglass or Disease of the Nation.

Mika Lammassaari is not a man, who wouldn’t find an opportunity to show his talent as a guitar player. He is very appreciated and considered one of the best. If he didn’t get a place in a band from Tuomas Saukkonen, he would find it elsewhere. But he took the good opportunity and enough space. Saukkonen might not be a talent-seeker, but he’s a seeker of a man’s potential. He gave Lammassaari big freedom inside the well-composed songs. And the great guitarist filled the white places with the excellent performances in longer and shorter solo parts, acoustic minimalistic drawings, and colourful frescos. His solo part in ‘Boneyard’, a simple acoustic play in ‘The Flood’, or his elegant guitar solo in ‘Call of Winter’, is something which needs to be listened to over and over again because Lammassaari is simply the musician.

Joonas Kauppinen is someone, who took my breath away on this album. I do know Disease of the Nation and therefore I know that Kauppinen is talented. Saukkonen, who as a former drummer was choosing very carefully the person who would sit behind the drums, took a step away and gave Kauppinen space for doing what he’s good at. Kauppinen has a different style than Saukkonen, therefore I didn’t expect him to get such a chance to show his talent. I would expect some sort of rivalry between the drummers but this isn’t the case. Saukkonen is very self-confident and as such he is not afraid of the concurrence. And Kauppinen? He should get a gold medal for every beat. Tyhjyys moved in quality when it comes to the drum line. If I write that it sounds more sophisticated, I may scare some listeners that Wolfheart got softer. That is not true. On the contrary. They preserved their dynamics, toughness and energy. The more technical rhythmicity sound very well in this context.

Lauri Silvonen showed that he’s not behind the others. I’ve always wondered why this interesting musician known from an excellent band Bloodred Hourglass is a bit bland in Wolfheart, even though he’s very talented, moreover, his character is so lively, I expected more activity of him. And on Tyhjyys, he showed what’s inside him. The bass players are the beating heart of any band. Lauri Silvonen proves it on every track of the album. Apart from that, he is now audible next to Saukkonen. And the seeker of man’s potential is well-aware of it. The frontman knows that deep inside he’s not a singer, he doesn’t overestimate his abilities and sticks to his way of singing. His stake on his charisma was a good one but it could lose its power over time. Lauri Silvonen is a musician of a quality and he works with vocals the same way he plays his bass. His voice enriches the music just like his bass. His time hasn’t come yet but it’s clear even now that there is nothing blocking his self-expression.

There are no real weak points on the album, which never lose its breath. Every piece, from the soft beginning of ‘Shores of Lake Simpele’ to the final track ‘Tyhjyys’, has its own dynamics, some change in the stream of melody which makes it unique. There are flutes, acoustic western-like motifs, sudden changes of the pace or unexpected lyrical bits. Every track can stand on its own without the need for framing. However, there is something common, something like a signature of Wolfheart’s style, thanks to which the album sound very complex.

For example, ‘The Rift’ is so classical for Wolfheart, it makes one smile but still can be surprised by the turnings in the music. This track is a gemstone in my collection. ‘The Rift’ bewitched me completely. The four playful gentlemen managed to get literally everything a man can wish of this genre.

‘Call of the Winter’ has a potential of an absolute hit. It has a power, variety, a simple melody, a dramatic structure and a refined musical story. Saukkonen uses the charm of repeating the same motif, making it grow into the great solo and Kauppinen’s brilliant drums. Then it’s cut by an acoustic intermezzo using the keyboard. This is Wolfheart on the top of the instrumentation. 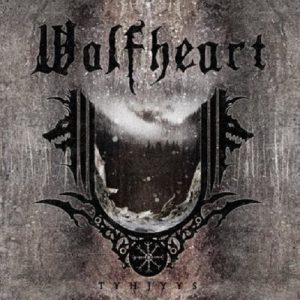 What’s left to be said about the latest Wolffheart’s album? It might be cheeky to describe the band as an instrumental number one of the year but the recording is so high quality, brilliant and pedantically lead into the perfection. So, I’ll be cheeky. Wolfheart represents the top of the Finnish melodeath. It’s performed with an exceptional maturity. The first album waded in the snow, the second ran through the forests. Tyhjyys doesn’t drown in emptiness as the name would suggest, it’s more a space underneath the wings of an eagle. Wolfheart learned to fly and now they’re teaching it their fans.

It’s a musical project on the international level. Tuomas Saukkonen managed to get another step higher thanks to his diligence and we can only dream that through listening to Tyhjyys, we become those, whose potential has been found by this talented musician and that we had been taught how to fly.