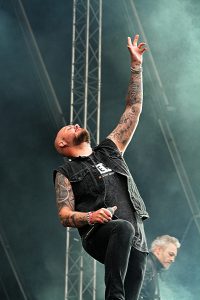 Today, I am to deal with a couple of the headliners. And speaking of them means pushing others into background although they deserve more than only being mentioned or perhaps not even that. But I will come up with some galleries of single Tuska gigs and then tell a bit more about them.

Soilwork did a great show and as I had the chance to speak with Björn I would like to spend a sentence on their great show and the love of the audience. They did deliever passion and energy. They played their tunes and shredded their riffs deep into their fans‘ hearts and there were many fans from all over honoring the musicians effort with a decent mosh pit. That’s what metal is about!

But actually yesterday’s highly expected highlights were the gigs of Amorphis and HIM.

His Infernal Majesty had announced to end their career with one last blast of a tour. And their Tuska gig was part of this tour. There is an exhibition of great photos of Ville Valo to be visited in the Helsinki Art Museum accompanying their gig. Fans have travelled to see them here in Helsinki on the Tuska stage from many places. Actually the first row was – as far as I say from what I noticed in the pit – completely taken be German fans, mostly female, no surprise. 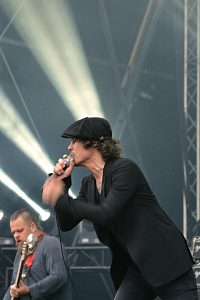 A long time ago many of us were shaken, taken, moved and/or deeply touched by the suicidal ballad „Join me“ if we had not been HIM fans before. Around that time I saw HIM on the huge stage of Rock Am Ring in 2001. It was winterly cold, the crowd was insanely in its number and rained poured during most of the shows. And still even in my spot somewhere in the last third of the crowd and although I could hardly see the people moving on stage, Ville’s radiance was well sensed. You could feel the tension in the air. You were taken by his presence. Impressing delieverance.

Yesterday was remarkably different. A thin man in a suit and with his locks tamed under a hat entered stage and while the crowd cheered I thought what happened to him? I did feel nothing of what I had expected. He stood a good deal of the time at the edge of the stage and thereby very close. He appeared shy and his voice did not always work out. He hardly moved and his radiance? Perhaps it was drowned in the massive light show? But that was only my impression. Walking around the mass, you found them all. Taken. Dancing in a close hug. Kissing. Or simply following highly focussed to his show.

Amorphis has become a very frequent act in my favourite venues at home and so over the years I have attended quite some of them. Especially if they play in one of the small clubs it has become a bit of a visit-of-their-rehearsal-place feeling. Each show I attended was a professional and solid performance at the very least. Some shows stood out of that clearly. As many of you will know there is a close relationship between the band and the managing company at Tuska and there are people in charge that were said to have a role in Niklas Etelävuori leaving the band. As his successor (at least for the shows this summer) is also the bassist he replaced back in 2000, there were many reasons to take a closer look at this show of Amorphis. 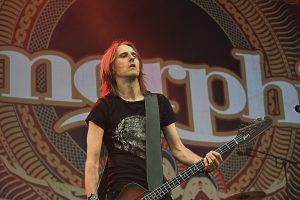 The band and their performance has changed. Pretty much, actually. The recent set list – although being still presented as part of the ‚Under the red cloud‘ tour contains now also ‚Into hiding‘ from the ‚Tales of the thousand lakes‘ and ‚Against widows‘ and a more original (closer to the album) version of ‚My kantele‘ (there were, if at all, only few shows without this song. But in the last years the song was mostly presented in a softer, a bit more accoustic version than yesterday.) If you are familiar with Amorphis music you will notice two things these songs have in common: they were released when Olli-Pekka Laine was still in the band and they all provide the bass guitar a very strong position!

He is back. And how he is back. Passionate. Inspiring. Deep into the music. And every note his bass guitar delievers asks for more stage time. The chemistry on stage has always felt good to me. But yesterday: it was a blast of joy and a band of mostly teenage friends being reunited. – Considering the background story that initiated this change I truely hope they can keep the fire burning and have come to fair terms enabling the band to focus on their music! 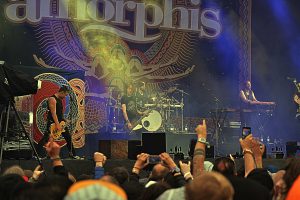 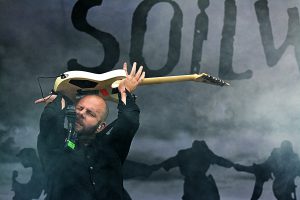